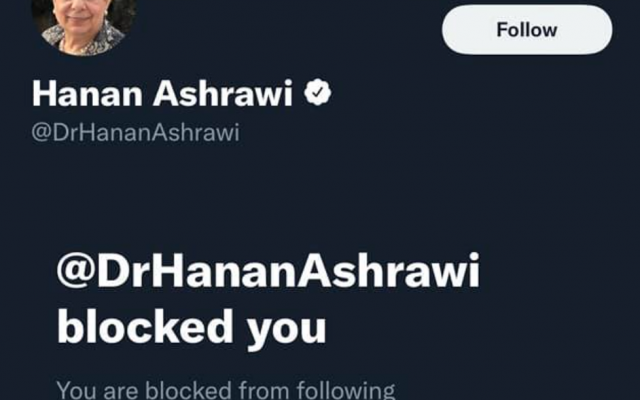 The entitlement felt by some on the left is once again rearing its ugly head in the form of anti-Black racism. Most recently terror supporter, Hanan Ashrawi referred to US Ambassador to the United Nations, Linda Thomas-Greenfield as an Uncle Tom. For those who are unaware of the term, it is a pejorative used to describe Black people deemed to not be “Black enough” in their actions and thoughts. Being called an Uncle Tom is one of the most insulting things to call a Black person- and it is especially insulting that an Arab woman who has lived her life terrorist-adjacent in her ideology would have the gall to refer to an accomplished Black woman this way.

My first instinct was to think, “how dare she,” but then I remembered the many insults I’ve (like many of my Black sistahs) received from mostly White and Arab women and men because we do not step ‘n fetch it,’ bowing our heads and shuffling in apologetic-ness. Instead, we walk with heads held high like the Black queens we’ve been raised to be. We sit at tables, and  speak up in spaces where we are often the only representatives of Black womanhood.

Linda Sarsour thought she held the privilege to determine what happened to Ayaan Hirsi Ali’s body- simply because Hirsi Ali had the bravery to speak her mind on Islam. Countless Ethiopian Israeli women proudly serving in the IDF are subjected to harassment because they exhibit pride in not only their service, but their nation. Ashager Asharo is labeled a ‘White settler-colonialist’ by those (Al Jazeera) who lack the imagination to believe that a Black woman can be proudly Israeli and a proud Zionist. A professor at Leeds University, Calvin Robinson, was called a ‘house Negro’ and a ‘coconut’ by fellow academic, Aysha Khanom because he holds conservative political views that contradict the stereotype of monolithic Black thought. Almost equally outrageous is the fact that Khanom sued Leeds University for giving her consequences for her actions-and was then defended by the same individual she slurred.

The idea that Black women do not hold individual agency to walk the world, unapologetic in our complexity and diversity perfectly illustrates the privilege and entitlement held by many.

About the Author
Brandy Shufutinsky is a social worker, writer, researcher, and advocate. She holds a Doctorate in Education from the University of San Francisco in International and Multicultural Education and her MSW from the University of Southern California. Brandy has worked towards advancing the rights of victims and survivors of domestic violence and sexual assault within the military community through practice, education, and research. Currently she is working towards developing intercultural and academic opportunities to enhance liberal democratic ideals.
Related Topics
Related Posts
Comments