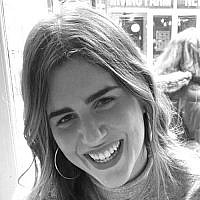 The Blogs
Ellie Bruce
Apply for a Blog
Please note that the posts on The Blogs are contributed by third parties. The opinions, facts and any media content in them are presented solely by the authors, and neither The Times of Israel nor its partners assume any responsibility for them. Please contact us in case of abuse. In case of abuse,
Report this post.

Because I don’t see anyone racing to our rescue

As my people are threatened, beaten up, lied about,

Where are you so called activists, with your unbridled passion for justice, rigour and clout?

I was born Jewish, I was raised Jewish and will now be quintessentially Jewish,

and ask those difficult pointed questions, that might make you skirmish.

Because I desperately need answers, answers only you can give me,

About why when it comes to Anti-Semitism people simply let it be.

When it comes to Anti-Semitism, it seems to be met with silence,

We continue to receive apathy, no calls for unity and alliance.

Why is that? Where are you?

Where is your social justice, calling out all bigotry follow through?

Whilst I see prominent figures quote Adolf Hitler and it’s simply called a ‘point of view’.

What about the justification of promoting age old stereotypes and accusations,

Like the Jews own all the banks and are pursing world domination?

We are blamed for others’ oppression,

For wars, attacks and even recessions.

We are called termites, likened to Satan,

The disregard for our legitimacy is blatant.

No one seems to come to our aid or derail these opinions and statements,

When it comes to Jewish hatred people seem pretty complacent.

Why don’t you fight for us? Where are you?

Where is the horror and concern when it comes to the life of a Jew?

Anti-Semitism is not anything new.

As a Jew I have normalised so many things,

The persistent worries I have and silent suffering.

Did you know I don’t tell people my full name?

That visiting Israel is not something I feel safe to publicly proclaim?

I am terrified when my parents walk home on the Sabbath at night,

My school had to be guarded by men with weapons not just a simple flashlight.

For so many baseless reasons you can actually study it at university.

Why doesn’t that bother you? Where are you?

Why is calling out anti-semitism so taboo?

When Synagogues are set on fire and swatstikas drawn on a statue?

Why is the holocaust only relevant,

When it can be used as a point of comparison or bolster a reference?

You fight for the equality, the rights, the legitimacy of so many groups and minorities,

Yet, apparently hatred of the Jewish people isn’t a priority.

How disheartening it is to process this dismissal,

When I thought you fought for all those altricial.

What you don’t seem to understand is even the groups you do fight for,

Constitute cross sections of the Jewish population yet this detail you simply ignore.

Where are you? Because this is terrifying,

We really are in it alone is what I am realizing.

Or what about when Swatstika necklaces are being sold?

And the justification for it being a buddhist symbol is all I am told?

The silence and thereby complicity is deafening,

Wasn’t this supposed to be a time of reckoning?

All I see is old tropes and anti-semitic libels going undisputed,

And the harm they cause being excused and diluted.

Leading to car rammings, stabbings, arson and other desecrations,

of life, belongings, holy sites and an entire nation.

A nation that makes up only 2 percent of the global population,

Yet endures such grave persistent animosity and detestation.

Where are you? I don’t see you condemning these acts,

Whilst our houses of prayer burn you tell us not to overreact .

When anti-semitic convicted terrorists are hosted at colleges for an interview,

Or when Jewish university students are held to the ground,

Pork rammed down their throat with help nowhere to be found.

What about when we are stabbed in our homes or shot in our grocery stores,

Innocent lives taken of those just living or out doing chores.

The only media you see,

Are articles that portray us as the enemy.

They name the assailant that was shot,

With the Jews murdered mentioned as an afterthought.

I doubt you heard about the recent attack outside a synagogue in Germany,

Or can quite understand that when I pray I do so fearfully,

Imagining every which way someone can enter and harm us,

Consistently having this downplayed and being accused of making a fuss.

Where are you? Because this hatred is dangerously potent,

I am at a loss on how to handle our many opponents.

Don’t let this be a time you come to rue.

Stand up and see us for who we are,

A people of different colours, practices, classes, sexuality, no one set bar.

Our diversity is never spoken about or celebrated,

Some stories of lineage and exile are even said to be fabricated.

What makes it unique is receiving this hatred from both the left and the right,

Hunted by white supremacists, whilst the left seemingly ignores our plight.

There are known activists and feminists condemning Zionism,

Simultaneously joking about sending Jews back to Poland to finish the ethnic cleansing.

This doesn’t irk you in any way?

Doesn’t make you want to scream – THAT IS NOT OKAY?

What is the most disappointing to me,

Is that I and other jews fight for the rights and justice of so many other groups so fervently.

It is instructed in our religion to help those less fortunate,

To question, to learn and to never be obstinate.

Whilst we are expected to go at it alone,

Criticised when we defend ourselves against bombs, knives and the throwing of stones.

Where are you when we are told we are not safe but do not deserve a homeland,

What do we do then, when incessantly chastised, silenced and no one takes a stand.

Dear friends hear my plea as a Jew,

So that that question does not become where were you?

The question my grandmother and countless others have been asking since World War Two.

About the Author
Ellie is a proud Jewish Aussie woman wading through the waves of New York City. She enjoys experiencing new cultures and meeting people from all walks of life. Ellie is the granddaughter of a Holocaust Survivor and spent 10 months living in Israel.
Related Topics
Related Posts
Comments