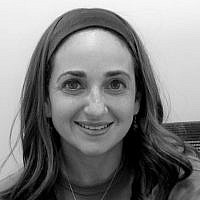 The Blogs
Ariela Davis
Apply for a Blog
Advertisement
Please note that the posts on The Blogs are contributed by third parties. The opinions, facts and any media content in them are presented solely by the authors, and neither The Times of Israel nor its partners assume any responsibility for them. Please contact us in case of abuse. In case of abuse,
Report this post.

It was a few days after the US elections when several states were still counting ballots but it was a foregone conclusion that Biden had won. As a fresh American olah to Israel, the US elections were very much on my mind, but I was surprised when I dropped my son off at school and saw his Israeli security guard also watching the news about the election in his security booth. I was surprised again when later that day, I walked into a Judaica store in Beit Shemesh where the whole store was alive with talk of Trump and the election. Enjoying the informality of the family-like environment of Israel, I contributed to their conversation and told them it looked highly unlikely that Trump would win. Their response: “We need to pray that he will.”

Israel’s obsession with Trump is nothing new. In a November poll, 70 percent of Israelis supported Trump over Biden and it is clear why. Eight years of Obama’s unfriendly attitudes towards Netanyahu and his policies of expansion of settlement policies, was hard to bear. Not to mention Obama’s parting gifts of instructions for the US abstention of UN Resolution 2334 and a large allocation to the PA. When Trump came into office, his policies towards Israel were not just a breath of fresh air, but actions and words we could never have imagined from an American president.

When Trump recognized Jerusalem as the capital of Israel, I watched the speech with tears rolling down my face; not so much from this action, but because of his statement that every sovereign nation has the right to choose its own capital. Words that are true and obvious but then a double standard has always been applied to Israel. And yet, here was a US president admitting that very obvious fact. It was so validating.

That was the first of many steps Trump took in an unbelievable four years of support for Israel, that felt almost heady at times.

The Israelis responded with enthusiasm and gratitude. They named an area of the Golan for Trump in response to his recognition of Israel’s annexation of that area. They plan to name the new Kotel train station that is under construction in his honor. The courtyard of the US consulate-turned-embassy in Jerusalem was recently named for Jared Kushner in recognition of his work on achieving peace in the region and his efforts on behalf of Jerusalem.

While Trump and Kushner undoubtedly deserve praise and gratitude for their groundbreaking policy changes towards Israel and certainly for their efforts in achieving peace in the region, I think we are partly missing the truth behind the story.

When Trump was elected, many likened this event to the Purim story. Trump, like Achashveirosh was eccentric, impulsive (Twitter-happy), and unrefined, but, like Esther, the real person running the show was Ivanka, his classy daughter who as a convert to Judaism, was pushing the pro-Israel agenda. Or perhaps it was Jared Kushner, her Modern Orthodox husband, who as a Jewish day school graduate was surely pro-Israel.

However, if one does an analysis of Trump’s previous support for Israel, as well as Jared’s personal history, one does not necessarily find him to be singularly focused on Israel and settlements. While his father’s organization has made large donations to Bet-El and his family has a close relationship with Netanyahu, one does not see a particular passion for Israeli politics in his past that aligns with the fierce pro-Israel drive of this administration. Kushner’s personal background is focused on real estate and as a lifelong Democrat, he supported Barack Obama in his first term (although he dropped support of Obama in part due to his policies on Israel for the second). I would surmise that like many Modern Orthodox Jews, his support for Israel was something learned at school and at home but not the first thing he thought about every morning.

But in whose background does one find this singular passion for Israel? Ambassador David Friedman, Trump’s attorney from Lawrence, NY, who perhaps is the true secret hero of the past 4 years.

As a former head of American Friends of Bet El and supporter of Ateret Cohanim, David Friedman was always a strong supporter of the recognition of a united Jerusalem and the expansion of settlements. When he spoke at AIPAC this past year, he spoke with passion about the great history of the biblical heartlands of Judea and Samaria (notably, not using the word “settlements”). Brilliantly alluding to the Nazi policy of eradicating a Jewish presence in Europe, he promised that under the Trump administration, Judea and Samaria will never be judenrein. He brought the crowd to their feet in resounding applause. I truly believe that Ambassador David Friedman is the heart of the pro-Israel policies of this administration.

As Trump’s attorney, he had the president’s ear. In his four years as the US ambassador to Israel, he has never tried to take the credit from Trump or Kushner and has seemed happy to allow his boss to shine, perhaps further earning Trump’s trust when so many lost it along the way. Working for Trump for so many years, he knew how to work with him.

That a Beit El/Ateret Cohanim supporter became the United States Ambassador to Israel is the true “Purim-like” miracle of the Trump administration.

Now, for better or worse, the Trump administration is coming to an end and for those of us in the pro-Israel camp, there is a feeling of PTSD as the Biden administration begins. Will Israel’s right to defend itself be questioned once again as Biden alluded to when he spoke at AIPAC last year, cautioning “both sides to exercise restraint even when it’s hard”? Will Biden’s reported choice of Dennis Ross as Ambassador to Israel attempt to “balance the scales” to the Palestinians in an attempt to achieve the ultimate but elusive prize of peace between Israel and the PA?

In the last weeks of the Trump administration, there are certainly important expressions of gratitude to Trump and Kushner for all they have done for Israel, as Israelis awaits what many see as frightening times to come.

But my tears for this outgoing administration are not for Trump and not for Kushner, but for the loss of David Friedman as the US Ambassador. It would be nice to see a nice, central location in Israel named for all the support he has given to our Jewish state.

About the Author
Ariela Davis is an Israel/Jewish educator. Before making aliyah with her family in 2020, she served as a Judaic director and communal Jewish leader in the U.S. and currently serves as the Menahelet of Ulpanat Orly in Bet Shemesh. She is a freelance writer, editor and speaker about Israel and Jewish topic.
Related Topics
Related Posts
Comments