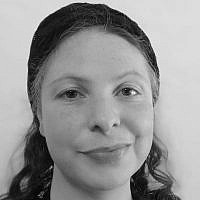 The Blogs
Tuvit Shlomi
Apply for a Blog
Advertisement
Please note that the posts on The Blogs are contributed by third parties. The opinions, facts and any media content in them are presented solely by the authors, and neither The Times of Israel nor its partners assume any responsibility for them. Please contact us in case of abuse. In case of abuse,
Report this post.

The image of shot Palestinian journalist Shireen Abu Akleh lying on the ground keeps running through my mind. I’m preparing breakfast and there’s a knock at the door. Do I have work, asks a tall, wrinkled stranger in heavily Arab accented Hebrew while calling on his cell-phone; work, gardening, anything? I don’t. He offers me a sixty percent discount without ever having mentioned a price. See, I think in the end, most of us in this region are just simple human beings trying to live their life. The next moment I think I’m an idiot; a terrorist recently murdered three people in this West-Jerusalem neighborhood – and all murders were committed in apartments of people who had their door open.

What was I thinking? Just because the plumber is about to take care of the outdated gushing toilet in our gardenless, crumbling, rented apartment, does not mean I should open the door just like that without checking who is there.

What has really been bugging me about this situation – besides the fact that a journalist got killed- is the terrier-like way news outlets bite into this situation. We, truth seeking news consumers, the people of this region and of the world, deserve better than a shallow continuation of this conflict because journalists can’t reach beyond their own Pavlovian knee-jerking.

First and foremost – Abu Akleh’s employer, Al Jazeera and the PA: Al Jazeera has decided that Israel has killed the journalist. Based on what? No clear video evidence of the person firing the shot has been released. True, there were three eye witnessing journalists and they say it must have been the Israeli army because “there were no Palestinian militants immediately near to the journalists.”

What is ‘immediately near’? She was covering riots between armed Palestinian militants and the Israeli army. In crowded urban territory. How far away could they have been?

Autopsy by the Nablus based Medicine Institute did not render conclusive evidence about the source of the killing. Local examination of the bullet is still underway.

Yet, Al Jazeera and the PA already decided long before, that Israel has killed Abu Akleh.

“…people know there’s not going to be any accountability towards those who killed her,” Al Jazeera reports; “Palestinian officials and the Al Jazeera Media Network insist that Abu Akleh was shot by Israeli forces.”

Lazy journalists and an upset news consuming audience parrot that message. And that, in an area that is generally explosive, in a situation that is already tense – is no less than a direct threat. It could very well lead to intensified violence, attacks, extra loss of innocent lives.

Why does no one address this?

Meanwhile in Israel – news outlets report on the responses to Abu Akleh’s killing: responses in the Arab world, responses of Israeli Arabs, the PA and – importantly – America and the world: who says Israel has done this? How does this damage Israel’s image?

Journalists – your colleague has just been killed . All you can think of is whodunit?

Why aren’t you upset because a journalist has been killed on the job? Why do you not try to speak to the eye witnesses, or report on how she covered, on how ‘immediately near’ to the riots she really was? What did her kind of coverage entail, what did it look like on the ground? What dangers come with the job and from where? What does it mean to be an icon in the news field – what does it mean that such an icon gets killed? How does news spread after a statement such as the one made by Al-Jazeera and the PA? How has the Israeli army dealt with journalists in the past? And Palestinian terror organizations and rioters, how have they related to journalists throughout the years?

Why does no one address this?

No journalist has to forsake their frame of reference in order to address these questions; the only thing they need to do is to be honest about having one. It is not easy to transcend the common, the usual, one’s own reality. But don’t true critical journalists want to be more than a mere parrot?

The results are not at all trivial: internationally, pro-Palestinian and anti-Israel talkbacks often address the video that leaves no doubt that Israel killed Shireen. I’ve looked for such a video. To the best of my knowledge it does not exist. But all those people behind the talkbacks have made up their mind. Slurs with terms like revenge, genocide and apartheid get repeated over and over again. Pro-Israeli talkbacks self-righteously dwell in accounts of Arab terror and neatly cite a list of historical talking points over and over again. Everyone is talking past each other, because no one has the courage to ask questions.

And if this region is ever to see change – it is because of such courage: questions matter for people’s perspective.  Journalists who manage to get unstuck from the narrative of their own backyard are the ones to ask those questions.

It takes guts to be critical. Much in this region is about guts. Some people here, hate each others guts. Some act upon those feelings, others don’t. But most people have many gut feelings about those that aren’t part of their version of the narrative. Just like my gut feelings when I opened my front door, to find a tall Arab stranger behind it. It is one thing for private people to get stuck in these feelings, but of critical journalism I expect better.

The power of the sword is clear; one should not underestimate the power of the word. Pens, screens and voices have been, and are still, underrated. They themselves are, or can be, swords.

Regardless of anybody’s frame of reference, that would be a respectful way to give meaning to the death of  journalist Shireen Abu Akleh and others who have died in harness.