The Blogs
Ziona Greenwald
Apply for a Blog
Please note that the posts on The Blogs are contributed by third parties. The opinions, facts and any media content in them are presented solely by the authors, and neither The Times of Israel nor its partners assume any responsibility for them. Please contact us in case of abuse. In case of abuse,
Report this post. 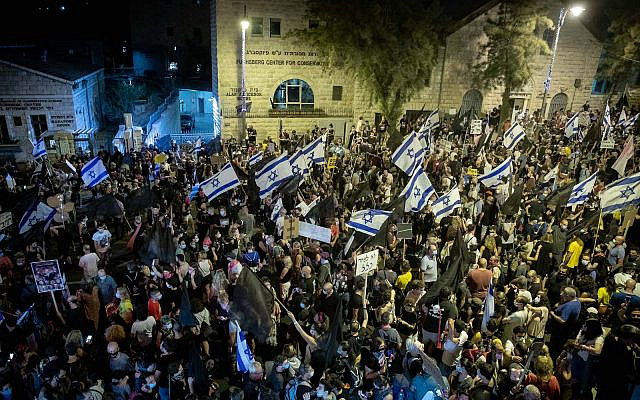 On its rapacious march across the globe, coronavirus came charging through our country, dismantling norms and normalcy and sowing hardship way beyond the medical kind. Seeking, at times haplessly, to stem the tide of infection, the government has taken the liberty of taking away many of ours. This turn of events raises many vexing questions. Among them: What rights do we as citizens of Israel have? Which ones may public health measures eviscerate, and which – if any – are absolute, not to be tampered with no matter the circumstances?

Just as we don’t all agree on what is right, we don’t all agree on what our rights are, their contours and respective place in the hierarchy of civil society. Even in the U.S., where a Bill of Rights enshrines personal and collective freedoms, interpreting and ordering those rights fills court dockets and leads at times to boiling tensions within the populace. Here in Israel, absent a written constitution, our freedoms are far more easily de-prioritized and overwritten. Israel is a democracy which sometimes behaves otherwise.

As thousands fill the streets each Saturday night to raise their voices in protest against Netanyahu, thousands of others look on and wonder why they cannot gather with their extended families and friends for special occasions or join with an uncircumscribed group of worshipers on Shabbat and the High Holy Days, even outdoors and with masks and social distancing. Why, while thousands packed the public square, did I have to cancel my only son’s bar mitzvah party this summer because of government regulations that left no room for reasonable accommodation on the part of event hall owners or prospective celebrants?

Echoing a common refrain, the editor of the Jerusalem Post argued in his weekly column last week that the right to protest in public is somehow sacrosanct above all others. “In a democracy, the right to protest is a basic and fundamental right, just like freedom of speech. Protesting at home – like people can pray at home or in smaller numbers – is like not protesting at all. Limiting protests to smaller numbers like prayer services does not meet the standard of what a public protest is meant to be…” Unlike protesting en masse, he concluded, “Flying to Uman is not a basic right in a democracy, just like holding weddings with hundreds of people is not.”

This circular reasoning raises more questions than the one it purports, but fails, to answer. Why is the right to public protest – the nexus of freedom of speech and freedom of assembly in Bill of Rights-speak – more inviolable than other rights? If rules can be imposed governing protests, why can’t those same rules apply to other types of gatherings which are equally if not more important to thousands of citizens? Why is private protest, or protest in smaller groups, akin to no protest at all? Especially in today’s networked universe, public speech is not limited to the public square.

Further, are not the rights to privacy and freedom of movement as cherished and fundamental as freedom of speech? Why then is the government allowed to cancel those rights by tracking my whereabouts through my smartphone and limiting the distance I can walk or drive (measures which are not only antidemocratic, but also ineffective)?

Israel’s government has appropriated freedoms that it might not easily relinquish or, thereafter, hesitate to seize again. (That alone is reason to protest loudly!) While editor Katz is correct that not everything is a basic right, he is wrong to elevate one such basic right above the litany of others that have fallen in the government’s rather sickish war against coronavirus. Sadly, unlike most of those infected, our democracy might never recover.

About the Author
Ziona Greenwald, J.D., is a contributing editor for The Jewish Press and a freelance writer and editor. Her second children's book, Tzippi Inside/Out, will be published soon by Targum Press. She feels grateful to be living with her husband and children in Jerusalem.
Related Topics
Related Posts
Comments