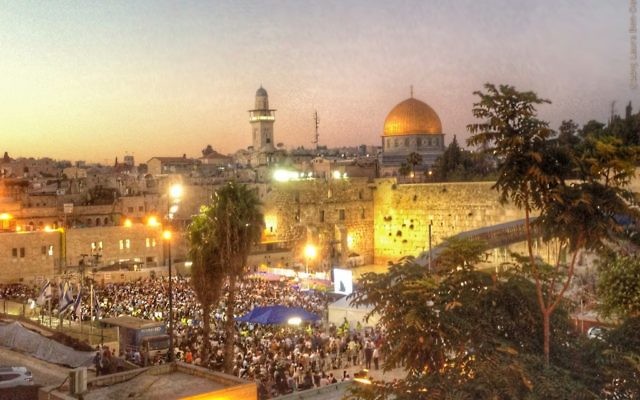 We Israelis have very short memories. We tend to forget our struggles and take things for granted in no time at all. It is part of what helps us survive and keep going. It is what fuels the “yihiyeh b’seder”attitude, it will all be okay. But sometimes, those short memories lead us to forget just how bad things were. Sometimes we need to remember just so they never happen again. Imagine that just 50 years ago, a Jew could not go to the Western Wall. At all. The Old City was off-limits to Israelis and any Jews. OFF-LIMITS.

Take a moment and imagine: it is 50 years ago. You are a Jew taking a much-awaited trip to Israel — to the Holy Land. Though you have never been there, your itinerary does not include the Western Wall or any part of the Old City of Jerusalem. You cannot meander through the ancient stone alleyways of the Jewish Quarter. You cannot walk around the magnificent crenelated walls, overlooking both the golden Old City inside, and the majestic views outside where generations of Jews before you walked to the Temple, prayed en masse, and cried on their way out to exile. You cannot make your way to the Western Wall — the Wailing Wall — to pray, to put a little note in one of the deep crevices, full with the hopes and prayers of your sister and brothers, that seem to be a portal directly to God. No, a Jew could not go there at all because under Jordanian occupation of what they called the “West Bank,” and what is historically Judaea, Samaria and Jerusalem, Jews were banned completely from these areas. Imagine, the Old City of ancient Jerusalem being off-limits to Israelis and any Jews.

Then, in 1967, the most unexpected thing occurred. So unexpected that Israel had not made any plans for such a contingency. As the Six Day War unfolded, and Israel was defending itself on multiple fronts, suddenly the liberation of Jerusalem from Jordan seemed to be a real possibility. With lightning fast battles and decisions, in a war Israel never wanted and a goal they never dared to dream, suddenly Jerusalem was theirs. Watch the epic clip where paratroopers finally reached the Western Wall, and Motta Gur, Commander of the 55th Paratroopers Brigade and Former IDF Chief of Staff announces “The Temple Mount is in our hands…” I don’t know about you, but I tear up every time…

Now, 49 years later, things have gotten complicated. Everything in Israel is complicated…. Jerusalem is the symbol of the entire conflict between Muslim Arab and Jew, and nothing happens there without commentary. But rejoicing at having Jerusalem — our beloved Jerusalem — should not be complicated. Celebrating the fact that you can go freely throughout the Old City regardless of your religion, that you can pray at the Western Wall no matter how you pray, in what language or even if you don’t pray at all… I’ll leave the quibbling over customs to other people at other times. Jews — and people for that matter — will always find something to quibble over. But the rejoicing of a people returned to the city they prayed and wept over for 2,000 years? That is evergreen.

I remember participating in the joy and excitement of Jerusalem Day as an 18-year-old. We marched through the streets of Jerusalem, quite late at night as I recall, singing and dancing all the way to the Kotel (Western Wall) where the joy — 20 years after all of Jerusalem, the Old City, the Western Wall were all finally united in Israel’s hand — was palpable as though it was news from that day. 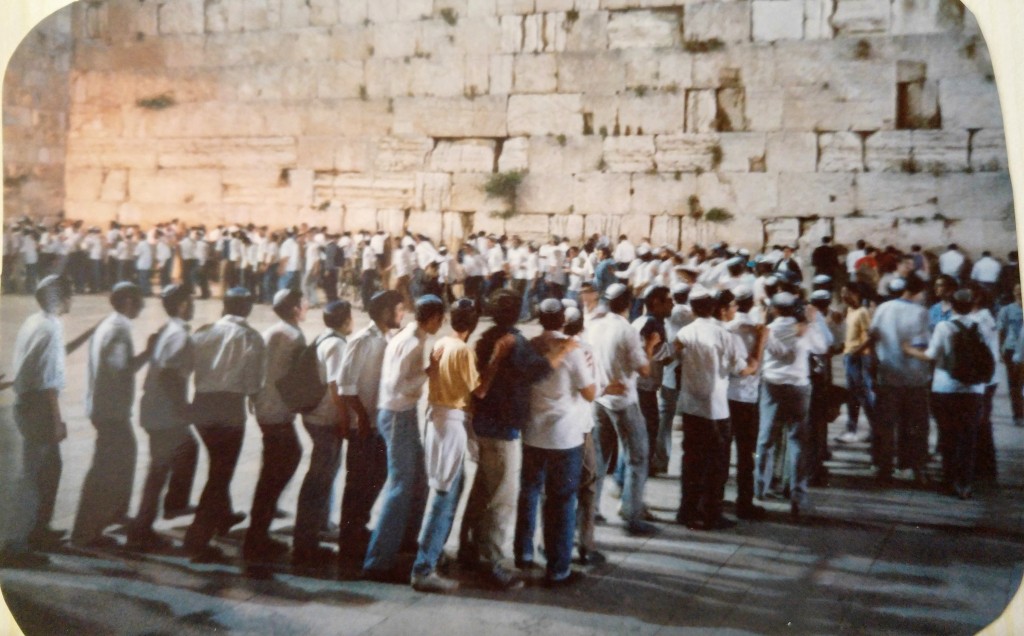 Now it is nearly 50 years since its liberation. And we are still dancing in the streets. We are still celebrating our unadulterated joy on Jerusalem Day — and every other day.

Is it perfect? Definitely not. There are people who see Jerusalem Day as an opportunity to advance their own agendas, or as an outlet for hate and discrimination against the Arab population in the city. This is not a new development. How do we fight it? By canceling the march? By stopping all of the unbridled joy and putting a muzzle in the mouths of our singing, elated youth? Of course not! By drowning out the haters. By demonstrating what our love for Jerusalem really is! By calling out those who would ruin our holiday with their racism and fanaticism. By not tolerating it for a moment. Even by making another march — a better march that is more inclusive. I’m fine with that too. But to let the haters take over — on ANY side? Never.

A friend of mine told me her 17-year-old son goes to the Jerusalem Day march every year. He has told her that he’s heard the stupid, racist things that some people on the march say. But that is absolutely not why he goes and he tells them to stop. He marches because it is his expression of gladness, of appreciation for the day and what it means to us. And the stupid racists are saying their stupid racist things wherever they are anyway. My friend and I both believe that Arabs should have full rights. And that businesses should not have to close to accommodate the celebration. But this IS a celebration. And trying to turn it into something else is a travesty indeed. 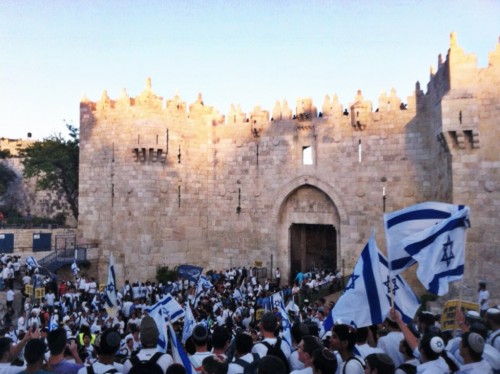 It is our Jerusalem, and that means making it the best Jerusalem it can be. She is the city of peace, with freedom of prayer and religion for all. It says in the prophecies that all people will call God’s name from Jerusalem. Inshallah, and B’ezrat Hashem, it should be so, but it will only be so if we all have pride and respect for one another.

I can’t fix it all, but I’m just happy to have my Jerusalem. You should be too. 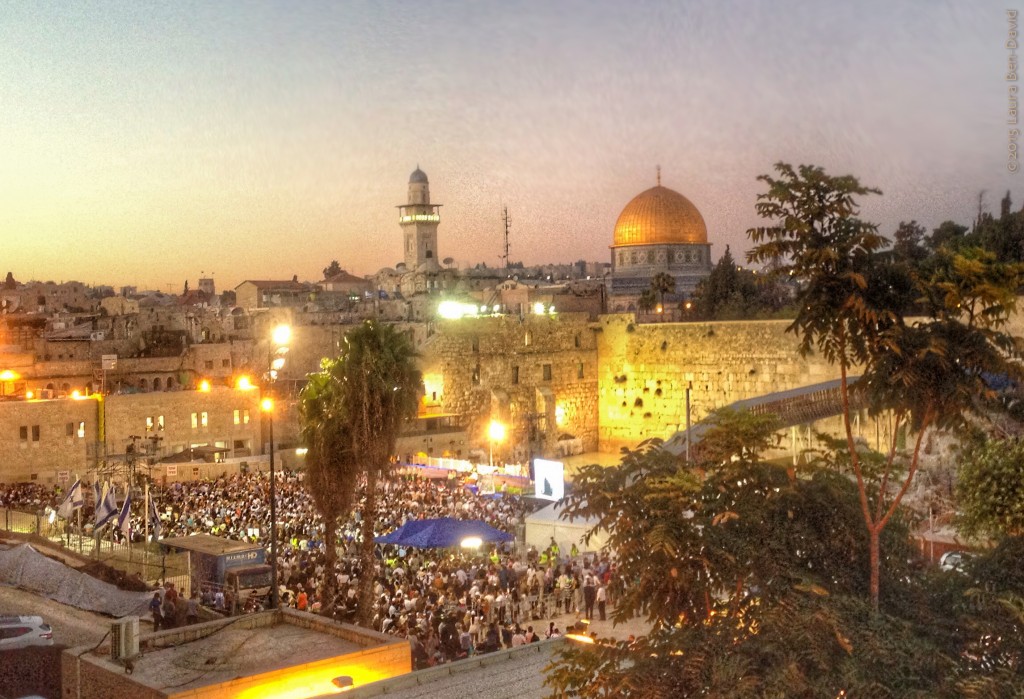 Our beautiful Jerusalem. (Courtesy: Laura Ben-David)
About the Author
Laura Ben-David is a photographer, public speaker and Israel advocate. Inspired by her Aliyah experience, Laura began writing and never stopped. She is the author of the book, MOVING UP: An Aliyah Journal, a memoir of her move to Israel. She has spoken all over the world about Israel, Aliyah and other topics, often with beautiful photographic presentations. Formerly the head of social media at Nefesh B'Nefesh, Laura is the director of marketing at Shavei Israel as well as a marketing consultant.
Related Topics
Related Posts
Comments