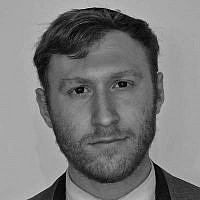 The Blogs
Saul Levene
Apply for a Blog
Advertisement
Please note that the posts on The Blogs are contributed by third parties. The opinions, facts and any media content in them are presented solely by the authors, and neither The Times of Israel nor its partners assume any responsibility for them. Please contact us in case of abuse. In case of abuse,
Report this post.

Does Britain care about antisemitism? We profess to, and the value of protecting ethnic minorities is part of a desire for social justice that characterises western, liberal democracies.

However, the entire thesis of Times’ Book of the Year “Jews Don’t Count“, by author David Baddiel, argues that Jews are often excluded from conversations around racism and victimhood. He makes a case for an “antisemitism by omission”: that the exclusion of Jews from conversations involving race and victimhood is because of pre-existing stereotypes associating Jews with power, wealth, and influence.

Baddiel argues that we don’t sufficiently hold public figures to account for antisemitism in the same way that we do for other forms of racism. He cites the lack of attention and outrage that was directed as actor John Cussack for retweeting an anti-semitic tweet about Jewish power. Albeit, Cussack was later forced to apologise.

Despite representing less than half a percent of the UK’s population, violence against Jews is disproportionately high and on the rise, with antisemitism accounting for over one in five religious-based hate crimes. Since last year’s Israel-Palestinian crisis, hate crimes against Jews have reached an all-time high in the UK.

The current climate sees antisemitism as a purely religious hatred, but this is missing the historical reality. Nazi eugenics was based on ethnic and racial lines, and even further back, Jews who converted to other religions, such as Catholicism, were still persecuted due to their ethnicity. Bearing this in mind, it’s hard to understand why Jews aren’t seen as an ethnic group in the same light as other minorities.

Around the time of the National Census in 2021, a BBC panel debated whether or not Jews should count as an ethnic minority group, with 4 out of 5 panellists being non-Jewish. The lack of representation from the Jewish community on an issue that directly affects them caused palpable backlash.

Currently, Jews aren’t considered as part of the BAME (Black, Asian & Minority Ethnic) categorisation within the UK. Indeed, the BBC controversy echoed a similar conversation in the US about whether Jews should be considered “white” and privileged or vulnerable as an ethnic group.

This simplistic view of race seems to argue that the colour of one’s skin defines their racial status. Many Ashkenazi Jews are “white-passing”, making up the majority of the Jews in America and the UK. But white supremacists definitely don’t view Jews as white, and historically “looking non-Jewish” has never been a way out of persecution. So why is it so difficult to call a spade a spade?

This failure to take antisemitism seriously in institutions has caused a Jewish broadcaster to resign from the BBC over “inexcusable” antisemitism concerns and ferment a harmful environment for British Jews.

Similarly, the BBC was unwilling for two months to issue a revision of its story that Jewish victims of anti-Semitic abuse on a Central London bus were “shouting anti-Muslim slurs”, after the BBC’s editorially independent Executive Complaints Unit partially upheld complaints into the BBC coverage.

Indeed, The Campaign Against Antisemitism group said: “It took the BBC two months and four pages to deliver a whitewash non-apology that stands by its spurious reporting of an anti-Muslim slur and dismisses the monumental offense generated by its coverage.”

If we look at university campuses, we see that this aversion to taking antisemitism seriously plays out very similarly. The incident involved Professor David Miller at Bristol University should spring to mind immediately. After suggesting that British Jewish students were “pawns” of the Israeli government, Miller’s dismissal was long and drawn-out, with Bristol University eventually concluding that he did not adhere to expected standards of behaviour.

While speaking in the House of Lords, Baroness Deech argued that had a professor “hurled similar abuse and conspiracy theories at black students” he would “have been off campus by evening”. However, only after years of complaints from Jewish students, did the university finally take action. Even more recently, student unions at Queen Mary’s and the University of East Anglia are epitomising a trend throughout the UK of non-Jews attempting to redefine antisemitism without even consulting Jewish students.

Jews, like any other minority group, should have the right to define their own oppression, rather than having others make this decision for us. Again, if we imagined this incident transpiring to another ethnic group, we would understand how ludicrous this is. If an organisation attempted to redefine what racism is towards black people, yet didn’t actively consult black people within that organisation, we would easily identify the racism involved.

Most organisations and universities in the UK have accepted the IHRA definition, for good reason. Although it is not perfect – it is a working definition, meant to be updated – it provides an important metric to identify antisemitism. It matters hugely that universities like KCL have adopted the IHRA definition; and it is appalling that there are those, like the KCL Students for Justice for Palestine (SJP), and others who want to destroy this monumental step forward. Jews, like any other minority, should have the right to define their own oppression, rather than having others make this decision for us.

Should Jews become part of the BAME umbrella? Should we be changing the way we view antisemitism and the status of Jews as an ethnic group? Why is there no comparable outrage to instances where Jewish voices are not being consulted in defining their oppression? We must challenge the assumption that Jews don’t count as an ethnic group if we care about social justice as an enterprise, and question why some believe Jews aren’t worth equal consideration.