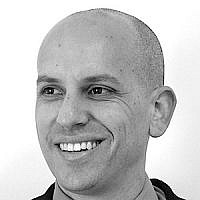 The Blogs
Tal Sagie
Apply for a Blog
Advertisement
Please note that the posts on The Blogs are contributed by third parties. The opinions, facts and any media content in them are presented solely by the authors, and neither The Times of Israel nor its partners assume any responsibility for them. Please contact us in case of abuse. In case of abuse,
Report this post.

When I was 7, I was miserable. I hated going to sleep at night because I knew that I was probably going to wake up soaking wet. I felt like a complete failure, a baby, a child who was disappointing his parents, who couldn’t make it through the night without having an accident. I shied away from slumber parties with my friends because I would probably have an accident there as well and be mortified and mocked by my friends for years.

I couldn’t understand why this was happening to me. I was fine during the day and was a normally healthy child. So what was wrong?

After years, my father took me to doctor after doctor, test after invasive test, and all came back negative (which medically speaking, I was very thankful for), leaving us with practically nothing to do other than ‘wait it out’.

Thankfully, my father understood that punishing or shaming me for this problem wouldn’t help me stop ‘being lazy’ and teach me to ‘be more responsible for myself’. Turns out he had the same problem as a child and remembered the disappointment and frustration it caused him. So he took matters into his own hands. Granted, my father was no stranger to the sciences and was a trained family behavioral therapist. So instead, he shifted his focus to study and research nocturnal enuresis, commonly known as bedwetting.

And thank goodness he did. His research showed that while most people eventually do grow out of bedwetting, it could be after years of spending money on pull-ups and daily laundry loads…not to mention the added distress caused to the child. However, he found the process could be sped up with the help of external stimuli COMBINED with behavioral therapy techniques. With this new method, the percentage of success from using a bedwetting alarm was nearly doubled! And we never looked back.

But truly knowing the feeling that millions of other children and teens were suffering the same way I did, was not something I could easily forget. After my father took his technique and opened up enuresis clinics all around Israel and eventually in the United States and even China, more than 30,000 people have him to thank for changing their lives.

And once my own children showed the signs that they were part of this unfortunate club, I knew I had to jump in the ring myself and do my part to help reach even more children.

Which is why I won’t stop talking about bedwetting – while millions of other parents and children and teens suffer needlessly in silence.

I will keep advocating for pediatricians to give the support to parents when they ask for help. I will continue to stand up against unnecessary medication, invasive tests and pull up diapers that don’t solve the problem, only mask it. I will shout from the rooftops trying to explain to parents that this is not something the child would ever want to do on purpose and don’t deserve the punishment and humiliation thrust upon them.

So if you were like me, or your child is, please – educate yourselves about the condition and research the options available to you. Don’t be afraid to ask questions and never take no for an answer. Make sure your child feels your support and love. Reach out to other parents – chances are they are dealing with the problem as well.

This is your child. Knowing that this is a condition which is treatable, it’s your responsibility to make sure that it’s not only acknowledged as such but comprehensively, effectively and safely addressed.

About the Author
Tal Sagie is an enuresis treatment specialist since 1999 helping more than 8,000 patients worldwide and developer of TheraPee, the first interactive web based software program to treat bedwetting.
Related Topics
Related Posts
Comments