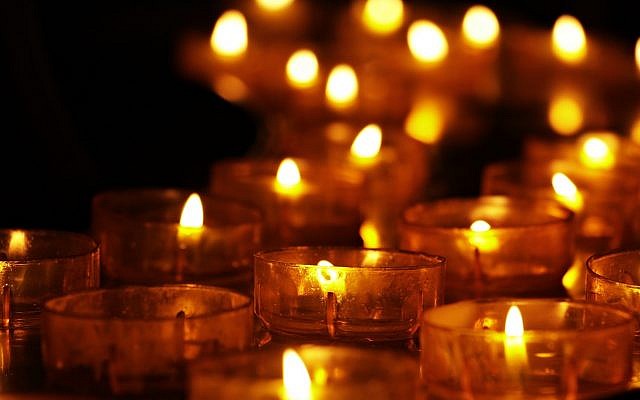 I have watched the televised ceremony at Yad Vashem every year for the last 41 years since returning to the nation of my birth. Five minutes before the ceremony, I light two yahrzeit candles – one for my mother’s side and one for my father’s side. For the grandparents I never knew. For my maternal grandmother’s nine siblings, my mother’s brother, my father’s brother and sister, all their unborn offspring, all the missing cousins, aunts, and uncles at my family’s Seder. For the childhood that my parents never had. And for the childhood that was stolen from me.

Then I wait. For the ceremony to begin. The ceremony was pre-taped this year to preserve social distancing amid the coronavirus pandemic. The president and prime minister will deliver speeches. The IDF cantor will sing El Malei Rachamim. The official torch at Yad Vashem will be lit. As will the six torches of Holocaust survivors whose stories will be told. The ceremony will not take place before an audience of dignitaries, Holocaust survivors, and their families. But that is not why I won’t be watching or saying Kaddish with the rest of the nation in front of my television.

I cannot watch the ceremony because the prime minister who will deliver the central address tonight still shares the Prime Minister’s Residence with a man who wishes me dead. A 28-year old man who tweeted the following will sit next to the prime minister: “I hope the elderly who die following this protest will only be from your camp.”

In fact, the prime minister raised this man, his son Yair Netanyahu. And has refused to publicly rebuke him or gag his son for posting a series of incendiary tweets, including accusations that Knesset Speaker Yuli Edelstein and President Reuven Rivlin orchestrated coups against the prime minister and for posting a quintessentially anti-Semitic meme, captioned “the food chain,” featuring a photo of George Soros dangling the world in front of a reptile dangling an alchemy symbol. But Yair Netanyahu’s latest tweet politicizing the deaths of coronavirus victims is the most personally hurtful to me.

It is an affront to the many leftist Holocaust survivors who went straight from the Ma’apilim boats in Jaffa and Haifa and Atlit to the Battle of Latrun – only to lose their lives. It is an affront to other survivors, leftists who left kibbutzim as young orphans building a new life from the ashes to fight for our independence.

It is an affront to my father, Josef Spiegel z”l, who survived Theresienstadt and Mauthausen and Operation Kadesh – the latter with a bullet that went clear through his thigh. My father voted Mapam.

And it is an affront to me. He wants me dead too, a 65-year old grandmother who returned to an Israel that she had left as a toddler, alone in her 20s. A leftist who sent a husband and daughters to the IDF, and who served as a nurse for decades – much of that time in the Health Ministry.

Many of my colleagues would have attended the protest that prompted Yair Netanyahu’s tweet − a protest against the erosion of democracy under his father’s stewardship of the coronavirus pandemic. But they were too busy doing endless shifts in inadequate conditions, caring for the sick and scared and replacing family at the deathbeds of people from Yair’s political camp and my own. They do not give their patients’ politics a second thought. I never did. How can he?

Holocaust Remembrance Day can never heal the hole in my heart. But there is some comfort in watching the official ceremony, in standing for the siren, in knowing that the nation stands with me, in knowing that I am not alone. This year, that would be cold comfort indeed. I am quarantined with my husband and separated from my children and grandchildren. The only thing that could make me feel more lonely than I already do on this Holocaust Remembrance Day is listening for leadership, inspiration and comfort in the words of the man who raised Yair Netanyahu. I cannot look into the father’s eyes without seeing the vacant blue eyes of the son who wants me dead while I say the Kaddish mourning prayers for the ghosts that would have been my loved ones.