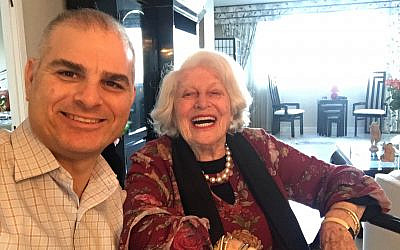 Starting this year I will be adding another day to my calendar and will celebrate Holocaust Survivor Day. A new initiative which will take place every year on June 26th (this year on the 24th because of Shabbat), I am adding it to my calendar because it fills a void that I have somehow felt over the years — a day dedicated exclusively to survivors. Yom Hashoah is intense and somber, as it should be. The day has taken on for me and my family an almost religious flavor of prohibiting any joy, adding special commemorations to my prayers and lighting a candle of memory. Survivors are an aspect of the day but they are part of the story of death and destruction of European Jewry — witnesses to the tragedy.

Holocaust Survivor Day aims to focus not on the solemnity of the Holocaust but on the resilience of those who survived; not crying for what was destroyed but rejoicing with those who managed to survive and keep on living their lives despite the past. If Yom Hashoah is my personal ‘Tisha Bav’, HSD will be my ‘Simchat Torah’, except I will not be dancing with the Torah but with my grandmother! I am very fortunate to have Oma (my grandmother) still in my life and I intend to (at least virtually) dance with her on this day.

Growing up with both sets of grandparents originating in Poland, the Holocaust was never far from my mind, but each side showed me a different perspective. Though my father’s parents both emigrated to New York before the war, they lost scores of relatives in the Shoah — grandparents, mothers, brothers, cousins — the loss was palpable. At my grandfather’s Shabbat table, every time he would make kiddush tears would well up in his eyes, as he remembered all he lost. From him I learned about the majestic rabbinic Polish nobility I come from and the tragic story of its near demise, together with millions of other souls.

My mother’s parents, however, taught me a different story, a story of survival as well as ‘surviving the experience of a survivor’. Both my grandparents had remarkable journeys of survival during the holocaust: my grandmother, Margot Ganger (nee Ferber), was sent by her mother (her father had been killed as a result of Kristallnacht) to London via the Kindertransport which saved the lives of thousands of Jewish children. At age 92, she vividly recalls the decision her mother made to send away her two children and the loneliness she felt spending the war in England and having to relocate from London to the countryside during the Blitz!

My grandfather, Joseph Ganger (ob”m), escaped with his father during the early part of the war, heading east and keeping one step ahead of the Nazis. He found his way to Kaunas and heard about a miracle man — Japanese diplomat Chiune Sugihara — who was saving Jews’ lives by issuing illegal visas. Having used up all their money getting to Sugihara, they were given the golden visas and found their way to Shanghai where they spent the war.

From both of them, I learned a different perspective on the Holocaust. I learned about their challenges of staying alive during the war and then the postwar rebuilding of their lives, finding each other, starting a very successful business, and building a family. They taught us about the seemingly limitless capacity to emerge from the depths of tragedy and to live a ‘normal looking’ life. They taught me in their actions, their decisions, and their attitudes the meaning of survival. It meant never forgetting the past but at the same time being laser-focused on a future, on building lives, on maintaining the traditions of their heritage but shaping a new legacy for their children and grandchildren.

Holocaust Survivor Day celebrates those remarkable individuals who not only survived the Holocaust but forged ahead, rebuilt their lives and continue to be beacons of light for their families, for the Jewish community and for the world. It is a day to acknowledge the impact they have had on our lives and to give back to those who are still with us. Each of us knows of a survivor in our community who deserves our support, whether it is a phone call before Shabbat, a visit, or financial support to those in need. It is a day to raise up this holy shrinking community and let them know how much we value them and love them.

Holocaust survivors helped make me who I am. I owe them a tremendous debt. As do we all.