There has never been a moment in my generation’s lifetime when Tisha B’Av was more relevant. The crisis of refugees from Syria and other war-torn countries has overwhelmed European political systems and threatens to overwhelm our own. We think of Tisha B’Av as a time of mourning, but Tisha B’Av is most importantly about identifying with the experience of the refugee, about being thrown into a hostile world without shelter or protection. That’s what happened to the Jewish people when the Temples, along with the nation and society they stood for, were destroyed.

Perhaps, dear reader, you were taught that Tisha B’Av is primarily about mourning the end of sacrifices or the destruction of the Temple. If so, then your lessons were incomplete. Chazal, the rabbis and sages, may they be blessed, figured out how to live without a Temple long, long ago. Mourning isn’t even a good description of how we actually observe the day. What we think of as Tisha B’Av’s “mourning customs” — not wearing fresh clothes, not washing, not eating or drinking, not being able to sit down — much more closely resemble the experience of a refugee than of a mourner sitting shiva.

That’s why I want to respond to Rabbi Elyse Goldstein, who declared in the Times of Israel blog pages that she won’t be fasting for Tisha B’Av. She explains that fasting means mourning for a Temple that, if reinstated, could only do harm, because it would be controlled by priests who think like the rabbis now controlling the Kotel (the Western Wall), who oppress women who want to pray together and denigrate the non-Orthodox branches of Judaism that Goldstein and I are part of.

Goldstein further writes, “While we are mourning the destruction of a mythical ‘unity’ — one we never had, with the infighting of the Pharisees and Sadducees, Essenes and Zealots to name a few — we are blinded to the reality of destructive narratives in both Israel and the Diaspora today.”

I couldn’t agree with Rabbi Goldstein’s argument more, but I couldn’t disagree with her conclusion more either, because that describes why we need to fast, not why we shouldn’t. Tisha B’Av is not about the Temple’s destruction, but about what happened after: homelessness, fleeing from war into famine and worse — things that are all too present in our world. 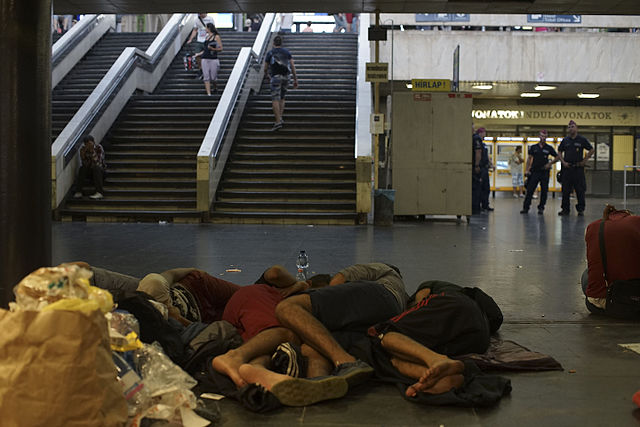 That’s also the tenor of the book of Lamentations, which describes being driven “like deer with no hope of finding pasture, walking without strength ahead of the pursuer.” (Lam 1:6) This distinction matters so much that I’ve spent years working on and off to provide people with a fresh translation of Lamentations that would bring these points home. (You can download the current version of that translation from neohasid.org.) I do that work because I’m convinced we need to learn everything we can from the real Tisha B’Av.

What was lost on Tisha B’Av was not the Temple, or some mythical unity of the Jewish people — according to our sages of old, these were already lost causes before the Romans ever laid siege to Jerusalem. What was lost for our ancestors was the possibility of being at home in the world. The rabbis never imagined that the unity of the Jewish people was destroyed on Tisha B’Av. Quite the opposite: it was sinat chinam, pointless hatred, that the real rabbis said caused the destruction of the unity of the people and of the second Temple. The current of hatred that comes the rabbis who are in charge of the Kotel is drawn from the same poisoned well.

That hatred has the potential to destroy the Jewish people again. The more the evildoers among Israel’s zealots and fanatics and politicians fan hatred against the non-Orthodox — and much worse, hatred against the non-Jewish populations under Israel’s control (and actions that derive from such hatred, like the proposed demolition of Susya) — the more possible that destruction becomes.

In other words, all the conditions that Goldstein is decrying today are the reasons why we destroyed ourselves back then, long before the Babylonians or the Romans destroyed our Temple. That’s not just a modern interpretation of Tisha B’Av but an ancient one. We are destroying ourselves again. That’s why we need to fast on Tisha B’Av.

Of course, it is still true that a part of the Tisha B’Av experience includes mourning for what has been lost, and mourning for what the ideal Temple should have been: a place of life-giving fertility and humanity. By the same token, that’s not what the real Temple was, which is why Goldstein rightly celebrates the rabbinic revolution that the Temple’s destruction made possible. That revolution not only created a Judaism that no longer needed the elite castes of the royal court and the priests, it also that ultimately made Torah our birthright.

But it’s easy to celebrate looking backwards at how things turned out. That’s not the truth that people lived in when it happened. Even in the land of Israel, we were refugees after the Temple’s destruction. And what’s also true is that everything could have worked out otherwise. Had there not been a Rebbe Yehudah Hanasi to placate the Romans and lead a great leap forward, it could have ended with Torah being snuffed out.

In this day and age especially, we need to remember how tenuous our survival was. We are again facing the possibility of spiritual excision, even as we try to shore up our military and political power.

It may be true that the conflict in Syria will come to an end, that ISIS will be utterly destroyed, and that the Syrian dictatorship will be undone. It may be true that tempered governance in the United States is not sacrificed on the altar of fear and hatred. May such be God’s will. But whatever happens, we can expect there to be more people seeking refuge from war. As climate change deepens, we can expect more wars over resources, more people fleeing areas that have become flooded, or turned into deserts, more refugees and more pressure on our social systems.

We need to recollect the experience of being refugees now so that we can respond to such needs. We need all the spiritual resources we can muster to do this, including especially the resources of Tisha B’Av, to stay open to the humanity of the refugee and the stranger, while also taking care of each other. That is why I will be fasting.