The Blogs
Daniella Levy
Apply for a Blog
Advertisement
Please note that the posts on The Blogs are contributed by third parties. The opinions, facts and any media content in them are presented solely by the authors, and neither The Times of Israel nor its partners assume any responsibility for them. Please contact us in case of abuse. In case of abuse,
Report this post. 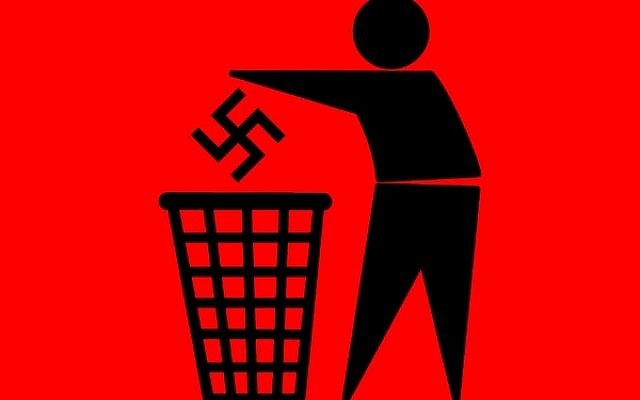 Anyone who has had the misfortune of discussing politics in an online setting has likely come across a phenomenon known as “Godwin’s law”: the idea that the longer an online discussion grows, the greater the probability that someone, at some point, will make a comparison involving Nazis or Hitler.

In the age of politics governed, to a large extent, by Twitter, Godwin’s law could probably be expanded to include any political discussion at all. “Nazi” has become synonymous with evil, and invoking Hitler’s rise to power has become the go-to rhetorical tool for labeling an opponent inherently sinister.

There are endless examples of this, but I was moved to write this piece now because of a cartoon that appeared in the major Spanish national newspaper El País last week.

The cartoon, drawn by Andrés Rábago García, a.k.a. El Roto, depicts a faceless figure wearing a yellow ribbon pinned to his left lapel, and an armband on his right arm with a yellow Star of David. The caption reads, “Whoever does not like the ribbon can opt for the star.”

Some context: the yellow ribbon stands at the center of a political controversy that has been raging since October of last year, when the region of Catalonia held an independence referendum and tried to secede from Spain. The ribbon is a symbol of support for political prisoners, and its use became widespread among pro-independence Catalans to express opposition to the imprisonment of the nine politicians and activists involved in the referendum. These prisoners have been detained for more than a year pending their trial, and several of them have been on a hunger strike for more than two weeks to protest the Spanish Constitutional Court’s blocking their cases from being taken to the European Court of Human Rights.

There has been a lot of bickering about the use of the yellow ribbon, and other symbols associated with the pro-independence movement, in public spaces in Catalonia. Unionists claim that seeing those symbols displayed publicly makes them feel alienated. One op-ed –also in El País — went so far as to claim that displaying yellow ribbons is a form of “moral violence.”

To me, at least, the statement the cartoonist is making is not very clear. Who is he suggesting opt for the star: people who want to wear a yellow ribbon but don’t like it for some reason, or people who don’t want to wear one because they don’t support what it symbolizes? Is he implying that pro-independence Catalans have a victim complex, or that unionists are being marked and targeted for not supporting independence? In light of his previous cartoons and the slant of the newspaper in which they are published, it appears that he meant the latter.

But the really important question is this: why on earth is this Spanish cartoonist invoking Holocaust imagery to make a statement about a political conflict that does not even slightly resemble the context in which yellow stars were used, and has nothing whatsoever to do with Jews? As pro-Israel Catalan journalist Pilar Rahola colorfully put it, “Is it necessary to use the tragedy of the Nazi Holocaust over and over again? Is there really no other sack full of s**t where one might search for misery?”

Why is it always Nazis?

Why is it never the Soviets, whose reign of terror may have resulted in even more deaths than the Holocaust?

Why is it never the Khmer Rouge regime of Cambodia, who exterminated all the intellectuals in their country along with minorities, targeting people for “crimes” such as speaking a foreign language or wearing glasses?

Why is it never the fascist Franco regime, or the Hutus in Rwanda, or the Cossacks, or if you want to get current, how about, I dunno, Assad? It’s not like human history lacks episodes of extreme evil and terrible suffering to draw from.

It doesn’t surprise anyone when people like Erdogan compare Israel to Nazi Germany, as he did yet again this past Friday; that kind of rhetoric is just poorly disguised anti-Semitism, and enemies of Israel use it all the time. But why are Spaniards comparing Catalans to Nazis? This is far from the first time this has happened, and it’s not just cartoonists, either. Last year, before the referendum, then-foreign minister of Spain, Alfonso Dastis, accused Catalan separatists of using “Nazi tactics.” This absurd piece, published in Es Diario this past May, goes point by point “proving” that pro-independence Catalan propaganda exactly follows the principles of Goebbels, citing such shocking tactics as “using symbols” and “branding state violence as political repression.”

Is it just a lack of imagination? Intellectual laziness? Or maybe it’s historical ignorance? After all, I myself know next to nothing about most of the regimes I mentioned above. We weren’t taught about them in school. And with a recent CNN poll showing that one in three Europeans knows little or nothing about the Holocaust, perhaps it’s not so surprising that a Spanish cartoonist would make such an outrageous comparison. What’s more, historians have drawn parallels between the antipathy expressed in Spanish society toward Catalans (“Catalanophobia”) and anti-Semitism; maybe the connection between Erdogan’s statement and El Roto’s is not that tenuous.

Inappropriate Nazi comparisons are not limited to the anti-Israel and the anti-Catalan, however; we find them made by everyone, everywhere, all along the political spectrum, from the most radical left-wingers to… well, actual neo-Nazis. When it comes to the liberal left, there might be another explanation for the lack of creativity: Marxism lies at the foundations of their political philosophy. Perhaps the atrocities committed by communist regimes are rather inconvenient for them to recall; crimes committed by Nazis and other fascists fit more comfortably into their worldview.

But I think it goes even deeper than this.

In the polarized political climate of our day, it seems that people are not satisfied with simply denouncing their opponents’ opinions, arguments, or actions. They feel a need to de-legitimize that person’s very essence: to prove that anything they have ever said or done, or will ever say or do, is inherently irredeemable because they, themselves, are irredeemable. Calling them a Nazi is a very easy way to do this. It “others” them. It demonizes and dehumanizes them.

There is another term that has been used in a similar fashion.

I recently took an online course created by Yad Vashem on the origins and current expressions of anti-Semitism. It was a fascinating, disturbing, and eye-opening experience, and I highly recommend it. One point the lecturers emphasized was that Jews were often seen as the “ultimate other.” Calling someone a “Jew” was once the worst possible insult; it was code for, “You are not one of us.”

Obviously, if you’re going to demonize somebody, it’s better to call them a Nazi than a Jew; I mean, the Nazis were actually evil, and they belonged to a political ideology, not an ethnicity or religion. All the same, I think it is no coincidence that the Jews’ oppressors, not anyone else’s, were the ones selected to brand the new “ultimate other.” Now that it is no longer socially acceptable to leverage Jewish “otherness” for rhetorical purposes, they leverage Jewish trauma instead.

My great-great-aunt and her family weren’t carted into a forest in Ukraine and shot in cold blood so you could make a pithy political statement.

I propose a golden rule. We can call it “Levy’s law” if you like. Goes like this: Do not call anyone a Nazi unless that person is 1) claiming to be one; or 2) literally tearing babies from their mothers’ arms and throwing them alive into pits full of burning bodies.

That is what Nazis were. And when you equate them to anything less, you are not only being lazy, ignorant, and unimaginative; you are whitewashing history, banalizing genocide, and insulting the memories of the victims.

About the Author
Daniella Levy is the author of Disengagement, By Light of Hidden Candles, and Letters to Josep. Her prose and poetry — in 3 languages — have been widely published, and she was nominated for the Pushcart Prize for her short fiction. She is also a copy and content writer. Born in the USA, she immigrated to Israel as a child, and currently lives at the edge of the Judean Desert with her husband and four kids. You can learn more about Daniella and her work at Daniella-Levy.com.
Related Topics
Related Posts
Comments