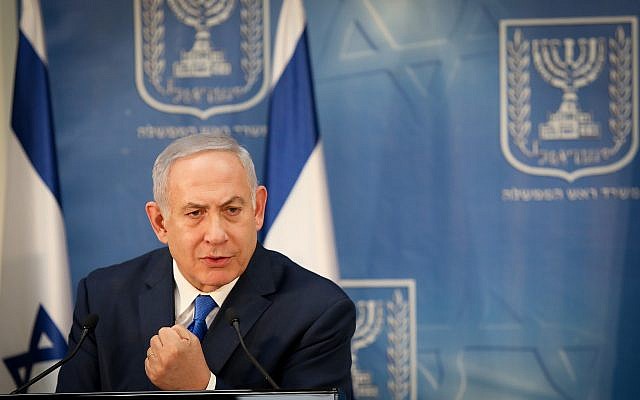 Whatever your party preference in the upcoming Israeli election, there is no denying that Bibi Netanyahu is one of the most experienced and formidable leaders on the world stage today. Elected three times and now approaching a record-breaking 10th year in office it’s hard to name a world leader that comes anywhere close in terms of eloquence, charisma, political savvy and the courage to speak truth to power. Against the advice of what Menachem Begin used to famously deride as ‘Jews with trembling knees’ Netanyahu went to Washington to oppose Obama’s capitulation to Iran and got no less than 26 standing ovations in the US Congress for his trouble.

Now, seriously – can you visualize Gantz doing that?

Benny Gantz deserves our respect and admiration as a fighter and leader of the IDF, but as a prime minister he is way out of his league. It’s not as if we’ve had much success with military brass in the prime minister’s chair. Yitzchak Rabin was totally out of his depth when dragged into the Oslo disaster by the politically savvy Peres, whom he famously called an ‘inveterate schemer’. Then there was Ehud Barak, who in a term of less than two years had offered 97 percent of the West Bank to a terrorist organisation and surrendered South Lebanon to Hezbollah. And it’s Ariel Sharon we have to thank for the fiasco in Gaza that torments Israelis until today.

How could such great generals fail in this way? Simply because the army is a hierarchical system which is totally antithetical to Knesset politics. Gantz was used to waking up in the morning knowing that he had a general staff, brigades and divisions at his beck and call. By contrast Bibi is used to waking up to find that his coalition partner has walked out and left his government hanging by a thread. Gantz is used to being saluted and obeyed by his staff who know their place, whilst Bibi has to deal with heavyweights like Avigdor Lieberman and artful dodgers like Arye Deri who will seize on any weakness to further their own agendas. Working 18-hour days on the knife-edge of coalition politics is what put the steel into the leader that now stands for his fourth term.

And it’s that same mettle that you see deployed against the corruption allegations brought against Netanyahu. Putting aside the pettiness of cigars, champagne and media favours, the most serious case being talked about is the submarine affair in which even the police and justice departments admit Bibi has absolutely nothing to answer for. But then we have seen so many of these political corruption cases make a big noise and then quietly fizzle out. Remember the 7-year persecution of Lieberman which came to nothing? Worst of all are the incessant police leaks which totally discredit the justice system.

And consider how soldier Sharon responded to his own scandals as compared to politician Bibi. The Cyril Kern Affair and the Greek Island Affair both rocked the Sharon family, but the left-wing media gave them a pass – saying that they had to “protect Sharon like an etrog” so long as he would make good on the Gaza disengagement and evict 8,000 Jews from their homes. For Bibi Netanyahu it would seem the Lahav 433 police unit is chickenfeed compared to the cut and thrust of coalition politics and he has been saying consistently: bring them on!

In spite of all this, many are saying: we’re tired of Bibi – it’s time for a change already! I would invite such people to look around the world and be careful what they wish for. Obama came offering ‘hope and change’ and what did he deliver? In France they wanted an anti-Sarkozy and first got a doddering Hollande and now a feckless Macron. In Canada they threw out the great Stephen Harper and got landed with Trudeau, an airhead with false eyebrows.

Israel is truly privileged to have one of the world’s most formidable and experienced leaders at its helm and there’s nothing that counts for more in this world than experience. His stature has grown in Africa, Asia, South America and now amongst Arab leaders. Look at the body language in meetings with Putin on really tough issues affecting their vital national interests. Moreover, Bibi has had to deal with three US presidents and, in the process, some very awkward Secretaries of State. He now has a unique relationship with President Trump, his first family and a dream team of Bolton, Pompeo, Greenblatt and Friedman. If there’s anything worthy of protecting like an etrog it’s exactly this status quo.

So – come April 9th – voters should be very wary of throwing out Bibi with the bathwater.

About the Author
Zalmi Unsdorfer is a Jewish Religious Zionist and Chairman of Likud-UK. He is a commentator on Israel as a writer, TV & panel commentator, and advocate. He supports Jewish resettlement in all of the Jewish homeland, Eretz Israel.
Related Topics
Related Posts
Comments