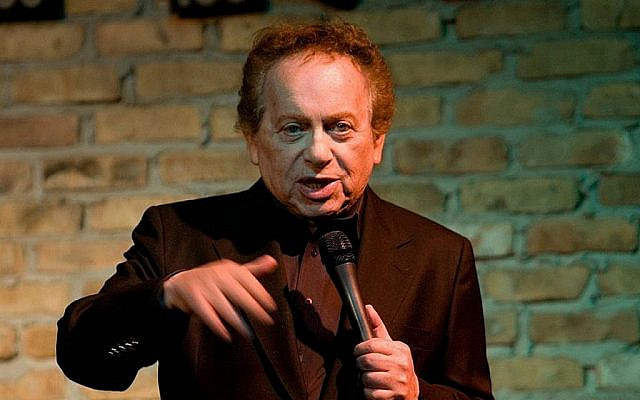 Comedian Jackie Mason isn't shy about sharing his political opinions. (Courtesy, via The Times of Israel)

About 15 years ago, I spotted legendary comedian Jackie Mason at the Manhattan Jewish Experience, on the Upper West Side. I didn’t invite him. He just showed up and walked about quite humbly. I got him a drink as we had our “Cocktails on The Roof” which we will actually be having again on Monday night, August 2 for the kickoff launch of my book “The 40 Day Challenge.”

I told Mr. Mason that I’d seen him perform at Grossinger’s when I was a kid as well as his hit show on Broadway. What I respected about him the most, I told him, was that he never changed. He knew who he was and the same jokes which made borscht belt Jews laugh were also found hilarious by non-Jews alike. Unabashedly proud of his Jewish identity, he wore his Judaism on his sleeve. Some of his jokes seemed to come right out of the Torah. When the Children of Israel complained to Moses saying ‘why did you bring us to the wilderness to kill us here, we could have died back in Egypt! – that had to be where Jackie Mason got his routine.

I was not surprised that Mr. Mason was able to perform even as an octogenarian. He didn’t seem to be a guy out for big money. He knew he had a gift and he liked to make people laugh. That’s just who he was. From the people I know who knew him personally, they said he was just a funny guy and as long as God gave him the strength to perform, he would never retire. Mason passed away last Shabbat at the age of 93.

Jackie Mason’s joked about the differences between Jews and gentiles went over so well. I remember hearing him in the Catskills making fun of all the Jews in the hotel going from breakfast to lunch to dinner and hitting the coffee shop in between. It was funny because it was so true! He joked about how Jews always manage to complain, especially in restaurants: “this table is too close to the kitchen, this table has too much of a draft”. “Gentiles”, he would say – “if they are seated at a table they don’t like, they don’t complain… they just sit there, as long as they have enough alcohol to drink!”.

I was watching clips of Mr. Mason with my 18 year-old son last night and we were laughing because his comedy is timeless. He was not afraid to be political and would make fun of whoever the president was, Republican or Democrat. When he made fun of former President Bill Clinton, he said “who ever heard of Arkansas? There are only two and a half people that live there!”. Just the same, he made fun of President George W. Bush.

Some people have athletic gifts, some are intellectual or academic. Jackie Mason’s gift was his impeccable timing with strong zingers that were side splittingly funny. While he always had great new material, he had an uncanny ability to tell a joke from 40 years ago, and even if you knew the punchline, the way he would deliver it guaranteed a laugh.

While Jackie Mason certainly influenced other Jewish comedians, like Elon Gold (who will be interviewing me Aug 2 at Manhattan Jewish Experience) and Modi Rosenfeld, he was a one-of-a-kind that wasn’t afraid of controversy. I don’t think the world will ever see a talent like him again. He had a fearlessness to say what people were afraid to say. To his credit, some years ago, when B.B Kings in Times Square was still open, he was still performing. He inspired many people with his timing and you knew he had humble beginnings. He was the real deal.

There is a beautiful passage from the Talmud that says that Elijah the prophet saw two men in the marketplace and someone told him they were guaranteed a place in the world to come. Elijah asked what the people did and the answer he received was that they were clowns who lifted people’s spirit with their comedy. Especially after Covid and anti-Semitism, we desperately need some humor in our times and here was someone unapologetically Jewish speaking many truths. He was also good litmus test. If you put a video of him on or played a clip, you would find grandparents, their children and their grandchildren all would have full belly laughs. Not many comedians can perform that trick. In terms of selling out Broadway, his shows of a one man performance, set the bar pretty high.

Perhaps it was the love of his work that kept him alive so long. How many people can truly say they love their job so much they would continue to do into their 90s? I loved when he would start singing cantorial style pieces during some of his acts. He was a legend, a part of my and so many other’s childhood. We wish blessings to his family and remain grateful for always making us laugh.