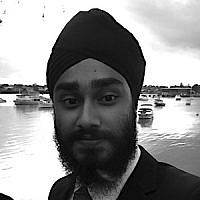 The Blogs
Jaspal Singh Sidhu
Apply for a Blog
Please note that the posts on The Blogs are contributed by third parties. The opinions, facts and any media content in them are presented solely by the authors, and neither The Times of Israel nor its partners assume any responsibility for them. Please contact us in case of abuse. In case of abuse,
Report this post.

I shall begin by saying that I probably fit the target profile of who you may consider to be a typical Labour voter. As a north Londoner, I was born and raised in a constituency which has been a Labour stronghold for decades. I’m a 3rd generation Sikh, and our household has maintained a very left leaning tradition ever since my late grandfather settled here in the 1960’s. I was educated in a working-class state school and now that I am at university, I am as appalled as any student would be at the inflated cost of tuition we are having to pay. As a social democrat, I am concerned about the deteriorating state of our NHS, and I have also grown weary of the years of austerity we have had to live with. Despite all of this, I have no intention of voting for the Labour party, a party which I once adored.

The main disagreement I have with Corbynites is the issue of international relations. This is a deal breaker for me. Since the invasion of Iraq in 2003, it appears that the left at large has developed a phobia of any interventionist foreign policy stance. Gone are the days of Labour’s ambitious Tony Blair doctrine, which was set out in Chicago in 1999. The Labour leader of the time encouraged the West to ‘spread the values of liberty’ where he drew attention to the war crimes of Saddam Hussein and Slobodan Milosevic. The Labour leader of today regularly attends rally’s organised by the hard left: ‘Stop the War Coalition’, which should more appropriately be called ‘Stop the West Coalition’, for its admiration of the vilest of dictators. As left wing journalist James Bloodworth states, “If the United States invaded hell, the Stop the War Coalition would soon be making favorable remarks about the Devil”. One can be critical of America’s hawkish abuse of power, but this should not warrant our support for brutal and autocratic governments, which just so happen to be anti-west. Jeremy Corbyn seems to take no issue with making appearances on the Iranian state funded Press TV or Vladimir Putin’s Russia Today. On every occasion, he has been invited, he has made no attempt to break their echo-chamber of conspiratorial propaganda, nor has he expressed his solidarity for the plight of the dissidents living under such autocracies.

It is understandable for the British public to be sceptical of our role on the world stage, especially after our disastrous campaigns in both Iraq and Afghanistan. But the narrative which has increasingly gained momentum amongst the left, is that we went to war for the pure sake of wanting to exploit the people of Iraq. Many also argue that we toppled a secular leader and in turn destabilised the region. If using chemical weapons on the Kurds, annexing a sovereign Kuwait, and harbouring notorious terrorists is a sign of stability, then that shows how low our expectations are of what can be tolerated in the Middle East. Saddam had also encouraged the spread of Salafi ideology in Iraq during the faith campaign of the early 90’s, which laid the groundwork for the jihadist insurgency of today, and thus it is absurd to call such a man ‘secular’. This isn’t justification for the war itself or the eight-year occupation which followed, but it is merely an attempt to contextualise Blair’s decision.

Let us not forget that it was the same Tony Blair who successfully led humanitarian efforts in both Sierra Leone and Kosovo. In the latter case, Blair bought an end to the ethnic cleansing of Bosnian Muslims by Serbian nationalists, a completely moral and just intervention (which Corbyn happened to be against). It is also difficult to say what would have happened to Iraq had we not intervened, but take the case of the neighbouring Syria as an example. Here we have another ‘secular’ despot, Bashar Al Assad, inflicting a genocide on his own people whilst he attempts to keep regain control of the Levant. On this occasion, our lack of intervention in not being able to stand up to a tyrant, has caused the biggest refugee crises since the Second World War, and has paved the way for more sectarian violence and bloodshed.

Corbyn has also colluded with both Islamists and anti-Semites in the past. On one occasion, he even referred to Hamas and Hezbollah as his friends. He seems to lack moral clarity, and is confused as to what is the root cause of Islamist terror. I was not surprised to find him affirming the link between jihadist violence and our own foreign policy in the immediate aftermath of the Manchester attack. It was disingenuous for him to say this, given that Islamists are opportunists who rely on a distorted narrative of half-truths. Their propaganda not only criticises our actions, but also our lack of action. Had we intervened against the brutal Assad, it would have branded by the Islamists as imperialism from the crusader west. Instead, our decision not to intervene, provided them with the opportunity to declare that the west does not care about the plight of Sunni’s in Syria.

Though it is fair to say that our interventions have exacerbated tensions throughout the Muslim world, and images like that of the torture at Abu Gharaib can of course be used as powerful recruitment tools, it is impossible to also deny that religious fervour and a draconian interpretation of religion are one of the root causes of jihadism. Many of the grievances they themselves cite are purely theological. To quote ISIS’ very own magazine, Dabiq, it writes “We hate you, first and foremost, because you are disbelievers…. The fact is, even if you were to stop bombing us, imprisoning us, torturing us, vilifying us, and usurping our lands, we would continue to hate you because our primary reason for hating you will not cease to exist until you embrace Islam.” What aspect of our foreign policy inspires an Islamist to throw acid on the faces of an unveiled Muslim women in Kabul? What aspect of US ‘imperialism’ motivates an ISIS imam to encourage the enslavement of Yezidi women in Iraq? Are the Taliban seeking revenge against us, by going in to a school in Peshawar and massacring their co-religionists who seek education? These are clerical fascists who want to resurrect a caliphate – they are the imperialists. Their existence pre-dates the Iraq war, the creation of the state of Israel, and even the founding of the United States of America. We should not compromise with these fanatics by allowing them to dictate our foreign policy. It is worrying that someone who wants to be a leader of the free world cannot seem to have a basic understanding of this.

But the bombers of Manhattan represent fascism with an Islamic face, and there’s no point in any euphemism about it. What they abominate about “the west”, to put it in a phrase, is not what western liberals don’t like and can’t defend about their own system, but what they do like about it and must defend: its emancipated women, its scientific inquiry, its separation of religion from the state. Loose talk about chickens coming home to roost is the moral equivalent of the hateful garbage emitted by [Jerry] Falwell and [Pat] Robertson. – Christopher Hitchens

One could argue that the Conservative Party, isn’t any more moral than Corbyn’s Labour for its stronger ties with the House of Saud. This article isn’t an endorsement of the Tory’s, but rather a rant at my frustration of what has become of a liberal and internationalist movement, dedicated to universal social justice. On a domestic level, the Conservatives seem to have at least tried confronting the ideology of Islamism, as was highlighted in a well-received speech made by David Cameron two years ago. Whilst I see Corbyn’s inner circle actively campaigning with the anti-Prevent lobby, I am pleased to see that the Conservatives are working alongside counter extremist groups like the Quilliam foundation, which predominantly consist of both liberal Muslims and ex Islamists like Maajid Nawaz.

Considering our departure from the European Union, as a country we face great challenges on the world stage. The Syrian civil war, Putin’s aggression in Eastern Europe, Donald Trump’s internal threat to the established free world order and the spread of radical Islam are some of the most important issues of our time. It’s more important now than ever before, that we elect a competent leader and not another populist demagogue.

About the Author
Jaspal Singh Sidhu is an Aeronautical Engineering student at Loughborough University in the United Kingdom. He is a British born Sikh, and takes a strong interest in politics, history and international relations.
Related Topics
Related Posts
Comments