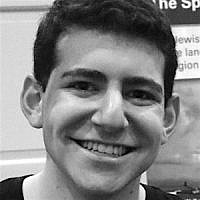 The Blogs
Nathan Schachter
Apply for a Blog
Advertisement
Please note that the posts on The Blogs are contributed by third parties. The opinions, facts and any media content in them are presented solely by the authors, and neither The Times of Israel nor its partners assume any responsibility for them. Please contact us in case of abuse. In case of abuse,
Report this post.

I recently made the decision to pursue a career in Jewish non-profit. While many would not be surprised by this decision, it took me a long time to figure out why it was so important to me. From going through day school, volunteering and serving on the Board of Directors at my local JCC, and now being a student leader at the University of Connecticut Hillel, being involved in my Jewish community was instilled within me. But why does it matter to me? And why should it matter to you?

Chanukah is right around the corner, and with all the latkes, candles, and dreidels comes a chance to learn from the story which I’m sure we could all recite by heart, word-for-word. The Greeks ruled over the land of Israel during the times of the Second Temple. They banned Jews from observing their religion, and forced others to perform Hellenistic rituals. Matityahu, an old priest from Modi’in, fled with his sons and called for all loyal and courageous Jews to follow him in fighting against the Greeks. They followed leader Judah Maccabee, and even though they were much smaller in number, succeeded in defeating the Greeks. However, when they returned to the Temple to light the menorah, there was only enough oil for one night. Yet the menorah stayed lit for eight nights! To this day, we join our families every night for eight nights to light the Chanukiah and commemorate miracle of the oil.

However, what we don’t tend to focus on is the message from that of the Maccabees. Matityahu and Judah act as leaders in bringing the Jewish people together. Like many other holidays, Chanukah recognizes the potential we have as a people when we come together for a just cause. This communal approach, and in addition to its product of communal responsibility, has deep roots in Jewish tradition.

I recently read an article by Rabbi Jill Jacobs entitled “Community Focused,” in which she writes that it is no coincidence that the Jewish people call themselves “Am Yisrael” (the people of Israel), rather than “Dat Yisrael” (the religion of Israel). A sense of peoplehood has long been the defining characteristic of the Jews. In Sanhedrin 17b, the Talmud offers a working definition of the concept of community in Jewish life: “A talmid chacham (Torah scholar) is not allowed to live in a city that does not have these 10 things: a beit din (law court) that  issues our punishments; a tzedakah fund that is collected by two people and distributed by three; a beit knesset (synagogue); a bath house; a bathroom; a doctor; a craftsperson; a blood-letter; (a butcher); and a teacher of children.” In contemporary times, Jewish communities have been centered around many other types of institutions, including JCCs, day schools, camps, local Federations, etc. In all of these cases, a building or organization serves as the center for a community to take care of each other’s needs. Jewish text even treats participation in communal affairs not as an option, but as an obligation, as is shown in one Midrash that compares removing oneself from the community to destroying the world (Midrash Tanchuma, Parshat Mishpatim 2). Though the precise structure of Jewish communities has changed according to place, time and current interests, membership in a Jewish community has always demanded a sense of share destiny, manifested in the obligation to care for other members of the community, as well as in the joy of partaking in others’ celebrations.

No matter where we are in the world, we are all Jews. As we all come together from such diverse religious and geographical backgrounds, we can still create community through the simplicity of being Jewish. Each individual must feel like a part of the bigger picture, like that of a family model. But just like with any family, we each have responsibilities. We must each take it upon ourselves to take action and become involved in our communities. Figures show that in the next few years, many Jewish communal professionals will be retiring and we need a new future. We all have an ability to strengthen and unite our community, creating the right Jewish environment of which you want to be a part of. Quite often, giving can bring a person as much nachas as receiving. Spread the simcha, do your part to help those in need, and bring all of the Jewish people closer together, just as a community organization has done for your community.

About the Author
Nathan is a student at the University of Connecticut. Seen through his work as a student leader at Hillel and other organizations in the Greater Hartford area, Nathan has a passion for making a difference. He hopes to eventually make aliyah to Israel.
Related Topics
Related Posts
Comments