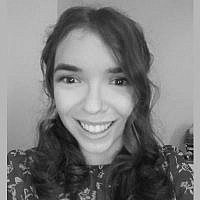 The Blogs
Sarah Salles
Apply for a Blog
Please note that the posts on The Blogs are contributed by third parties. The opinions, facts and any media content in them are presented solely by the authors, and neither The Times of Israel nor its partners assume any responsibility for them. Please contact us in case of abuse. In case of abuse,
Report this post.

When I was young I wanted what every kid wanted…to fit in. I didn’t want to be “the weird one” since I felt like I stuck out for the wrong reasons. As I got older and found my place in Judaism (that’s a story for another time) I realized fitting in was overrated and a false reality. How did it start? Not in the way most people would expect. When I was ten Tron legacy came out.

I get it, Tron and Judaism could there be two different things? Not exactly? In short, during Tron Legacy, Flynn wanted the perfect system yet learned that perfection is impossible. That message has stuck with me almost 10 years later and perhaps why I like the movie so much. But we aren’t here to talk about the movie.

More recently I’ve begun to learn more about my faith.  One of my favorite things I have learned is a human is born because the world cannot live another day without that specific person. We somehow have a purpose, a reason why we are here. We aren’t here to be like anyone else because religion aside that would be boring.

This is hard to grasp especially during our teenage years when we just want to be accepted. People are telling us to be who we truly are, yet when we embrace our true selves we are criticized and made fun of. It can be difficult for someone to understand.

In recent years, it has become common for people to embrace who they really are. Being that most of us have a lot of time on our hands, take a few minutes every day to understand yourself. Learn to love your imperfections, after all, it makes you who you are.

About the Author
Sarah Salles is a college student in the process of getting a degree in Nursing. She is originally from South Florida and has lived in New York briefly. She is passionate about Judaism and helping others. She can be found on Instagram @SarahrSalles
Related Topics
Related Posts
Comments