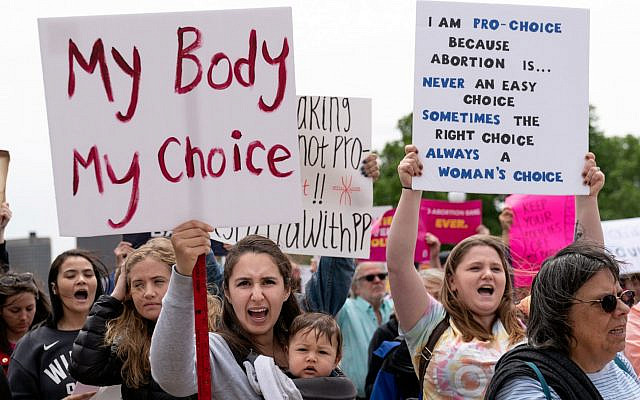 While the US Supreme Court was overturning Roe v Wade, Israel was going in the opposite direction, making access to abortion easier. In fact, the US is alone among liberal democracies. With the overturning of  Roe v Wade, parts of the US are now or are about to become even more restrictive that most of the ultra-conservative and ultra-patriarchal countries, including Pakistan (listed as one of the 10 worst countries for women) where abortion is allowed for health or socioeconomic reasons. The consensus in practically all liberal democracies today is that when it comes to abortion, it is “her body, her choice”.

But does the pro-choice stand mean that we give up the right to have any further thoughts or opinions on abortion? Are we saying that since it is the pregnant woman’s decision, we wash our hands of the whole matter? Not at all.

Being pro-choice simply means that when a woman is pregnant, since it is her body and no one else’s body that is carrying the fetus, she and only she makes the ultimate decision on whether to carry the pregnancy to term. Being pro-choice does not mean being in favor of abortion. Whichever way you look at it, an abortion ends a life or at least a potential life. For this reason, a society must do its best to reduce the rate of abortions.

The most effective way to do so is to avoid unwanted pregnancies. Sex education and better birth control have been shown to significantly reduce the rate of unwanted pregnancies and therefore the rate of abortions. Thanks to these measures, according to USA Today, the “national abortion rate declined 26% between 2006 and 2015, reaching a historic low”.

Failing that, the alternative is to attempt to change an unwanted pregnancy into a wanted pregnancy. Societies that truly care about reducing the rate of abortions provide services to support pregnant women and young families living in poverty, and they enforce child support by fathers. Studies show that if a woman believes that she will have the support needed to raise her child, she is less likely to choose to have an abortion.

Banning abortions is therefore an ineffective and highly invasive government interference into an individual’s most intimate space. It appears that for those who support a ban on abortions, the wish to control women is stronger than any other political objective, including the wish to keep the government off our backs, and paradoxically including the goal of reducing the rate of abortions.

Contrary to what its name may imply, the abortion issue is not a conflict between people who support abortion and people who don’t. No reasonable person of any political persuasion wishes to see a high rate of abortions. It is certainly not the first choice of a woman who finds herself pregnant against her wishes. If she could reverse time, she would choose to not be pregnant in the first place. But while we cannot reverse time, we can help prevent future unwanted pregnancies and we can reduce the future rate of abortions.

The abortion issue is in fact a conflict between two groups neither of which supports abortions: one group that chooses to engage in virtue signaling by making a big show of imposing the government’s will on women, hence robbing women of a most fundamental human right, the right to control their own bodies, while not reducing the rate of abortions; and a second group that chooses to effectively address the root causes of abortion through knowledge and a supportive community.

In other words, so-called pro-life proponents want to control women while pro-choice proponents want to help women. This isn’t much of a contest, which explains why rational and enlightened democratic societies, including Israel, Canada, Australia, New Zealand, Iceland, South Korea, and practically all of Europe, belong in the second group.