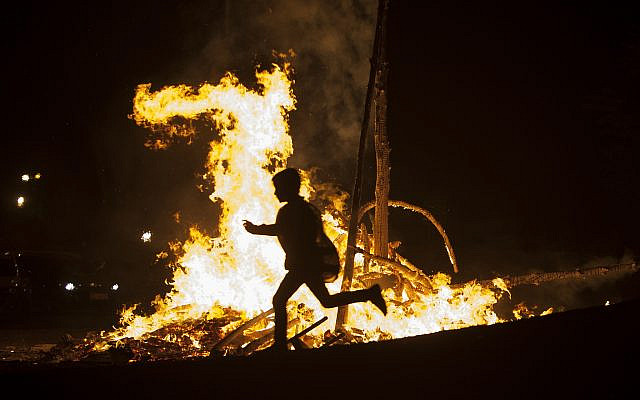 Each year Lag B’Omer offers an extreme example of the unintended interface between religious festivals and environmental damage. There are many ecological ramifications associated with the world’s celebrations: an American Thanksgiving dinner on average produces 20 kilograms of CO2 emissions; the fireworks that accompany Bastille Day or the Fourth of July typically increase particulate pollution by 42%. The annual harvesting of 120 million Christmas trees has a three-million-ton carbon footprint. Lag B’Omer constitutes Israel’s idiosyncratic contribution to this largely unexplored class of environmental impacts.

The establishment of our Jewish state brought with it the renewal of many holidays that had been forgotten or marginalized during the years of exile. For the secular Zionist pioneers of the early 20th century, bringing festivals back to life was a happy manifestation of national renewal, validating the reemergence of the Jewish nation as indigenous people in their own land. Holidays, such as Passover and Sukkot (Tabernacles), which had primarily sported a religious character in Diaspora, now became agrarian and ecological celebrations. Long-forgotten festivals with links to the land of Israel and its history were revived. Lag B’Omer, (literally the 33rd day of the Omer) is one of the more prominent examples.

The origins of Lag B’Omer are somewhat arcane. Technically, the holiday is part of the forty-nine-day annual period when Israelites “count the Omer,” a ritual mandated in the book of Leviticus. This is generally a mournful period in the Jewish calendar when men don’t shave and weddings are postponed. But the 33rd day of this period is anomalous: a day of wild celebration when the public stays out late into the night enjoying a shared agenda of merrymaking and bonfires.

Many reasons have been given for the “one-off” day of celebration. When the inimitable Rabbi Akiva dominated the local scene 2,000 years ago, there was a plague that killed thousands of his students during the counting of the Omer. (The cause was diagnosed as punishment for the poor interpersonal relations so pervasive at the time.) But on the 33rd day of the counting of the Omer, the plague among Akiva’s students miraculously abated. Another tradition attributes the holiday to the ill-fated Bar Kochba revolt against the Romans when rare victories would be communicated via giant torches on the hillsides across the land of Israel.

This offers the best explanation I can find for the ubiquitous bonfires. Lag B’Omer is the one day of the year when pyromania is not considered to be a psychological disorder. Jews of all ages and religious persuasions convene outdoors to fan the flames, cook the potatoes and sing campfire songs through the night. A mass pilgrimage of the Orthodox faithful to Shimon bar Yochai’s gravesite in Meron commemorates the day of his death, with massive fires presumably reflecting the great mystique’s abiding spiritual light.

Unfortunately, as Israel became densely populated, the proliferation of Lag B’Omer’s ritual infernos emerged as a health hazard. By 2008, Israel’s Ministry of Environmental Protection began to warn about elevated levels of air contamination. Air quality monitoring had become more precise and concern grew over the magnitude of the health impact: the bonfires were already producing twice the allowable levels of air pollution, exacerbating local incidence of respiratory illnesses, particularly asthma.

A decade later, air pollution concentrations on the evening of Lag B’Omer were an outright environmental disaster – with regular reports of a 1,800 percent increase above permissible fine particle concentrations! Lag B’Omer is the day when Israel’s emergency rooms are filled beyond capacity with emergencies (burns; asthma attacks; respiratory difficulties; vomiting; etc.). Sensitive populations, such as the elderly and asthmatics are especially affected.

Every year, Israel’s environmental and health ministries and NGOs make token efforts to issue warnings to sensitive populations and propose special alternative events. This year is no exception. In 2020 Covid limitations provided some respite and dramatic air pollution reductions were measured in the country’s 150 monitoring stations. This year, however, will be different.

There are the usual half-hearted, official calls for “alternative forms of celebration,” but ultimately, the best the government can do is post a notice on the relevant websites encouraging the merging of dispersed conflagrations into consolidated neighborhood fires; avoidance of disposable, plastic plates (and their incineration in the flames) while begging the public to make sure that bonfires are fully extinguished before heading home.

Last year I published research with my colleague, Dr. Dorit Kerret from Tel Aviv University, about alternative celebration options. Dorit had piloted several when she ran a competition in her daughter’s school, challenging the children to propose “environmentally friendly,” fire-free activities. The winning class suggested using kites (another ancient means of communication) at archaeological sites from the Roman period, rather than the traditional class campfire. Empirically, the children found the experience far more meaningful than past gatherings.

Slowly but surely, local creativity is starting to create more sustainable alternatives. The Tel Aviv municipality put out a list of recommended events for tonight’s Lag B’Omer celebrations for children young and old. The suggestions include stargazing; creating drum circles under street lights; treasure hunts illuminated by personal lanterns; and home-cooked baked potatoes at outdoor picnics (warmed in special candle-heated boxes). And then there are always the default bow and arrow opportunities.

After moving to Israel, I always appreciated living with a calendar that ensured that even as I grew older, once a year I would enjoy the hypnosis that humans over the ages experienced when staring into the mystery of an all-consuming flame. I still believe that encouraging children to feel comfortable under the stars, building campfires has myriad benefits in building an adventurous younger generation that enjoys the outdoors. But as the years went by, I noticed that at school events, it was mostly the parents who were playing with fire. The essence of the holiday was lost as fathers tried to “out burn” the rival classrooms by bringing ever more insane quantities of wood to toss onto the blaze.

As the planet pushes back against our insatiable human appetite for “more,” many pleasures, large and small are going to have to be modified: eating copious quantities of steak, joy-rides, the convenience of plastic plates. The catalog of small and large environmentally destructive activities is forever growing.

Environmentalists should have learned long ago that simply being the bearer of bad news and delivering a new list of: “Thou Shalt Nots” – is a pretty poor strategy. Our challenge is to find substitutes that are compelling, inspirational and fun.

So chag sameach to one and all. Go out and fly your kite, beat your drum, or even sing around a modest campfire. If ever there was a year when we should all be inspired to celebrate the end of an ancient epidemic – this is it! Yet, in a country as creative as Israel, surely we can find new, sustainable ways to do so.

About the Author
Alon Tal is a professor at the Tel Aviv University Department of Public Policy, a veteran environmental activist and a candidate in the Blue and White party.
Related Topics
Related Posts
Comments