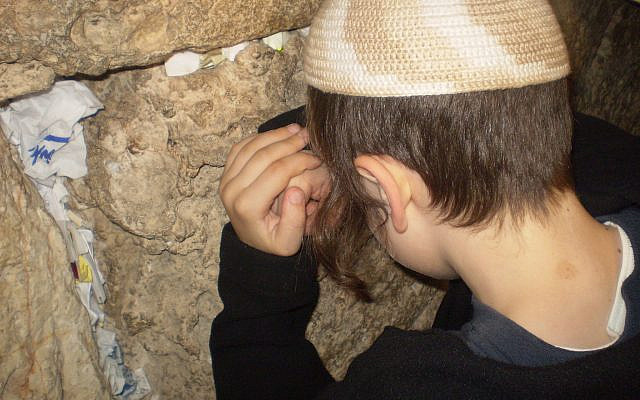 My son, Amichai, Tisha B'Av evening at the Kotel.

On Tisha B’Av, we mourn over the destruction of the Beit HaMikdash, the Holy Temple, over the destruction of Jerusalem, and over being exiled from our Land. Unfortunately, because of the great length and darkness of the exile, there is a totally mistaken and distorted understanding of what exile is. Instead of experiencing it as a terrible punishment and curse, it is all too often experienced as the ideal place to live. Brooklyn and Boca and Melbourne and Toronto are considered permanent dwelling places instead of the Land of Israel.

In a weekly Torah lecture, Rabbi Shmuel Eliahu, Chief Rabbi of Tzfat, and son of the former Chief Rabbi of Israel, Rabbi Mordechai Eliahu, of blessed memory, related that he was once in the Diaspora with his father. “One of the Jews in the synagogue approached me and said that he would consider moving to Israel, but that it was too dangerous. When he said it, I felt like tearing my shirt in mourning. I felt like throwing myself down on the floor and begging G-d to forgive us for our sins. In the darkness of exile, people don’t see that assimilation is eating us up alive, and that in a generation or two, all will be finished, no longer will their children be Jews! As for the Orthodox, who will save them when the Gentiles turn their wrath against them again? As our prophets declared, ‘Only in Zion will there be a refuge.’”

My beloved brothers and sisters in exile, don’t let the past three or four decades of calm deceive you. Don’t think that punishment of exile is a thing of the past. The exile continues today. And the exile is a terrible curse. Even in Brooklyn and Beverly Hills. Make no mistake about it. The exile is the worst punishment that there is for a Jew.

If a father has to throw a child out of the house, it pains the father as well as the son. The Talmud teaches that Hashem cries over His children in galut. Three times a day, He cries out, “Woe to the Father who has cast His children into the lands of the heathens… and woe to the children who have been banished from their Father’s table,” (Berachot 3A).

THE EXILE IS A CHILLUL HASHEM

When the gentiles see the Jews living in their countries, they say, “These are the children of G-d who have been cast out of His Land. G-d doesn’t have the power to guard over them in their Land. We succeeded to uproot them, and their G-d was powerless to help them,” (See Ezekiel, 36:20-24). The presence of Jews in Gentile lands in a desecration of God’s Name.

JEWS ARE HELPLESS IN THE EXILE

When a child is thrown out of the house, he doesn’t have anyone to protect him. Throughout the exile, we were persecuted and slaughtered. Over the centuries, millions and millions of Jews were mercilessly killed. Wherever we wandered, sooner or later, the non-Jews turned their wrath against us.

THE EXILE ALIENATES JEWS FROM HASHEM

When a child is thrown out of his house, he is cast away from his father. The exile distances us from G-d, as King David said when he was forced to leave the Land, “For they have driven me out this day from being joined to the inheritance of the Lord, saying, Go and serve other gods,” (Shmuel 1:26:19). The Gemara in Ketubot explains that living outside the Land of Israel is like serving other gods, because the exiled Jew is cast out of his Father’s house. The service of Hashem in the Diaspora is severely impaired. The influence of our prayers and Torah learning are gravely weakened by the impure spiritual atmosphere found amonst the nations. Rabbi Elazar said, “From the day the Beit HaMikdash was destroyed, and iron wall was drawn between Israel and their Father in Heaven,” (Berachot 32B).

THE EXILE GIVES STRENGTH TO THE GENTILES

The Ramban explains that when Jews are in exile, their prayers and Torah learning goes up to the celestial angels that Hashem has placed over the nations, giving them strength to rule over Israel (Ramban on the Torah, Achre Mot, 18:25).

THE EXILE SHRINKS THE TORAH

Without the Land of Israel, Jewish Statehood, the Temple, and Sanhedrin, Jews outside the Land have only “four cubits of Halachah,” the individual laws governing the private mitzvot like tefillin, kashrut, and Shabbat. The rest of the Torah, over two-thirds of the Mishna, cannot be practiced. Thus the Gemara states, “There is no greater bitul Torah (neglect of Torah) than the exile.” Why? The prophet answers, “For the herd of the Lord has gone into captivity,” (Yirmeahu 13).

IN THE EXILE THERE IS NO PROPHECY

In foreign lands, Israel has no prophecy, its most unique connection to G-d. As it says, “Her king and her princes are among the nations; there is no Torah; her prophets also find no vision from the Lord,” (Lamentations, 2:9).

EXILE CUTS OFF OUR PRAYERS

Jerusalem is the gateway to Heaven, the place where all prayers ascend. In the exile, the gates of prayer are closed, as its says, “Even when I cry and call for help, He stops up my prayer,” (Lamentations, 3:9). Only the gate of tears remains open.

Malchut Hashem, the Kingdom of God, in the world is manifested by the Kingdom of Israel in Eretz Yisrael. When Jewish sovereignty is lost over Israel, the Jews are not merely scattered amongst the nations, the Kingship of God is destroyed and the Shechinah goes into exile as well. Foreign powers seem to rule in God’s place, and the Jews become servants to foreign regimes, as if God lacks the power to rule over His people alone.

IN EXILE, JUSTICE AND PEACE ARE LOST

From Jerusalem, the world is to learn the true path of justice. In the future, all of the nations will come to Jerusalem to learn from Sages of Israel how to truly base justice in their countries and how to serve God in world peace. In the exile, God’s justice in the world is lost and nations do as they please.

IN EXILE, BLESSING IS LOST

The Talmud teaches that when Israel dwells in its Land and obeys the will of Hashem, rain comes in fullness and the world is filled with blessing (Baba Batra 25B). Only when all of Israel is gathered in our own Land can we be freed from the humiliation of foreign dependency. Only when Israel has returned to its Land will blessing return to the world.

IN EXILE, THERE IS NO JOY

The Psalmist laments, “How can I sing the Lord’s song in a foreign land?” (Tehillim 137). Only when we return to Zion can our hearts be filled with joy, as it says, “Then our mouth was filled with laughter and our tongue with ringing song,” (Tehillim 126).

IN EXILE THE SHECHINAH IS IN TORMENT

One Shavuot night in the exile, the Shechinah spoke to Rabbi Yosef Karo, author of the “Shulchan Aruch,” saying: “If you only knew of only one one-hundred thousandth of the pain that I must suffer here, you would never have any joy in your heart, when you recall that because of you I have been cast into the dust.” Then the Shechinah told Rabbi Yosef Caro that if he wanted to cleave to Hashem, he and his students should go on aliyah to the Land of Israel.

My friends, how sincere can our mourning be when we spend the week after Tisha B’Av playing golf and tennis in the Catskills and heading up north to spend Shabbos Nachamu on the shores of Lake George instead of the Kinneret?

May the day soon come when our mourning over the exile will lead us to leave it, like a bad dream, behind us. Then Tisha B’Av will be transformed into a day of joy, as our Sages taught – all who mourn over the destruction of Jerusalem will merit to see her joyous rebuilding. Amen.