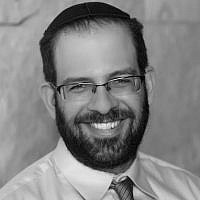 The Blogs
Neil F. Blumofe
Apply for a Blog
Please note that the posts on The Blogs are contributed by third parties. The opinions, facts and any media content in them are presented solely by the authors, and neither The Times of Israel nor its partners assume any responsibility for them. Please contact us in case of abuse. In case of abuse,
Report this post.

The following message was sent to members of Congregation Agudas Achim in Austin, Texas following criticism over a draft itinerary for a planned Israel trip that included a stop at the grave of Yasser Arafat.

In these past few weeks, I have cherished communicating with hundreds of people in our beloved community about the proposed itinerary that was to comprise our synagogue community trip to Israel in June, 2017. ​I am deeply moved by the profound connections and the incredible support that has personally been voiced. Even with the few with whom I have spoken who have shared honest critique, I have appreciated the respect, civility, and the dignity with which disagreement has been offered, in the spirit of generosity and dan l’kaf zechut – giving one the benefit of the doubt. In these weeks, as the High Holy days approach and our schedules get more full, I realize that those who seek to do so may not have the time or opportunity to meet with me sooner rather than later. Therefore, I take this opportunity to state my position and rationale regarding my decision to lead a CAA community trip this summer to explore Israel and her security within her larger region.

In the past several years, our community has traveled to Israel every other year. We have had different themes each time — 2013 was an investigation of the Holy Cities (Safed, Hebron, Jerusalem); 2015 included a tour of Israel’s borders — including an important visit touring the work Jewish National Fund (JNF) has done in S’derot, which is an Israeli city next to Gaza. This year our group will explore Israel in the context of the larger region. In 2019, we are looking to schedule a family trip with plenty of flexible opportunity to joyfully ​experience the recreational places within Israel.

Shakla vetarya (give and take) is a venerable method of rabbinic learning and investigation, and something I apply to all inquiry. To me, this is the baseline of being Jewish — and comprises the core of my living in sacred connection to our traditions. With this trip scheduled for 2017, I hoped​ to have meaningful dialogue with well-meaning participants about the aspects of the itinerary that challenged them and that made people uncomfortable. That was the point. The entire itinerary was a thought experiment. I looked to empower people to join with me to decide which experiences they would have, as we partnered in creating the itinerary together – and with the collective effort, a goal was to show the dangers that Israel and her people constantly face, every day. ​

In addition to a potential stop at the tomb of the terrorist Yasser Arafat (ym”sh) that has been criticized, other elements of this draft itinerary included: experiencing the Tel Aviv Gay Pride Parade, sharing time with residents in an overnight stay in the disputed territory of Har Bracha in Samaria (West Bank), visiting with Jewish, and non-Jewish residents of Hebron, and visiting Isha l’Isha, the Haifa Feminist Center, the oldest grassroots, feminist organization in Israel, and one of the leading voices of women’s rights in the country. Now, in partnership with synagogue leadership and other community members, we are revising the entire itinerary as we anticipate our summer, 2017 journey to Israel – I hope that you will consider joining me on this, or future trips.

I categorically reject and condemn Yasser Arafat and his insidious legacy (ym”sh) — a Hebrew abbreviation that stands for yimach sh’mo vazikro, which means — “may his name be blotted out.” To suggest or insinuate otherwise is immoral and defamatory​.

In our tradition, we have intractable enemies. While we blot out Haman’s name on Purim, we do so as we paradoxically articulate it. We must find allies and must not retreat into absolute positions. To be present somewhere is not to pay homage — rather it is to say we are still here, reclaiming the memories of those who Arafat and his followers murdered, and educating others about the continuing dangers of his legacy. This tomb is a propaganda tool that is used to shore up mindless support for our dehumanization. In turn, not to discuss this stymies dialogue, which leads to our peril. Let us not fall into this trap. To think otherwise empowers our real enemies and continues to drive us apart, intensifying our systemic, historical traumas.

While I appreciate the work of many Jewish organizations across the political spectrum who strive for ahavat Yisrael (love of Israel), the following are organizations of which I am actually a member, or which I support: Jewish National Fund (JNF) — Rabbis for Israel, AIPAC, Shalom Hartman Institute, where I am a Senior Fellow, Rabbis without Borders, Institute for Jewish Spirituality — Hevraya, Interfaith Action of Central Texas (IACT), where I serve as president, Texas Freedom Network — Executive Board, Rabbinical Assembly, and the Cantors Assembly.

Day after day, I speak to people who are concerned about the slackening of support, and the growing difficulty of advocacy for Israel in our charged, polarized political climate. We see the dangerous way that the repugnant BDS movement (Boycott, Divest, and Sanction) movement has made incursions on our college campuses and I applaud and support those on these front lines, directly beating back these efforts that seek to delegitimize Israel and dehumanize our Israeli brothers and sisters.

I believe that we must do something too. We must learn the language of those with whom we disagree — especially those with whom we most profoundly disagree. We must see the narratives, symbols, and myths — and question them. We must develop a more sophisticated, critical understanding of the world around us, as opposed to reducing our justified fears to an “us versus them” mentality. We must learn to think for ourselves and not accept whatever we may read that encourages embitterment and distance. We must learn to have more informed, examined opinions and hear competing voices so we may be more fully confident and present in our own story.

I am sorry that a proposed stop in an internal draft document has caused such furor. While it was a point of conversation within a larger itinerary, I certainly do not seek public controversy and upon reflection, I see it as a misstep in what I was seeking to accomplish.

In all that I do, I seek to be a convener of positive leadership. I seek to inspire each of us (and especially our youth) not to be afraid to ask difficult questions so we may outwit those who seek to divide and use negative tactics to gain power. We need each other — each of us resolute in our quest to support a strong and secure Jewish and democratic state.

Next week, at the Bullock Texas State History Museum, an exhibit will open that was developed by the US Holocaust Memorial Museum, entitled — State of Deception: The Power of Nazi Propaganda. We must look into the heart of the beast to see it for what it is, to demystify it, and ultimately to change it. As part of this opening, I am honored to offer an opening prayer at a special dinner for donors and supporters.

As always, I encourage each of you to be in touch directly with me to engage considerately. I look forward to our learning together — engaging in our sacred texts as we look for direction and meaning in this world. I look forward too, to yet responding to the very many who have already expressed their trust and support. As we experience these days of Elul — a time of reflection and change, I am grateful to my dear, chosen community and appreciate the depth of your support and confidence. I wish each of us and our loved ones the blessings of good health as we see each other and as we support each other in the New Year, and beyond.