The Blogs
Yaakov Cohen
A Passionate Zionist!
Apply for a Blog
Please note that the posts on The Blogs are contributed by third parties. The opinions, facts and any media content in them are presented solely by the authors, and neither The Times of Israel nor its partners assume any responsibility for them. Please contact us in case of abuse. In case of abuse,
Report this post. 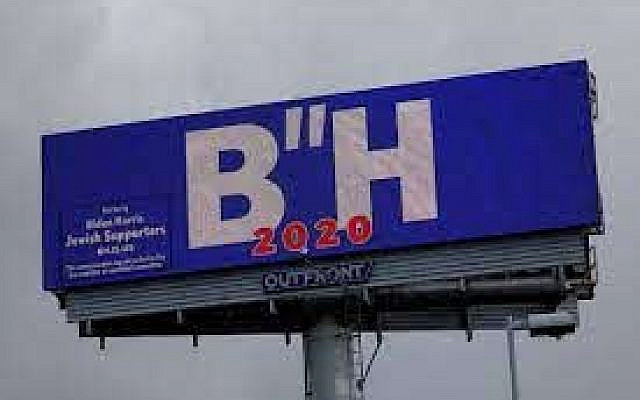 It is no secret that the American president, Donald Trump is super popular among Israelis. Theoretically, he is the friendliest and most supportive U.S. president to Israel – as a result of his efforts, the U.S. embassy moved from Tel-Aviv to Jerusalem, the U.S. recognized Israeli sovereignty over the Golan Heights, the U.S. withdrew from the Joint Comprehensive Plan of Action, known as the Iran Nuclear Deal, the U.S. stopped the financial support of the Palestinian Authority and UNWRA, and President Trump was the accelerator of the Normalization Accords signed between the UEA, Bahrain & Israel (The Abraham Accords).

At the same time, anti-Israel voices have grown stronger. The Israeli administration and the Democratic party started clashing throughout the Obama administration. Today the leading voices against Israel are Congress members Ilhan Omar (MN) and Rashida Talab (MI) who gain much of their support from the widening Progressive margins within the Democratic Party.

So, why not support President Trump?!

The famous sentence says you need two to Tango. The growing anti-Israel voice in the Democratic party has two main gripes – Israel’s PM Benjamin Netanyahu and the US President Donald Trump.

PM Netanyahu, during the years of the Obama administration, has clashed directly and publicly with the President. The US President has made some crucial mistakes in his Foreign Affairs policies in the middle east, but it seems that Netanyahu was the first Israeli PM to confront publicly and more than that to collaborate with the Republicans within the Congress and the US Senate. Prime Minister Netanyahu erred by officially supporting the Republican Mitt Romney in the 2012 Presidential Campaign and when he addressed the House of Representatives in March 2015 against President Obama’s wishes.

President Trump, like PM Netanyahu, is a skilled salesman who built his power through polarizing American society into “Us” and “Them”. Trump has no problem clashing with his opponents, “trash talking” and spilling oil on the campfire in order to get favorable ratings. I will say that President Trump is not the source of America’s problem, but he is definitely an accelerator of the social unrest, ignoring white supremacy and other racist elements who are raising their heads and acting on behalf of what they see as America.

Trump, just like Netanyahu in Israel, strengthens the Nationalist movement while working against and weakening its members. With his tax reform that helped the rich (the numbers show that the 50 wealthiest Americans are now worth as much as the poorest 165 million Americans, growing their worth in the amount of approximately $10.2 billion in the pandemic era). President Trump who from day 1 spoke loudly against the Affordable Care Act, hopes to ban it, leaving almost 30 million Americans uninsured. Obamacare has many flaws but provides some coverage to people who had no insurance prior.

Even with Foreign Policy, there are huge gaps between what is said and what actually takes place.

Russian-Iranian coordination is closer than ever. They have gained an outpost in the Mediterranean and are working closely to strengthen their hold in Iraq, which will give them a consecutive land hold from the Persian Gulf to the Mediterranean. While the US withdrew from Syria, Russia is growing its influence in the Middle East, arming Iran, Syria, and Hizballah, and endangering Israel.

As Russia becomes more involved in a local conflict, the U.S. remains silent. Russia is working aggressively and efficiently to promote anarchy and to weaken democracies (Including the U.S.) by spreading what can be gained in the name of fake news.

While Russian President, Vladimir Putin is arm-wrestling with Europe, President Trump promotes a policy of defunding the North Atlantic Treaty Organization (NATO), thereby forcing US allies to search for new allies. NATO was founded after WW2, to promote democratic values and to keep the peace through a net of collective defense clause. Its members are working together to balance undemocratic elements like Putin’s Russia. When President Trump weakens NATO, he is empowering undemocratic elements like Putin and world instability. We can say that in many ways – Trump made Russia great again, as his separatism policy, grew Russia and China’s influence in the world. That should alarm anyone who sees themselves as civic & human rights supporters.

President Trump is impulsive and acts within his narrow immediate interests. He had no problem admitting he supported moving the US embassy in Israel from Tel-Aviv to Jerusalem just to please his Evangelical supporters. His “Peace for Prosperity Plan” is an empty shell, ignoring Israel’s main problem becoming a 2-nation state. Trump is great for Benjamin Netanyahu and Israel’s right-wing in the short term but is bad for Israel’s long-term interest of separating from the Palestinians and keeping Israel a national Jewish state.

As for American Jewry, Trump’s hug of Israel while marking Democratic Jews as disloyal to Israel, are anti-Semite even if he didn’t mean it. “Dual loyalty” was always used against American Jewry to show they are unfaithful to America. It was used for years by conservative elements to hurt American Jews who have traveled a long way to emerge as Americans. Jew-haters don’t need much more than President Trump’s words to understand who has loyalty to Israel and therefore less loyalty to America.

So why Biden? It is true that the Anti-Israel voices are getting stronger within the Democratic party, but I believe Biden with his calm and mature approach can ease-up things, lowering the tensions within America and abroad. Biden will be as collaborative as possible with U.S. natural allies against Chinese-Russian allegiance, working to strengthen the Democratic states’ fragile coalition, which was weakened by President Trump. Biden will also work to support Americans who got hurt with the Covid-19 Pandemic. I know America needs someone who will work to reunite it!

About the Author
Yaakov (Kobi) Cohen is an Israeli-American, born in Jerusalem and now reside to New York City where he works in a Jewish Non-for-Profit. As a political activist, Cohen is most interested in the Israeli-American Jewish relationship and its impact on the future of the Jewish world and seeking to build bridges between Israelis & Jewish Americans, or at least establish a different dialogue. Kobi is a co-founder of Israel Shelanu and Host of BALAGAN - Explaining Israeli Politics Podcast
Related Topics
Related Posts
Comments