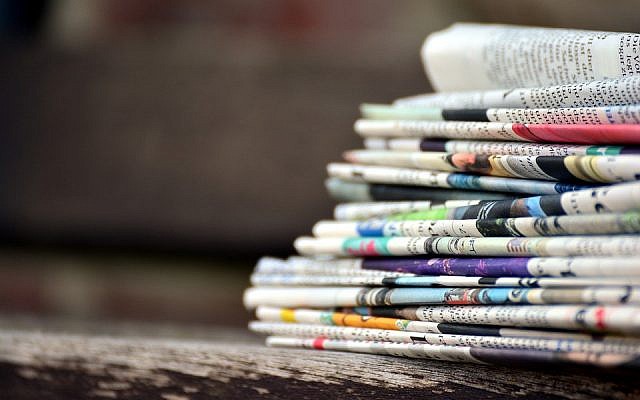 One of the factors contributing to the never-ending Diaspora Epidemic and the lingering Plague of Darkness which prevents Jews from moving to Israel is the LOCAL JEWISH NEWSPAPER. Whether they call themselves the Tennessee Jewish Tabloid, the Savanah Jewish Scroll, the Denver Jewish Daily, the Jersey Jewish Journal, the Los Angeles Jewish Labyrinth, or the Boston Jewish Bulletin, they all, with the sole exception of The Jewish Press in Brooklyn, share the common message of “The Diaspora is Glatt Kosher.” Most of their “Jewish” readers probably aren’t Jewish. In their definition of Judaism, it is enough to “feel” like Jew.  Flipping through their pages, with all of the sumptuous advertisements, you’d think the Mashiach had already arrived and settled down in Boca or Beverly Hills. In their worldview, the Diaspora is “L’hatchilla” meaning it is as valid a place to live as Israel itself.  Sparing exceptions here and there, they all raise up the banner of equality, plurality, liberalism, and “I pledge allegiance to the United States of America.” Needless to say, they refuse to print my articles and opinions. In their eyes, my belief that the Diaspora has no raison d’etre, now that the Jewish State has been established, is ugly racism. They view my efforts to open their eyes to the truth as aggressive and loathsome Fascism, and as an arrogant abuse of their Constitutional right to pursue happiness as they please. The editors, like the Spies in the wilderness, want to keep their tiny “Jewish” fiefdoms intact. After all, everyone has to make a living, and their livelihood comes from keeping the wool pulled over the eyes of their readers, encouraging their assimilated and Gentile subscribers to believe that a polar bear can be a Jew, and that the word of the Lord is destined to go forth to the world from Los Angeles, not Jerusalem.

No doubt, if there had been a local Wilderness Jewish Journal, back in the days when God was leading the Children of Israel to the Promised Land, its front-page reaction to Joshua and Calev would have sounded like this:

“Joshua and Calev, two known followers of Meir Kahane, came out in sharp protest against the leaders of the Wilderness Jewish Federation, who warned the people of the terrible dangers awaiting them if they ventured into the Land of Israel – a land of milk and honey filled with fierce savages and ferocious giants. God, also known to be a fanatic Kahanist, reprimanded the wilderness leaders for not having faith in Him, and for rebelling against His command to enter the Land. The well-paid leaders retorted, ‘If You get rid of the savages and giants, we will agree to come to Israel for ten-day visits, but we are staying here in the wilderness to practice Wilderness Judaism in the way which seems best to us.’”