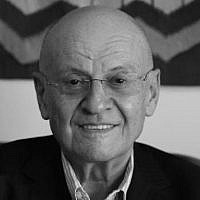 The Blogs
Shalom Wald
Apply for a Blog
Advertisement
Please note that the posts on The Blogs are contributed by third parties. The opinions, facts and any media content in them are presented solely by the authors, and neither The Times of Israel nor its partners assume any responsibility for them. Please contact us in case of abuse. In case of abuse,
Report this post.

On January 14, 2022, Beijing’s Global Times published a significant article: “Iranian FM visits China 4 days after GCC trip: China has no enemies, only friends in Middle East.” Other Chinese media picked up the story. Global Times is owned by the Communist Party’s People’s Daily. When China wants to communicate its positions to the wider world, it often does so in English via this paper.

The tone of the article is anti-American, a response to America’s trade, political, and psychological belligerence. “The US continuously cultivates the [Middle East] region for its own interest …creating chaos and conflicts,” but as the US presence is now shrinking, “the tensions in the region are cooling down.” The article claims that China is “more trustworthy” than the US – an invitation to the region to turn toward China because it carries no colonial burden, its investments also benefit its partners, and it does not “meddle” in the internal affairs of others (meaning it does not raise human rights issues).

But no, China is not at all “seeking to take up the power vacuum left by the US” as the West claims. In protesting a bit too much, Global Times risks convincing the reader of the contrary: in fact, China is entering the Middle East, and it does want to replace the United States in the long run. As China’s links with the Middle East expand, its presence is becoming a strategic issue.

Global Times praises Iran first. Its foreign minister has just been in Beijing to discuss the implementation of the 25-year Strategic Partnership Agreement signed in 2020. Second, equally important are the Arab Gulf states. Their foreign ministers, too, visited Beijing for assurances of Chinese support. Half of China’s essential oil imports come from Iran and the Arab Gulf. And oil is the “elephant in the room.”

During the same timeframe, Turkey’s Foreign Minister arrived. The Chinese appreciate that Turkey will allow “no terrorist activities” against China. Global Times has friendly words for two more countries, war-torn Syria, which will receive China’s assistance, and Russia, with which China will maintain close coordination.

What about Israel? No words of friendship, cooperation, or historical links, but a dry factual statement: on January 24, the two countries will “celebrate” 30 years of diplomatic relations. Perhaps an implicit disapproval of Iran’s denial of Israel’s right to exist, but nothing more. However, a few days later, China’s ambassador to Israel publicly voiced exuberant praise for the “thousand-year long, everlasting friendship” between the Chinese and the Jews, and the “ever increasing political mutual trust” between China and Israel’s leaders. Two messages for two audiences, one for Iran and the Arabs, another for Israel.

Of course, Global Times knows that the Middle East is a “powder keg, given geopolitical, religious, cultural and ethnic complexities.” But China touts its positive relations with all because it has “no enemies, only friends” and “does not take sides on regional issues.” Except of course, it’s permanent, conspicuous public support for the Palestinians at the UN. But Palestine is never mentioned in the paper, nor is the collapse of Lebanon – two significant omissions. Global Times also asserts that China tries “to mitigate regional conflicts” – for which there is scant evidence.

In one respect, the West’s Middle East policies during the Cold War and China’s today are identical: these policies are not about the Middle East and the well-being of its peoples. Great power politics is about promoting self-interests and defeating rivals, then and now, and the Middle East is a means toward this end.

All countries with foreign interests have to cope with contradictory policy priorities in a conflict-ridden world. In the Middle East, until recently, China did not seem bothered by conflicting priorities. Is this changing now? Recently, China was reported to be helping Saudi-Arabia build ballistic missiles. The only country that has already used such weapons against Saudi-Arabia is Iran. Does China now feel compelled to join the traditional game of balancing local powers by playing one against another? China will learn that it is walking on thin ice. The region is gripped by fears. Existential fears. Fear of Iranian expansionism and subversion. Fear that the US will tip-toe out of the region to focus its efforts against China. If China can enhance the chances for peace, everybody would be grateful. If not, something could and probably will go wrong, particularly with Iran.

About the Author
Dr. Shalom Salomon Wald, Senior Fellow of the Jewish People Policy Institute in Jerusalem, is co-author (together with Arielle Kandel) of India, Israel and the Jewish People – From History to Geopolitics.
Related Topics
Related Posts
Comments