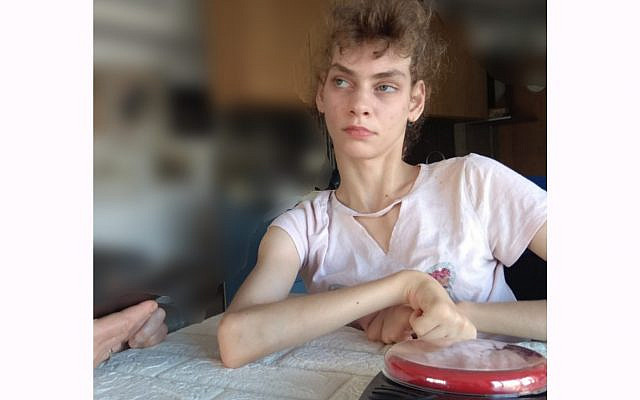 My daughter Haya, who is affected by extreme disabilities, sits in her wheelchair listening to music that she enjoys by operating a disability-friendly simple switch.

A short time ago, Aleh, Israel’s leading chain of large, closed institutions for people with disabilities honored a donor from England who passed away in June. She had been eulogized on Aleh’s website.

To mark the end of the shloshim period – the 30 days of mourning after passing – she was memorialized with a garden by Major General (Res.) Doron Almog. Almog is credited with establishing Aleh Negev, one of the four branches of the Aleh enterprise.

The donor’s work for Aleh was described on its website as “promoting the care and inclusion of people with special needs“.
As I have been endeavoring to explain for years now (“Institutions: The world goes one way, Israel and Aleh the other” as just one example), locking children and adults in institutions in no way promotes inclusion.
The damage done by institutionalization is now acknowledged everywhere in the First World – excluding Israel.

It is striking that the resident of Aleh Gedera, another Aleh branch, who passed away from COVID-19 in April [“Following a Covid-19 death at Aleh, a troubling silence“] has never merited so much as a fleeting mention, let alone a eulogy or a memorial garden on Aleh’s website or its Facebook site.

In these dystopian times, it would be appropriate for Israel to finally reassess its policies for the care of children and young adults with disabilities.

Institutional living has long been maligned by professionals as detrimental to the well-being of its residents. Emotionally, cognitively and physically it is, all agree, the worst of all living options. It still flourishes only in one developed country: Israel.

There are myriad explanations for that anomaly but one crucial one is the entrenchment in Israel’s psyche enjoyed by Aleh, it major chain of large, enclosed institutions. Remember, the residents of those institutions are at high risk for becoming seriously ill with COVID-19 by dint of their disabilities alone.

The following conditions are cited by the United States’ CDC in its long list of endangering pre-conditions:

Children who are medically complex, who have neurologic, genetic, metabolic conditions, or who have congenital heart disease are at higher risk for severe illness from COVID-19 than other children.

Below are the statistics that I received from Israel’s Ministry of Labor, Social Affairs and Social Services (משרד העבודה, הרווחה והשירותים החברתיים) on June 22, 2020 in response to my questions regarding residents of institutions for children and adults with disabilities within its purview (that includes the Aleh facilities):

In the 37 living settings under the supervision of the Disabilities Unit of the Ministry of Labor and Welfare, there were those who were quarantined or ill. Currently, 6 facilities are quarantined. 1,037 residents have been quarantined since the outbreak of Corona – today 91 residents are quarantined. In all, 37 staff members and 87 residents were diagnosed as ill. Today 8 residnts are ill. These statistics refer to all the settings in our purview.

With alarming numbers like these, and the obvious risks inherent in housing high-risk populations in close, closed quarters, I would have expected this government to rethink its policies towards people with disabilities.

Now is the time to finally play catch-up with the rest of the developed world and promote in-community living for all people with disabilities.

Instead, we only see Aleh using this pandemic to self-promote and solicit donations with heightened intensity. The government, needless to say, continues to fund Aleh and other large, closed institutions with the same largesse it always has.

But not everybody has remained mum. Below is a letter penned by a citizen with severe disabilities that has been circulating in recent days among disabilities activists. Anybody with disabilities or parents of those with disabilities is invited to co-sign it. Please contact me if you are interested in doing so.

[Note: the following is my translation of the Hebrew original]

Itzik Shmuli
Minister of Labor and Welfare
Subject: Request for a meeting to promote in-community living for people with disabilities

And we request that the funding earmarked per individual for assisted living be channeled to us so each of us can acquire the services and assistance and the support and the therapies according to his individual needs within the community.
According to our world outlook, living accommodations for people in the State of Israel are not correct and on a daily basis violate basic human rights.

In hostels for people with disabilities operated by the Ministry of Welfare, there is a serious violation of human rights and we have witnessed incidents of very severe abuse and even death in a number of hostels.

And together with you we want to change this and bring a better future for people with disabilities.

We think that we can work together with you to get to a better place.

We would like to meet with you and discuss these things.

We would be happy if you would answer positively.

With thanks and good wishes,

The photo at the top of this post shows my daughter Haya practicing her switch-pushing skills at home today and listening to the music she loves.

A VERSION of this post appears on Frimet Roth’s blog, The Good, The Bad, The Ugly