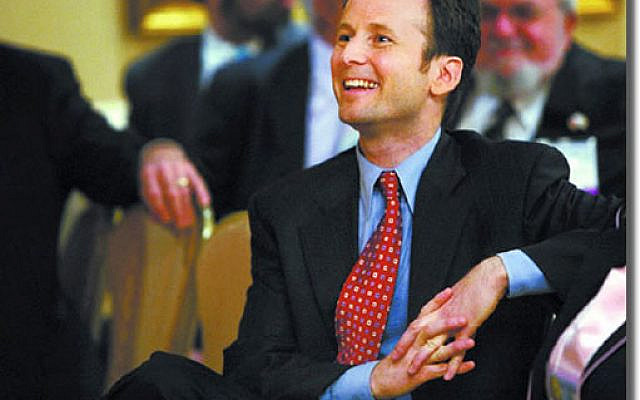 David Brog was misquoted in the documentary, "'Til Kingdom Come." (Wikipedia photo.)

In late 2020 and early 2021, Abramorama, a documentary film distributor, released “‘Til Kingdom Come” to audiences in the United States. The film seriously misinformed Jewish audiences who saw the film online via Jewish film festivals throughout the United States.

Judging from the comments made in post-screening discussions online, some Jews in the U.S. accepted the film’s premise that American Evangelicals were intent on bringing about the Second Coming of Christ by starting a war in the Middle East.

There was just one problem. The film was a veritable cornucopia of misinformation that will make reasonable folks wonder if the documentaries they watch are really telling the truth. This one wasn’t.

For example, the film, produced by filmmakers Maya Zinshtein and Abraham (Abie) Troen, included a fake quote from former U.S. President Donald Trump that made it look like he was intent on handing the West Bank over to Israel, making it impossible to form a Palestinian state.

As it turns out, the quote was cobbled together from a number of different statements made by the former president at a White House Press conference held in January 2020.

It wasn’t the only problematic quote. The same article deployed another out-of-context quote to make former U.S. Secretary of State Mike Pompeo look like he was intent on starting Armageddon in the Middle East.

But the quote in question, which spoke about the “rapture,” was made in 2015 when Pompeo was a U.S. Representative from Kansas and had nothing to do with the Middle East but was related to a U.S. Supreme Court ruling regarding same-sex marriage.

The film also portrayed Israel’s Evangelical supporters in the U.S. as promoting a showdown between Israel and the rest of the countries in the Middle East, even though the producers knew that this community helped lay the groundwork for normalization agreements between Israel and Arab countries (AKA “The Abraham Accords”).

Zinshtein and Troen had footage from Rev. Johnnie Moore talking about these efforts but left it on the cutting room floor, probably because it undermined their portrayal of American Evangelicals as a bunch of warmongers.

These three problems should convince anyone that Zinshtein and Troen’s film is not a reliable treatment of Evangelicals who support Israel, but guess what? There is yet another instance in which the filmmakers misinformed their viewers.

Zinshtein and Troen did to David Brog, founding director of Christians United for Israel, what they did to the former U.S. President — they cobbled together quotes from different parts of a speech to alter the meaning of what Brog actually said.

They sliced and diced words from a speech given at CUFI’s national conference in 2018 to make it look like he and the organization he directed wanted to deprive Palestinians of the money they need to survive and, in so doing, give the Palestinians no other option than to continue to embrace extremism and terrorize Israelis. CUFI and the Evangelicals were doing this over the objections of members of Israel’s security establishment, Zinshtein alleged.

What Zinshtein and Troen omitted from the film, however, was that Israeli Prime Minister Benjamin Netanyahu asked the White House to cut aid to UNRWA in 2018.

Zinshtein and Troen also omitted Brog’s declaration, made at the CUFI conference in Washington, D.C., that he did not want to deprive Palestinians of the U.S. aid they needed to survive.

He just wanted to change how it was given to them.

Speaking to CUFI supporters in July 2018, Brog stated explicitly that he wanted most of the money currently given to the United Nationals Relief and Works Agency given instead to the United States Agency for International Development (USAID).

The reason CUFI wanted the U.S. money shifted from UNRWA to USAID was that, according to CUFI, UNRWA uses bad criteria to determine who is entitled to UNRWA assistance. “The way UNRWA defines Palestinian refugees to include their descendants in perpetuity politicizes their plight and prolongs this conflict,” Brog said.

At issue is UNRWA’s policy of giving money to the descendants of Palestinians who lost their homes in Israel’s War of Independence in 1948. Brog and many others have concluded this policy has prolonged the conflict by subsidizing the refusal of Arab countries to give Palestinians whose ancestors came from the British Mandate citizenship in the countries they were born in. But Zinsthein and Troen did not include any of that in their “documentary.” Instead, they misquoted Brog.

In the first version released to the American public in late 2020 and early 2021, Brog is quoted as saying:

CUFI is going to go to the Hill this year and lead the way on the issue of UNRWA, the United Nations Relief and Works Agency. Our point is not that we think the Palestinians are getting too much money, although they probably are.

We think Congress should express support for limiting our contributions to Palestinian refugees. We have a friendly administration, a friendly House of Representatives, a friendly United States Senate.

Are we tired of winning? Let’s win some more!

In a subsequent version of the film, seen by this writer on June 14, 2021, the following statement is heard: “We think Congress should express support for limiting our contributions to UNRWA.”

The actual statement that came out of Brog’s mouth is as follows: “Congress should express support for limiting our contributions to UNRWA to the amount necessary to provide aid to those Palestinians who meet the standard definition of refugees.”

The words “We think,” which were likely inserted to provide logical continuity between the first and second paragraphs quoted above, came from somewhere else in Brog’s speech.

In addition to these changes, it should also be noted upfront that Brog’s words were broadcast to the viewer as if they were part of one fluid statement, when in fact, it is a series of quotes from different parts of his speech, cobbled together in a manner similar to what was done to the former president elsewhere in the film.

Will the leaders and professionals of this community speak out against the use of their genre to misinform people?

Or will they ignore the problem?