I am writing today with some trepidation. When I express my opinions, I try to do so honestly yet diplomatically without name-calling or negative adjectives. However, I am now compelled as a respectful supporter of Israel to add my perspective on Mike Evans comments this past week. Evans has launched a verbal salvo into the relationships between Christians and Jews.

Much of what I’m writing is aimed at clarifying a few misunderstandings that have been bandied about, assumed, and/or generalized. First, not all proIsrael Christians are “followers” of Mike Evans. In his effort to mobilize Christians into interfering with Israeli elections he proclaims, “77 million followers” as “MY followers.” I am not his follower. And I daresay there may be many Evans “non-followers.” I follow the glorious God of Abraham, Isaac, and Jacob.

On his web site Evans describes himself in part this way: “Dr. Mike Evans is considered one of the world’s leading experts on Israel and the Middle East, and he is one of the most sought-after speakers on the subject.” Yes, he’s written multiple books, founded the Christian Zionist Museum in Jerusalem, and for decades has engaged in activism on behalf of Israel including the Jerusalem Prayer Team. I am not going to reference the specific quotes in his letter to Naftali Bennett, nor his press conference last Tuesday. Frankly, I’m saddened to repeat them.

Yet, before I make additional statements, please know I am a proIsrael Christian. Our Christian community has its share of internal and external disagreements, its numerous denominations, and its relational disasters. Some of our sincerely meant words and actions about or toward Israel or the Jewish community are sometimes unhelpful or create disharmony.

Nevertheless, Evans for all he has done to stand with Israel, has unfortunately launched a verbal salvo that has blown up and seems to threaten some of the warm relationships built especially over the last few decades between Christians and Jews. Evans’ tirade is deepening some Jewish suspicions about Christians. ProIsrael Christians like me are disturbed.

For decades, I, along with other Christians, have have not questioned some of Evans’ evident efforts. But his particular bent toward arrogance, self-aggrandizement, and what smacks of narcissism have caused concern. Certainly, humankind in general struggles with these kinds of weaknesses, and many more, but the degree of intensity and its habitual nature affects its impact in every community. Proverbs 16:18 is a reminder, “Pride goes before destruction, a haughty spirit before a fall.” Understand please. I’m not wishing destruction on Mike Evans. Yet, we all need correction and it’s mostly a painful process.

Thus, Evans’ own self-defeating actions and words are shocking, but hopefully not defeating our robust relationships with the Jewish community, now more valuable than ever. Amid exponential security threats and hateful propaganda, waves of antisemitism are flooding the world. Nevertheless, we are beyond doubt, better together, stronger together, and linked together in the Older and New Testaments since ancient times when Judaism birthed Christianity.

I want to be clear. It is not my place to interfere with Israeli elections. I’m not a citizen. Israel has that right and privilege as a parliamentary democracy. While Netanyahu has been a favorite of mine-and millions of proIsrael Christians-our advocacy for Israel does not depend on whom Israelis elect as their leaders. I stand with Israel no matter who is in charge. My role is to pray for Israel, advocate for the US-Israel relationship in the United States Congress, help in tangible ways, and oppose propaganda and antisemitism through my writing.

My stance for Israel is not even based on getting blessings from God if I bless Israel noted in Genesis 12:3.”I will bless those who bless you, and whoever curses you I will curse; and all peoples on earth will be blessed through you.”

I stand with Israel because of God’s eternal covenants beginning with Abraham. Quite simply, it’s the right thing to do.

In the last twenty years, I am privileged-and humbled-to have worked first as a volunteer with Ambassador Earl Cox, founder of Israel Always, then as staff for nine years as AIPAC’s Southeast Region Christian Outreach Director. After retirement I ran a short part-time project for International Christian Embassy Jerusalem USA. I’m now a freelance writer.

I have worked with many churches, many pastors, many organizational leaders, in many denominations. I have rejoiced in the important accomplishments achieved when Jews and Christians work together and also enjoy my warm friendships in the Jewish community. I have run into very few Christians though who view Mike Evans as their leader.

Mike Evans is not the sole American leader of Christians when it comes to Israel. Many well-known proIsrael leaders populate the United States along with millions of proIsrael Americans, most of whom you will never hear about. Like me, they are not famous. They are not on TV. They don’t have podcasts. Most of them are not wealthy. But they are highly motivated and active in thousands of small ways which add up to big benefits for Israel, our second favorite nation behind our United States. 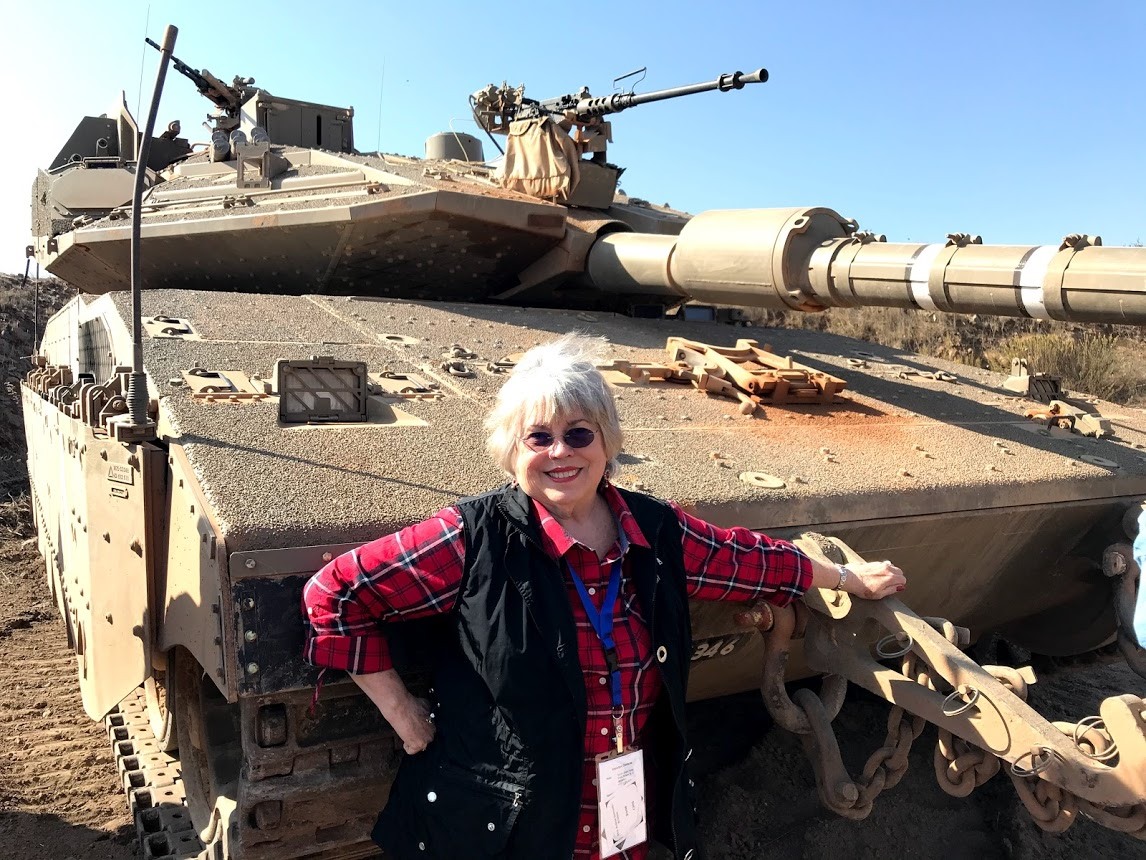 Arlene Bridges Samuels next to Israel’s “chariot”, the Merkava tank.

For example, through Israel’s Operation Life Shield, Christians raise money in their small cities for portable bomb shelters. Although on Social Security, some manage to send $25 a month for Holocaust survivors living at the Haifa Home founded by International Christian Embassy Jerusalem. (ICEJ). When Israel is in a deadly crisis on one of their borders, hundreds maybe thousands of small prayer groups jump on Zoom or telephone calls to pray for Israeli safety.

Some belong to the Friends of the IDF charity and send gift packages to Lone Soldiers. Others, like the small charity, Maasay Yadav, collect humanitarian aid to fill up containers for shipments to Israel. Two of their specialties are hand made quilts for Holocaust survivors and stuffed animals for hospitalized children.

Let’s face it. Drama has dominated Israeli politics since ancient times with no kings, bad kings, and good kings. Its political baggage is packed with failures and successes, bad decisions, good decisions, wars, betrayals, and deaths. Israel still survives and in fact, thrives with its innovations and blessings to the world. God Himself is in charge no matter who it seems is in charge in the Prime Minister’s office, Knesset, or for that matter the Oval Office or the US Congress. Yet, the United States and Israel-despite controversial decisions, challenges, and upheavals-have changed history for the better.

Let’s move beyond the Evans rant, and instead focus on life and death issues. Opposing Iran’s threats to Israel, the Middle East, and yes, Iran’s biggest target, the USA. Oppose antisemitism! Do all within our power to set both of our nations on the right paths each in our OWN democracies. Let’s make sure we are Israel’s best friends. Not telling them what to do, whom to elect, or how to conduct their defensive wars. The God of Abraham, Isaac, and Jacob knows what He is doing. After all, He revived Israel into a modern nation and with its ancient language. He’s making it possible for Jews worldwide to come home. He’s a promise-keeping God.

“He will raise a signal for the nations and will assemble the banished of Israel, and gather the dispersed of Judah from the four corners of the earth.” – Isaiah 11:12

“For I know the plans I have for you, declares the LORD, plans for welfare and not for evil, to give you a future and a hope.” Jeremiah 29:11