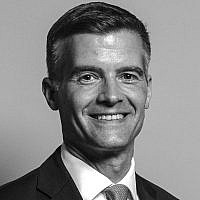 The Blogs
Mark Harper
Apply for a Blog
Please note that the posts on The Blogs are contributed by third parties. The opinions, facts and any media content in them are presented solely by the authors, and neither The Times of Israel nor its partners assume any responsibility for them. Please contact us in case of abuse. In case of abuse,
Report this post.

Looking out over Be’er Sheva from the balcony of a shiny new high-rise building, it was impossible not to marvel at Israel’s ambitious plan to turn the barren and dusty landscape into the world’s foremost centre for cyber defence.

The Gav Yam Advanced Technologies Park in Be’er Sheva is just one example of how Israel is proudly striding into the future. Seven parliamentary colleagues and I were able to see this for ourselves last week as we visited Israel for a trade-focused visit in coordination with Conservative Friends of Israel.

The UK and Israel are major trading partners and it was a great opportunity to celebrate record levels of UK-Israel trade and learn about the ‘Start-up nation’.

Delegations from across the world regularly visit Israel to find out about its success in the world of science and technology.

Much has been made of the reasons for Israel’s tech success but, for me, there is one that stands above all others – necessity. Faced with a scarcity of natural resources and enemies using ever more inventive ways to attack, the Jewish state has been compelled to look for solutions.

This was vividly brought home last week when Israel faced attack by as many as 200 rockets and mortars from Gaza-based terror groups. Already a game-changer, for the first time, the Iron Dome anti-missile defence system was used to successfully intercept dozens of mortar shells that are in the air for a mere 15 seconds before exploding on the ground – something it was unable to achieve in the 2014 conflict. The necessity to adapt and develop solutions to these threats is a key part of the impressive start-up ecosystem.

Not content with the many challenges facing the country, Israel’s greatest minds are now actively looking to solve problems facing
countries elsewhere in the world.

From our cultural life and legal system through to our defence and security agencies, Israel regards the UK as a key ally and it was great to see that we are increasingly working together to solve challenges.  Last week alone, the UK Science Minister Sam Gyimah was in Israel to sign two new agreements in science and innovation with our Israeli partners.

At SodaStream’s factory in Rahat, we met a Palestinian line manager in charge of Israeli Jewish, Arab and Bedouin workers. Demonstrating the company’s celebration of diversity, it also exposed the boycott, divestment and sanctions (BDS) movement for the harm it had caused to many Palestinians who lost their jobs when it was pressured into relocating.

Another memorable visit was to the Magen David Adom ambulance dispatch centre in Jerusalem, where we saw its advanced technologies shortening response times to medical emergencies, as well as its pioneering video communication, which enables medics to receive a live feed of an emergency before first responders arrive.

Together with colleagues, I will continue to encourage those involved in planning the Duke of Cambridge’s visit to provide a programme that shows the true Israel beyond the conflict.

It is this Israel, a powerhouse of innovation, creativity and hope, that the Duke should witness on his landmark visit.