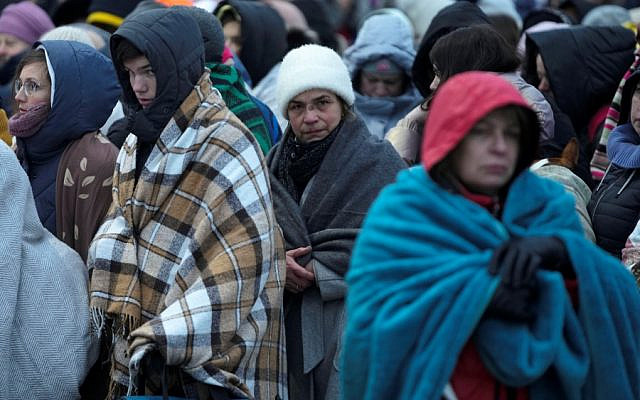 Refugees, mostly women and children, wait in a crowd for transportation after fleeing from the Ukraine and arriving at the border crossing in Medyka, Poland, March 7, 2022. (AP Photo/Markus Schreiber)

International Women’s Day is being marked this year as the Russian invasion of Ukraine continues to wreak havoc on the country and its people, unleashing ominous ripple effects throughout the globe — including deep into the Middle East. This war, like other violent conflagrations in the 21st century, disproportionately harms civilian populations, causes massive internal displacements and swells the ranks of refugees. Women constitute a majority of those adversely affected by these tragic events.

Official Israel, measured in expressing support for those undergoing what is nothing short of a humanitarian disaster, has been tardy in supplying assistance for those in dire need. At the same time, many Israelis — including a large number of diverse women — unable to stand by as these tumultuous events are unfolding, have hastened to articulate their outrage, mobilized to back informal aid efforts, and have joined those volunteering on the ground. Not for the first time, the discrepancy between words and deeds, between the formal and the informal, between perceived interests and fundamental human morality, speaks volumes — especially when gender issues are involved

In a twist of fate, a much-anticipated national action plan for gender equality, the culmination of the intensive work of an inter-ministerial committee during the last few months, slated for adoption at the government meeting on Sunday to coincide with the March 8th anniversary of International Women’s Day, was delayed because of Prime Minister Bennett’s shuttle diplomacy in Eastern Europe. Even more ironically, a closer look at this detailed document — finally completed eight years after the promulgation of Government Resolution 2331 of December 14, 2014, prompted by the United Nations call to create national action plans to implement UN Security Council Resolution 1325 on women, war, and their centrality in conflict prevention and resolution — reveals that it fails to even broach the heart of this path-breaking decision. This begs the question of what the unique needs and contributions of women are in conflict situations such as Ukraine today, and what Israel and Israelis can do to assure that they are carried out sensitively and effectively.

Even those who have only given a cursory glance to the war scenes flooding the airwaves cannot help but note that Ukrainian women are everywhere. They are on the battlefield: an estimated 31,000 women were enlisted in March 2021 (22.5 percent of the armed forces) and many have joined since the fighting began. They constitute 21% of the democratically elected parliament, are prominent in the media, and influential in promoting that solidarity so necessary to resist the Russian invasion and to advocate for justice and democracy. They have helped organize civilian defense, food, and shelter in bombarded cities. They are caring for those who have been evicted from their homes. And, yes, they — along with their children and the elderly — make up the vast majority of refugees spilling over to neighboring countries and beyond.

So, while contemporary wars affect civilians of all genders — as stated in UNSCR 1325 and its various amendments — women experience these armed conflicts in different ways than their male counterparts. Several principles embedded in this foundational document are painfully visible in the Ukrainian conundrum: 1) the need for protection of women in violent confrontations and in their aftermath; 2) the obligation to ensure the participation of women in decision-making circles and civil society in the prevention, management, and resolution of armed conflicts; and 3) the significance of the incorporation of the perspectives of diverse women in all aspects related to the handling of conflict and peace-making. It is in this spirit that the global mobilization of women, including those from Israel, is being conducted and is playing such a significant role in ongoing humanitarian efforts.

Yet from the outset, Israeli responses generally, and on the gender dimension in particular, have been extremely equivocal. The official separation between heart (empathy for Ukrainians and their plight) and mind (realpolitik considerations supposedly and perhaps erroneously favoring Russia) has played out in the odd good cop (Lapid) – bad cop (Bennett) dance that has to date evoked little understanding along with large measures of derision from democratic allies abroad.

Inevitably, this approach has spilled over into matters related to entry into Israel and opening its gates to the small number of mostly women asylum-seekers on its doorstep. The clear priority given to Jews and newcomers eligible under the Law of Return has precluded the welcoming of even a trickle of refugees (except those lucky enough to have friends or relatives willing and able to post guarantees), leading to an uproar in Israel and to growing condemnation on moral, legal, and historical grounds from the international community and many Jews throughout the world.

Israeli women’s, refugee, and civil rights organizations have been at the forefront of this pushback. Building on a coalition of women’s and civil rights groups instrumental in preparing a draft of a comprehensive Israeli action plan to implement UN Resolution 1325 in 2014, lobbying the government to express its formal support, and advocating since then for its implementation, they issued yet another call to apply its guidelines to Israel’s policy to the Ukraine. Dozens of similar appeals have been circulated by professional and voluntary associations. Led by Itach-Ma’aki and Al-Tufula, 31 primarily feminist civil society groups also refused to back the newly-minted government action plan because of the absence of any mention of the ongoing Israeli-Palestinian conundrum and its limited application of its core gender mainstreaming principles. These organizations, along with a multiplicity of human aid and refugee-support initiatives, have also been central in pressing for the mitigation of Minister of Interior Ayelet Shaked’s hardline policy on granting refugee status to migrants from the war zone.

Some of these groups have also formed an alliance to oppose the reenactment of the amendment to what has become known as the “citizenship law,” which prohibits granting citizen status to Palestinians married to Israeli citizens — a byproduct of the ongoing Palestinian-Israeli conflict. They and others (especially Isha L’Isha) have continued to work on other gender aspects related to the occupation and to discrimination against Arab society in Israel, such as home demolitions, evictions, sub-standard infrastructure, and poor educational facilities. For them, the key topics highlighted in the government plan — gender- driven violence, work-life balance, promotion of gender equality in the workplace, and augmenting women’s representation — cannot be effectively addressed without altering the volatile environment in which they are taking place.

In the Israeli coverage of the war and its alarming human byproducts, the vast majority of the panels have been packed with men whose expertise in the subject at hand is limited at best. The most intelligent and informed analysts have been women — most notably journalists and former MKs Ksenia Svetlova and Nino Abesadze, international consultant Dr. Anat Hochberg Marom, and Channel 12 reporter on the ground Efrat Lachter. Their intriguing, sensitive and nuanced commentary is proving to be a refreshing counterpoint to the verbal inundation that persists in muddling the airwaves in a feeble attempt to substitute for the transmission of critical facts and interpretations of one of the most momentous moments in recent memory.

These activities are beginning to make a dent. Oftentimes even the greatest autocrats who feed on machoism and chauvinism (Putin is just the most glaring of a long list of such personalities today) are forced by civilians — and especially mothers, daughters and sisters of men sent to aggressive wars without understanding their purpose — to rethink their actions. This is happening in Russia now, as it did in Israel after the First Lebanon War, and for the past two decades. It has swayed leaders in the past and is beginning to have an impact now, although much more needs to be done to tilt the balance.

So, this International Women’s Day, civilians in Israel (and throughout the world) are at the forefront. They are taking a chapter from the experiences of Ukrainian women alongside men, internalizing the pain of their plight, the immensity of their courage, the extent of their perseverance, and the depth of their determination to defend their values and way of life. And while their government is still dragging its feet on crucial matters, they are not only showing the way for a more humane Israel abroad, but are also laying the foundation for a just society at home.

This is perhaps the most powerful message that can be transmitted on International Women’s Day in 2022: gender equality, justice and democracy go together. Their realization demands persistent, unwavering and committed action to mitigate war, violence and the human suffering that it brings in its wake. Without altering this context, no program for improving the status of women and promoting gender equality has a chance. Would that those at the helm internalize this call for the wellbeing and security of women and men here and everywhere.