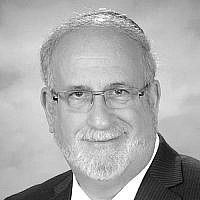 The Blogs
Simcha Weiser
Apply for a Blog
Please note that the posts on The Blogs are contributed by third parties. The opinions, facts and any media content in them are presented solely by the authors, and neither The Times of Israel nor its partners assume any responsibility for them. Please contact us in case of abuse. In case of abuse,
Report this post. 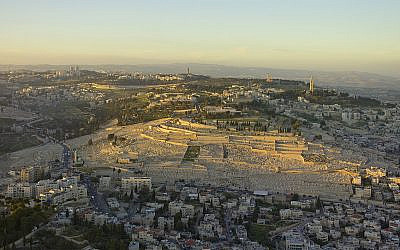 An aerial view of the Mount of Olives. Credit: Andrew Shiva via Wikimedia Commons.

A great deal was happening in the world on Tuesday, June 30, 1942. General Erwin Rommel was leading the Axis forces against the British, sweeping across North Africa from Libya to Egypt, and threatening the British ships in Alexandria and the British forces based in Cairo. Mussolini flew in from Italy, preparing to celebrate the impending victory. German U-boats controlled the Atlantic and the German Army was planning its advance to capture Stalingrad.

In Cairo, in the face of Rommel’s sweep across North Africa, the British planned a contingent retreat all the way up to Syria should Axis troops breakthrough at Al-Alamein. The Jewish community in British Palestine understood full well the implications for their survival should German forces occupy Tel Aviv and Jerusalem. The New York Times on this date, on page 7, cited reports that 1 million Jews had been “slaughtered” in Europe.

One man living in Tel Aviv decided to take action. Rabbi Yisroel Friedman, the 85-year-old Chassid known as the Husiatyn Rebbe, declared a fast and announced that all should gather on the Mount of Olives at a particular spot — the gravesite of Rabbi Chaim ibn Attar (known as the Ohr HaChaim HaKadosh, or Rabbi Chaim). Special prayers were offered at this holy grave; Rabbi Chaim was buried there in 1743.

Rabbi Friedman was himself a recent oleh (immigrant to Israel), having arrived in Haifa in 1937 and choosing to live in Tel Aviv. Before leaving Europe, the rabbi warned his Chassidic followers that it was time to leave Europe.

According to one eyewitness account, several thousand people gathered on this Tuesday halfway up the Mount of Olives, surrounding the grave of Rabbi Chaim. The Hebrew date, 15 Tammuz, coincided with the yahrzeit (date of passing) of Rabbi Chaim. Those present pleaded for the protection of Jerusalem, Tel Aviv, and the various settlements throughout what was to become Israel.

After some time on the Mount of Olives, Rabbi Friedman reassured those gathered that all would be well and that everyone could now go home.

It is noteworthy that history records that on July 1, 1942, the advance of the Axis forces under Field Marshal Erwin Rommel came to a standstill. Then, after weeks of maneuvers, in November 1942 the Axis forces were defeated by the British. The Jewish population of Palestine breathed a collective sigh of relief, and there was no further threat from the Axis powers.

Many historians posit that the Battle of Stalingrad during the winter of 1942-1943 was the turning point of the war in Europe. One knowledgeable observer, however, points to a date. German Field Marshal Wilhelm Keitel, in his memoir written just before his execution in Nuremberg for crimes against humanity in 1946, stated that on June 30, 1942, Germany reached its zenith, and its steady decline began immediately thereafter. Field Marshal Keitel personally signed Germany’s surrender to the Russians on May 8, 1945.

Not personally aware of this history at the time, I found myself on the Mount of Olives on July 16, 1992, which also coincided with the yahrzeit of Rabbi Chaim, exactly 50 years on the Hebrew calendar after the events described above. I was there for the unveiling of Mrs. Helen Weintraub, an influential supporter of Jewish education and learning in San Diego. I saw hundreds gathering around the grave of Rabbi Chaim, lower down on the Mount of Olives. Little did I know the importance of their prayers. Now I do.