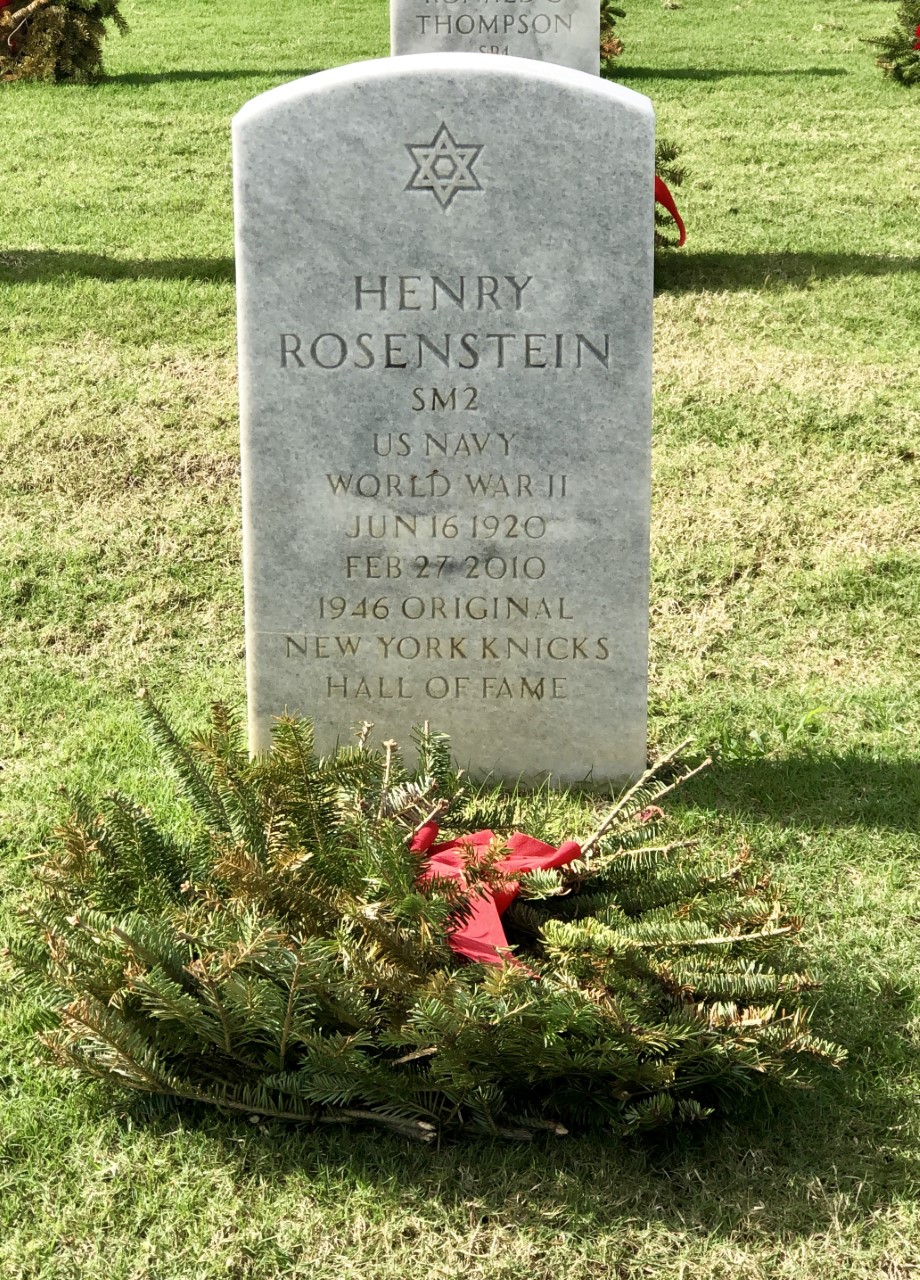 Henry Rosenstein is buried in the South Florida National Military Cemetery.  He had a “Christmas Wreath” on his gravesite when I photographed his resting place.

After serving in WWII, Rosenstein played for the newly created New York Knicks basketball team.  Rosenstein was one of six Jews on the team as the team went on to win the first-ever National Basketball Association championship, 1946.  Shortly after, he was traded because the team had too many Jews. The Knicks were too Jewish.  The owners wanted to ethnically broaden the marketing reach of the franchise. Basketball was dominated by Jews and Jewish players in the early years.

Rosenstein played on a few years and passed into obscurity. 1998, Rosenstein was inducted into the National Jewish Sports Hall of Fame. 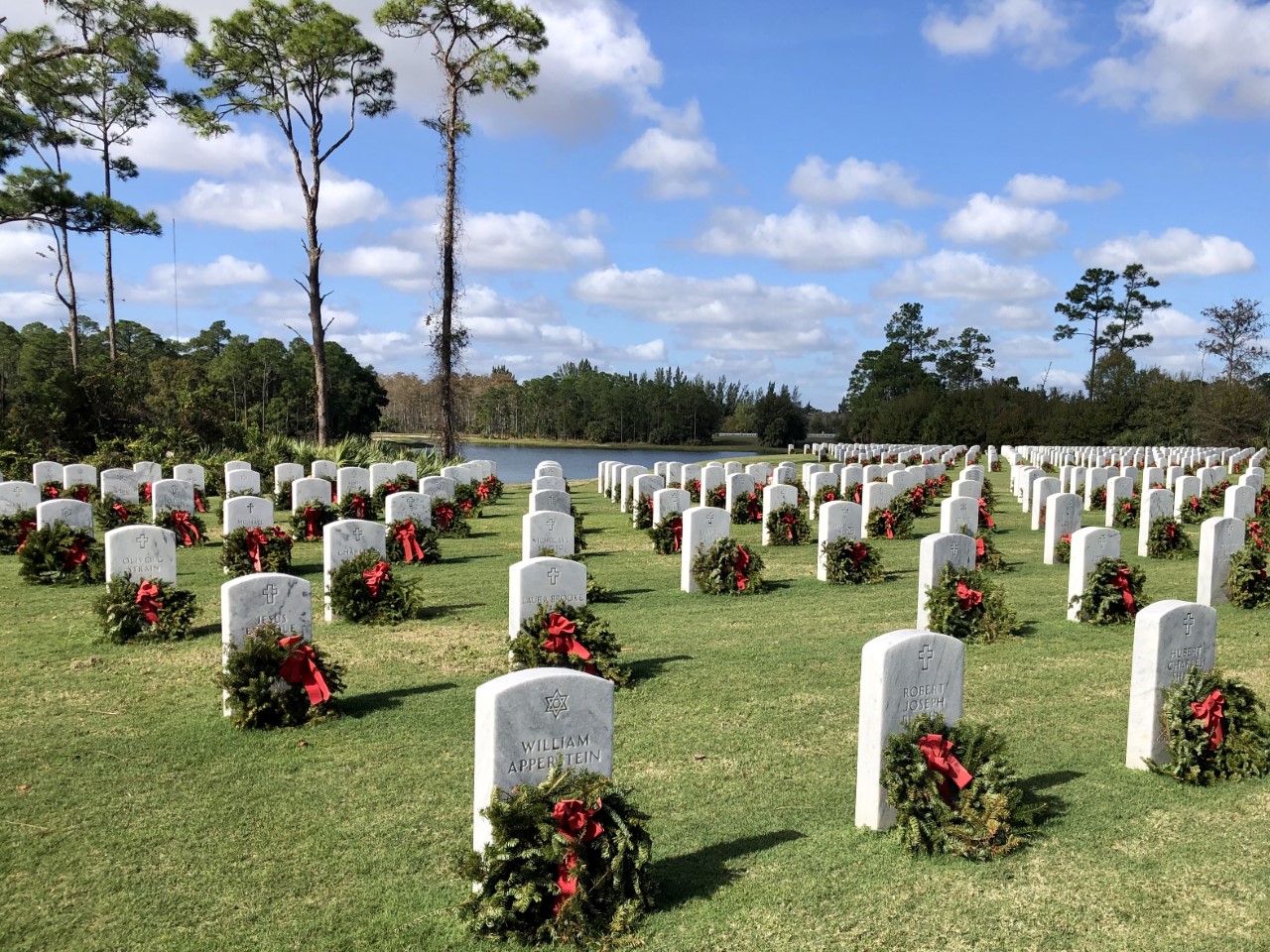 Every year, about Christmas, Wreaths Across America places green circular pine wreaths with a bright red bow on the graves of every American veteran they can to honor their memory and respect their service to America.  2018, 1.8 million wreaths were placed. Rosenstein’s grave had a wreath placed on it. A memorial motto in the cemetery is “No Soldier Should Ever Be Forgotten.

Morrill Worcester is the owner of Worcester Wreath Company in Maine. Nearing the end of the Christmas ordering season, Worcester had fabricated 5,000 wreaths too many.  He did not want to throw them away. Working with Senator Olympia Snowe, Worcester drove the Wreaths to Washington, D.C., donating them to Arlington National Cemetery. The American Legion, the Veterans of Foreign Wars and volunteers placed the wreaths on the graves of soldiers in an old section of Arlington where family had long passed and few came to visit the fallen anymore.

Over the years the annual effort of honor, respect and memory has grown into an enormous national effort.  All those resting in National Military Cemeteries across the United States are given a wreath of memory, Christian, Taoist, Shinto, Hindu, Jew, Muslim and atheist, Black, White, Red, Yellow, without distinction.

The soldiers rest, side by side as Americans. No religious service is involved in the wreath laying. If a family objects, every effort is made to respect those wishes and not place a wreath.

South Florida National Cemetery has many Jewish graves.  Almost all of them had wreaths.  A number did not.  Perhaps the families objected.  It is more likely that the families either did not know of the wreath gesture, had not visited the gravesite themselves in many years, did not care, or more likely wanted, like the veteran resting in the National Cemetery, they did not want to be excluded from the hard-won, commonality as Americans.

For years, Jewish voices rose to object to “Christmas Wreaths” being placed on Jewish graves.  The American Jewish community is split on the growing issue.  Some object to placing an object associated with Christianity on a Jewish grave.

Jews have culturally influenced the form of the American Christmas season for years helping transform the religious holiday into an ecumenical, idealized New England, Currier and Ives lithograph of white snow and warm hearths inclusive of all.  Jews wrote many of the great Christmas songs, Jingle Bells, Rudolph the Red-Nosed Reindeer, Have Yourself a Merry Little Christmas, Santa Claus is Coming to Town and the universally loved, White Christmas by Irving Berlin. Movies, Holiday Inn, Miracle on 34th Street, White Christmas to name a few with heavy Jewish influence, are watched every season.

Jews wanted to be included in the season of good feelings. The WWII Jewish generation transformed Chanukah, a military victory for religious intolerance, which frequently pitted Hellenized Jew against Conservative Jew, into a quasi-Christmas experience.  Doing Chanukah meant in many households, Jewish children got gifts for every night of the eight nights of Chanukah candle lightings while Christian children only got gifts once on Christmas morning.

The bloody war against the Syrian Greeks be damned and forgotten.

Since the first Jew came to America, the goal of Jews was to be free to choose to be Jews or to shed their payyahs of difference. America gave them their wish.

South Park is an American adult animated sitcom.  It is sarcastic, biting, questioning and cynical. One episode, the Jewish character, Kyle Broflovski laments about Christmas.

“It’s hard to be a Jew on Christmas. My friends won’t let me join in any games. And I can’t sing Christmas songs or decorate a Christmas tree Or leave water out for Rudolph, cause there’s something wrong with me. My people don’t believe in Jesus Christ divinity.. I’m a Jew, a lonely Jew, on Christmas. Hannukah is nice, but why is it That Santa passes over my house every year. And instead of eating ham I have to eat kosher latki Instead of Silent Night I’m singing “Hu, haghtol gavish” And what the f*ck is up with lighting all these f*cking candles tell me please.. I’m a Jew, a lonely Jew, I’d me merry, but I’m Hebrew On Christmas.”

Some Florida Jews have gone to war not to have wreaths placed on Jewish graves during the Christmas season.  Wreaths Across America has advised all who are placing wreaths to be respectful of Jewish grave sites and follow local Cemetery policy about wreath placements. Hindu, Shinto, Taoist, even Muslim associations have been comparatively quiet about the issue.

Other Jews prefer not to start a war of wreaths as anti-Semitism is rising. During the season of goodwill for all, is this the best time to fight?

A more obvious retort is what are the Jews doing to honor and recognize all American veterans who rest in the country’s National Cemeteries – very little.

Several years ago, a Christian struggled successfully to bring a Jewish Chaplains Memorial to Arlington National Cemetery. It was placed ceremoniously on Chaplains Hill.  There had never been a memorial to Jewish Chaplains who died in military service before.  A Christian felt it was needed to recognize the commonality of Americans symbolized by the famed Four Chaplains of the terrible sinking of the Dorchester troop ship in WWII.  Four Chaplains, of different paths to God, including Jewish Chaplain Lt. Alexander Goode gave their life jackets to random sailors as the torpedoed ship sank in the frigid North Atlantic.  The Chaplains linked arms and prayed, each in his own way to God, as they vanished beneath the waters, together as Americans.

JASHP was privileged to bring the Jewish Chaplains Memorial to the U.S. Naval Academy where it sat on the Bemah of the Uriah Levy Chapel before it traveled on to Arlington.  The Commandant of the Naval Academy, for the first time in Annapolis history, sat on the Bemah honoring American Jewish military sacrifice.

American Jews, or Jewish Americans if you prefer, are Balkanized by identity politics today. The rise of rabid anti-Semitism on the left and right is unable to bring Jewish commonality or staunch Jewish internecine conflict. The once solid wall of American Jewish support for Israel is darkening.