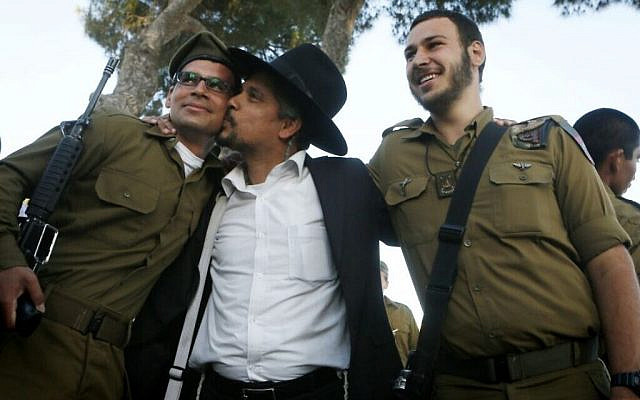 A religious Jewish soldier is embraced by an ultra-Orthodox Jewish family member after a swearing-in ceremony for the IDF Nahal Haredi unit, at Ammunition Hill in Jerusalem, May 26, 2012. (Miriam Alster/Flash90)

Right after receiving the Torah, we receive some very technical commandments regarding the construction of a Mizbe’ ach—an altar.

“An altar of earth you shall make for Me, and you shall slaughter beside it your burnt offerings and your peace offerings, your sheep and your cattle. Wherever I allow My name to be mentioned, I will come to you and bless you. “(Exodus chapter 20)

The commandments we got at Sinai are followed directly with a call for action and the laws of ritual(see Ibn Ezra here). In the rabbinic tradition, this commandment is here to tell us that the alter we make must be connected to the earth and may not be placed above the ground.

The Torah continues to get into the details:

“And when you make for Me an altar of stones, you shall not build them of hewn stones, lest you wield your sword upon it and desecrate it. And you shall not ascend with steps upon My altar so that your nakedness shall not be exposed upon it.’ “

The commandments concerning the Mizbe’ ach keep piling us. When making the alter to serve God, we must make sure the stone alter is not cut or shaped with metal tools. We must also make sure we do not ascend to it on stones; a ramp on which we can walk smoothly and with dignity to reach the top of the altar must be erected. Rashi, Rabbi Shlomo Yitzchaki, (Troyes, France (1040-1105) knows as the greatest and most concise commentator, perhaps both for the same reason, spares no words here. Citing the Talmud and Midrash, Rashi outlines a lesson from the alter, which applies to our everyday lives.

Explaining the reason for the prohibition on using a sward or any metal to build the alter Rashi reasons:

“for the altar was created to lengthen man’s days, and iron was created to shorten man’s days [because it is used to make swords]. It is improper that the “shortener” be wielded over the “lengthener” (Middoth 3:4). Moreover, the altar makes peace between Israel and their Father in heaven. Therefore, the cutter and destroyer shall not come upon it… if stones, which neither see, hear, nor speak, because [of the fact that] they make peace, the Torah said, “You shall not wield iron upon them” (Deut. 27:5), how much more [are we certain that] one who makes peace between husband and wife, between family and family, between man and his fellow, will have no troubles befall him!”

By virtue of being a secondary vehicle for peace between man and Creator, the alter in the Temple deserves special protections despite its lack of free choice or any humanity. One can just imagine how much more so a human being who has free choice—with all the challenges and privileges that come with it—and works to brings peace between other people should be respected. In other words, the implications of an obligation to protect sacred objects must apply tenfold to protecting our fellow human beings.

But this is not the only example. Rashi, usually very sparing of words, goes on to explain the prohibition against ascending to alter with steps, rather than the more dignified ramp.

“Now these matters are a kal vachomer [a fortiori] conclusion, that if [concerning] these stones-which have no intelligence to object to their humiliation-the Torah said that because they are necessary, you shall not behave toward them in a humiliating manner. [In contrast,] your friend, who is [created] in the likeness of your Creator and who does object to being humiliated, how much more [must you be careful not to embarrass him]!“

While talking about the technical laws of how to construct an alter the rabbis saw an entirely new dimension of the verse—the importance of treating others with dignity. Why do Rashi and earlier rabbis go into such great detail here when talking about a ritual lesson?

All too often, when discussing the laws of ritual, technical details may distract us from the ultimate goal: respecting the dignity of God’s image, which has been sacredly imbued into His creation. The danger of losing sight of the overarching principle while observing the details is enormous.

The Tosefta in tractate Yoma offers a harrowing account of what happens when such dangers are not considered.”

“It happened that two priests were running to go up the ramp. One pushed his fellow into the four cubit space. He took a knife and stabbed him in the chest. R. Zadok came and stood on the steps leading up the sanctuary and said, “Hear me my Israelite brothers. Behold it says, (Deuteronomy 21) ‘When one finds a dead body…and the elders and judges shall go out and measure…’ Let us measure who should bring the calf, the sanctuary or the courtyards.” Everyone groaned and cried. Afterwards the father of the young [priest] came and said, “My brothers, I am your atonement. My son’s pulse is still beating, and the knife has not yet been defiled.” This shows that the impurity of the knife was more difficulty for Israel than bloodshed.”

To try and imagine the scenario of this episode, is both terrifying and eye-opening. As the young, pure, beautiful, and earnest Kohen is laying there in his blood having just been stabbed for trying to get to do the Mitzvah first, his fellow Kohanim debate the laws of purity and impurity. His very own father is more worried about getting his son out before he make the holy sanctuary impure rather than clutching his son’s hand in his last moments. The failure to recognize that ritual laws are only means to a higher goal is a real danger underlying religious life. The repeated failure of many individuals and groups to recognize that the Neshama—the soul—the Godly image that is in every human being outweighs the sanctity of any religious item is a lesson we must learn from. The Torah and the rabbis are imparting to us the most potent post-Sinai lesson we need once we get the laws of ritual. They are telling us: remember, remember these rituals are there to protect a higher ideal, the sanctity of human life. Remember that if you respect the alter because it bears the name of God, you must also make sure you recognize the image of God in your friend, neighbor, spouse, or in the stranger. Showing disrespect to your fellow human being is far worse than disrespecting an inanimate object, albeit carrying the name of God on it. The dignity of the alter should serve as a lesson to the dignity of a human.