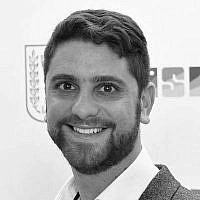 The Blogs
Matias Sakkal
Apply for a Blog
Advertisement
Please note that the posts on The Blogs are contributed by third parties. The opinions, facts and any media content in them are presented solely by the authors, and neither The Times of Israel nor its partners assume any responsibility for them. Please contact us in case of abuse. In case of abuse,
Report this post. 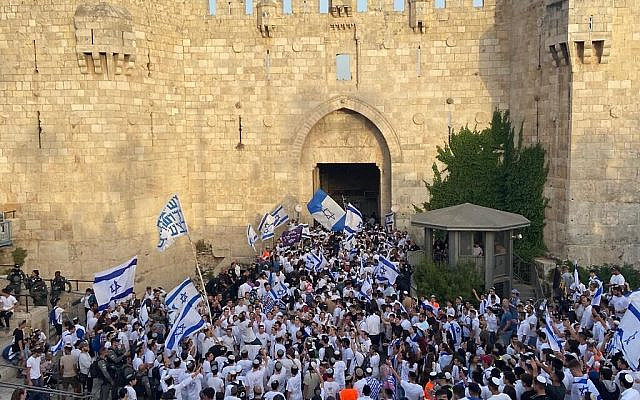 Thousands of Jews wave Israeli flags as they celebrate Jerusalem Day at Damascus Gate in Jerusalem's Old City, May 29, 2022. (Aaron Boxerman/Times of Israel)

Yom Yerushalayim, Jerusalem Day is the day on which Israel and the vast majority of the Jewish people around the world celebrate the reunification of the city of Jerusalem after the Six Day War.

It was six days of intense fighting where six countries joined forces with the declared objective of “wiping Israel off the map.” However, Israel prevailed and having taken control of the city of Jerusalem made a unique decision for the story of Jerusalem: respect all religions that coexist in the holy city.

During its long history, Jerusalem was destroyed at least twice, besieged t23 times, captured and recaptured 44 times, and attacked by enemy armies 52 times.

For years the Jewish people longed for a return to the holy city of Jerusalem. On each Pesach (Jewish Passover) we say, “Next year in Jerusalem,” in Jewish weddings the Jewish couple breaks a cup in commemoration of the destruction of the Temple of Jerusalem, the three daily Jewish prayers are with the eyes and the heart looking towards Jerusalem.

Nevertheless, it wasn’t until 1967 that Jews finally had access to their holiest site and could exercise their religious freedom.

All the foreign powers that occupied the city destroyed the places of worship of the preceding religions and erased all traces of alien culture.  Following that tradition, Jordan demolished between 1947 and 1967 dozens of synagogues in the old city of Jerusalem and prevented millions of Jews from around the world from accessing its holy site, the Western Wall.

After the Six Day War, Israel captured the Old City of Jerusalem. From then until today (to a greater or lesser extent) the policy is aimed at guaranteeing free access to all religions and respect for the right to freedom of religion of all its inhabitants.

Not only Jews can finally access the western  Wall after years of exile, but also Muslims can enter the Al Aqsa Mosque and Christians the Holy Sepulchre.  This is a status quo where all three religions keep their religious spaces free from interference.

The necessary condition for this status quo is Israeli sovereignty over Jerusalem.  No other country, state, kingdom, or empire has guaranteed freedom to all religions, only Israel.

But, what does all this have to do with Yom Yerushalayim?

That precisely there are those who try to undermine ​​Israeli sovereignty over Jerusalem.  Palestinian extremists encouraged by Hamas, Palestinian Islamic Jihad, and related terrorist organizations see Yom Yerushalaim and the celebrations as the perfect excuse to incite the masses against Israel and Israelis.

“Al Aqsa is in danger” is the most used slogan in recent decades.  However: has there been a substantial change in the status quo on the mosque?

The answer is no.  Consequently, the slogan is just a political use to incite hatred and bloodshed.  Those who use it are instigators and those who amplify it are accomplices.

That said, it is also true that during the Yom Yerushalaim celebrations, a minority of young Jewish nationalists feel entitled to shout “death to the Arabs” or provoke the Arab/Muslim inhabitants of Jerusalem.

That behavior is unacceptable.  It is a very dangerous hate speech for any democratic society and those young people who believe that with their fanaticism they strengthen Israel’s sovereignty should understand that on the contrary, they weaken it.

Israel’s sovereignty is based on Jewish and democratic values. As Jews we know what it means to be a minority in foreign countries, that is why it is imperative to respect minorities in Israel, the Jewish country.

At the same time, sovereignty not only implies the right of every state to decide its policies within its borders, but also the responsibility to protect all its inhabitants. In a liberal democracy, no hate speech should be acceptable, no matter the origin.

About the Author
Matias Sakkal is a lawyer specialized in international law and the Director of Con Israel y por la paz a public diplomacy project for the Spanish-speaking world.
Related Topics
Related Posts
Comments