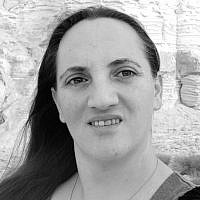 The Blogs
Leah Lotzim
Apply for a Blog
Please note that the posts on The Blogs are contributed by third parties. The opinions, facts and any media content in them are presented solely by the authors, and neither The Times of Israel nor its partners assume any responsibility for them. Please contact us in case of abuse. In case of abuse,
Report this post. 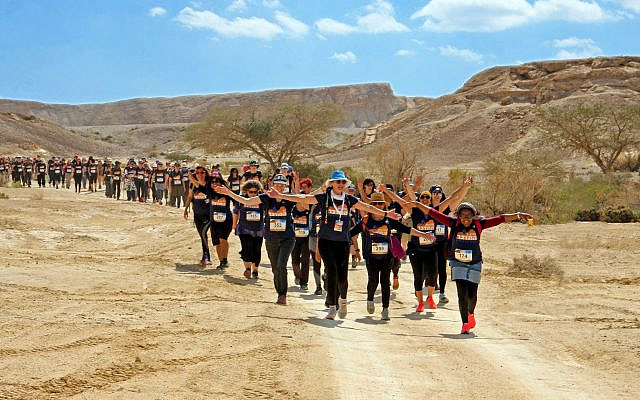 I remember standing on the stage last year at Eshet HaMidbar (in English, “Women Moving Mountains”), a two-day desert hike organized by the Yad La’isha Legal Aid Center in support of agunot, women whose husbands refuse to give them a get, a Jewish divorce. I asked for the microphone and recited out loud, “baruch matir assurot” (Blessed be He who releases the chained).  It was one day after I had finally, finally received my get, and I was overjoyed!

I felt as though I had been released from prison and was now as free as a bird. I felt surrounded by circles of joy. We had walked 18 kilometers through the Arava desert that day, during which I had keenly felt the physical and spiritual support of the other women participating in the hike. It was so powerful. We danced with joy and it was hard to believe that I had only just left a completely different type of circle.

Circle of Pain and Fear

I was imprisoned in a vicious circle with no way out. A cycle of violence, threats, ‘lectures’ about the justice of the path, and humiliation. I had a strong desire to fix things, to revive the love that we once shared. We were married for 21 years. Initially there had been no violence. It crept into our lives so slowly – rarely at first, and eventually on a daily basis. I now know that there were warning signals, but I didn’t see them flashing.

I was in a cycle of pain, physical pain, loss of control or anger that was unrelated to me but directed against me. A burning in my throat for a lost relationship, the pain and their marks that remained and reminded me of the pain even days later. And again I concealed and ‘forgot’, because you need to carry on. Before I received my get I wrote the following:

I want to hug the woman who wrote those lines, a woman who had very little hope, and I want to tell her that soon she will be free; there is hope. The hope began on the day that the circle was broken. He was violent again and was removed from our home. I was broken. And yet, I was able to touch the wounds, to listen, to hurt. I got up and dared to begin divorce proceedings.

I fought to survive. I had to support five children on a kindergarten teacher’s salary. To this day, he doesn’t pay child support. Within the commotion I suddenly realized that he was being represented by a savvy lawyer appointed by the State, while I was facing the system on my own, representing myself. The State did not provide me with representation as I had not been arrested for violence; I was merely a kindergarten teacher receiving an “outstanding” salary and therefore I could supposedly afford representation. I quaked with fear before every court appearance, as I felt I didn’t have the strength to face the system alone.

Once again I felt imprisoned within a circle. This time one of aginut, being chained to this nonexistent marriage. Once again I felt wounded and in pain when faced with a legal system. All my fears were being realized and my dignity was being trampled. I’m the one who needs to justify herself?

And this year, when I go on the Eshet HaMidbar desert hike, I will be a different Leah than the Leah that participated last year.

The Eshet HaMidbar hike, produced by Israel Marathon Corp, will take place in the Arava desert on February 20-21, 2020. It includes a challenging 24-kilometer hike marked by refreshment stations, accommodation at the Antelope Ranch, sumptuous meals, a performance by Israeli singer Ronit Shachar, evening discussion circles, camaraderie and more.
All proceeds from the hike go towards Ohr Torah Stone’s Yad La’isha to continue their work of freeing and empowering agunot.  Registration is closed, but you can still help them reach their goal: https://bit.ly/2HsYFOx 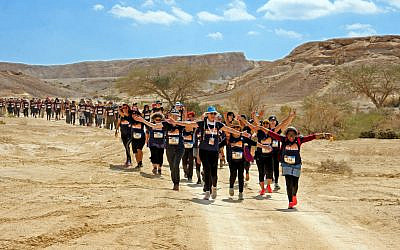 About the Author
The Eshet HaMidbar hike, produced by Israel Marathon Corp, will take place in the Arava desert on February 20-21, 2020. It includes a challenging 24-kilometer hike marked by refreshment stations, accommodation at the Antelope Ranch, sumptuous meals, a performance by Israeli singer Ronit Shachar, evening discussion circles, camaraderie and more. All proceeds from the hike go towards Ohr Torah Stone’s Yad La'isha to continue their work of freeing and empowering agunot. Registration is full, but you can still help them reach their goal: https://bit.ly/2HsYFOx
Related Topics
Related Posts
Comments