The Blogs
Mordechai Weiss
Apply for a Blog
Please note that the posts on The Blogs are contributed by third parties. The opinions, facts and any media content in them are presented solely by the authors, and neither The Times of Israel nor its partners assume any responsibility for them. Please contact us in case of abuse. In case of abuse,
Report this post.

In a few hours, thousands of Chabad Chasidim around the globe will commemorate the day known as “Yud Sh’vat” – The 10th day of the Hebrew month of Sh’vat. It was on this day some 70 years ago that the Chabad-Lubavitch movement came under the leadership of Rabbi Menachem Mendel Schneerson, of righteous memory.

Although Chasidim mark this occasion with numerous customs, such as visiting the gravesite of the Previous Rebbe, Rabbi Yosef Yitzchak Schneerson, of righteous memory, the occasion, in addition, has a very personal significance for me.

My father, Rabbi Meshulam Dov Weiss, ob”m, was a chosid of the Rebbe. It says so on his tombstone in Beit Shemesh. But my father’s connection to the Rebbe was something that evolved over time. My father’s background was quite non-Chabad. His grandfather was from Hungary, not exactly a hotbed of Chabad Chasidism. My father received his “S’micha” – Rabbinical ordination – from the Mirer Yeshiva in Brooklyn, most definitely not a place where Chabad teachings were necessarily popular.

But after getting married and moving to Miami Beach to serve the small Orthodox community back in the ’50s, my parents over the years moved closer and closer to the Chabad movement.

Which brings me to Yud Sh’vat. There were definitely some benefits for me being the oldest son. When I was only 11 years old my father decided to take me on a “pilgrimage” to the Rebbe in honor of Yud Sh’vat. It’s exactly 50 years ago when I boarded that Eastern Airlines flight from Miami with my father and flew into Kennedy on a cold, winter Friday.

Our first stop after arriving was joining the crowds at the gravesite of Rabbi Yosef Yitzchak Schneerson, buried not far from where my great-grandparents are also buried in the Old Montefiore Cemetery in Queens, New York. This was all very much for a young 11 year old from Miami Beach to take in, but it was only the beginning. From the cemetery, we drove to Crown Heights where we would be spending “Shabbos” and where I would enjoy my first ever kosher pizza! I got sick.

That entire “Shabbos” in Crown Heights was something quite different than anything I had ever experienced before. My father was a born and bred New Yorker, so for him, the experience of being around all those Chasidim and being in “770”, the world headquarters for Chabad, had some grounding. I on the other hand had been raised in a very, very different type of atmosphere. Miami Beach, especially back then, was no New York.

The highlight of that trip was when, together with my father, we had “Yechidus”, a personal audience with the Rebbe. Our appointment took place, as was typical, very late at night. We waited together with many others also waiting to see the Rebbe, just outside of the Rebbe’s office. Upon entering the Rebbe’s private office, my father handed a letter to the Rebbe who was sitting behind his desk. The Rebbe read the letter, making marks on the letter as he responded to whatever it was that my father had written.

The Rebbe then turned to me and asked me what I was learning in school.

When I think back to that moment now, I am so totally, totally amazed. The Lubavitcher Rebbe, unquestionably one of the greatest Jewish leaders of the 20th century. The urban legend is that back in the ’80s the Rebbe received second to the most (non-commercial) mail in all of New York State! People from all over the world, including important world leaders of all stripes, sought the Rebbe’s advice on all different matters such as health issues, economic issues as well as important issues pertaining to the world Jewish community. Every single day the Rebbe was responding to hundreds of individuals and meeting people late into the night.

And here it was, late in the night, with many more people still waiting to meet with the Rebbe, that the Rebbe thought it important to ask an 11-year-old boy from Miami Beach what he was studying in school!

After I responded, the Rebbe continued to question me on my studies until he asked a question I couldn’t answer.

“Who is your teacher?” the Rebbe asked.

“My father”, I answered.

My father bailed me out at the last second. “He didn’t learn it yet” he answered, and with that our audience was soon over.

What I also remember quite vividly from that late-night meeting was being “interrogated” by some very curious teenage Yeshiva students who wanted to know every single detail of our meeting. I tried to be accommodating.

A lot of water has gone under the bridge since then. I had the opportunity to meet with the Rebbe personally again over the years, the final time together with my bride-to-be about a decade later. As the Rebbe’s emissary in Bergen County, New Jersey for over two decades I had many an opportunity to communicate with the Rebbe.

But nothing can beat the impressions of a young 11-year-old. 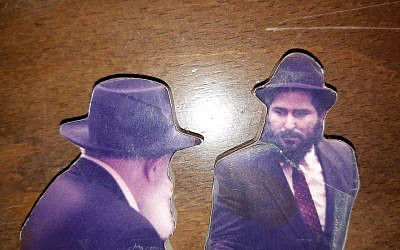 A one-on-one moment with the Rebbe. (courtesy)
About the Author
Rabbi Weiss was born in Miami Beach, Florida and served as Chabad community Rabbi in Teaneck, New Jersey for 21 years. He made Aliyah in July 2003 and is the author of "You Come For One Reason But Stay For Another." He is a licensed Tour Guide, father of 12, and resides in Mitzpeh Yericho.
Related Topics
Related Posts
Comments

‘They totally forget that he’s not real’
Joanne Palmer

All together now?
Larry Yudelson