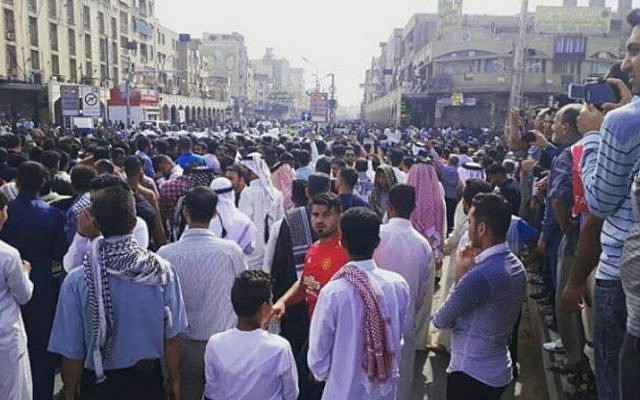 For the ninth consecutive day, Iran is witnessing nationwide demonstrations in protest at the killing of a 22-year-old Kurdish woman, Mahsa Amini, also known as Zhina or Jina Amini, who died in a Tehran hospital on 16 September of injuries sustained in a brutal attack the day before by the regime ‘morality police’, who had arrested her over her ‘improper veiling’.

Demonstrations have expanded across the country, including large cities such as Tehran, Mashhad, Shiraz, and Tabriz, after the first protests broke out in Mahsa Amini’s home city of Saqqez in Iranian Kurdistan. According to Iranian sources, more than 80 cities across Iran, including those in Kurdistan, Azerbaijan, Ahwaz, and Baluchistan, joined the mass protests.

Initially, the protests were restricted to condemnations of police brutality and violence against Mahsa Amini and other women in Iran. However, these protests quickly evolved into anti-regime demonstrations, with protesters chanting anti-regime slogans, particularly against the Supreme Leader Ali Khamenei. The brutality unleashed by police in response to these protests, with dozens of protesters killed so far, further ignited long-suppressed public anger across Iran, with protesters demanding the overthrow of the regime and insisting that the regime’s leaders be tried in international courts for crimes against humanity.

These protests in Iran are unsurprising to international observers, being only the latest in successive waves of anti-regime uprisings across the country, which have grown in frequency, size and scale since 2017. From December 2017 to January 2018, protests over regime brutality grew rapidly in the predominantly Arab Ahwaz region before spreading to other cities and regions nationwide. Another wave of protests broke out in November 2019, spreading across Iran, with some of the worst regime brutality in response seen in the Ahwaz region, especially in the port city of Ma’shour, where Iranian regime forces massacred peaceful Ahwazi Arab protesters in a frenzied bout of killing, burning some of the demonstrators alive; in all, 140 Ahwazi Arabs were killed by regime forces in Ma’shour and a total of 1,500 protesters killed by the regime across Iran according to Reuters.

Protests again erupted in July 2021 in Ahwaz, continuing for several days, with the Iranian regime deploying forces from the so-called Islamic Revolutionary Guards Corps (IRGC), along with its infamous plainclothes Basiji forces, as well as militias and tanks to suppress these demonstrations. The protests also quickly spread to other areas that rose in support of their Ahwazi people, with demonstrations in Tabriz and other parts of the South Azerbaijan region thwarting the regime’s plan to carry out more large-scale crimes against humanity in Ahwaz, as the Azerbaijani Turks stood firmly in support of the Ahwazi protests, leading to concerns among the regime leadership that such obvious carnage would stoke further anger and public unrest.

All this further confirms that the current protests roiling Iran following Mahsa Amini’s brutal killing, are not an anomaly, but the latest expression of rage against the regime’s systemic brutality, misogyny, injustice, tyranny, corruption and ethnic oppression. 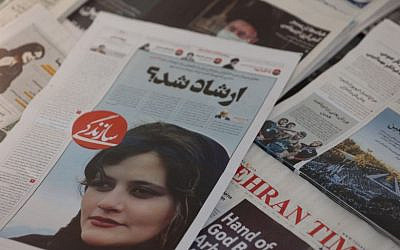 A newspaper with a cover picture of Mahsa Amini, a woman who died after being arrested by the Islamic republic’s “morality police” is seen in Tehran, Iran September 18, 2022. Majid Asgaripour/WANA (West Asia News Agency)

A point missed by many Western media and commenters, however, is that in addition to igniting anger among Iran’s women at the theocratic regime’s typically misogynistic brutality at any transgression of its ISIS-style repressive dress codes, this killing is also bound up with the regime’s persecution of non-Persian minorities, who suffer multiple layers of oppression, not only for dissent, gender or sect, but for their ethnicity; as a member of the Kurdish minority, Mahsa Amini was not only denied equality for her sex but for her Kurdish identity, with her parents revealing that even the name they chose for her at birth had to be changed to a Persian one ‘approved’ by the regime, Similar restrictions are applied on minorities’ dress, indigenous customs and language, which are outlawed.

The severity of the regime’s strictures can vary according to their usefulness in a given situation; during Ashura, for instance, ethnic minorities may dress as they wish, without the fear of arrest and torture for their traditional garb they’d usually be subjected to. Similarly, Ahwazi Arabs are allowed periodically to wear their traditional clothes for regime events, while no morality police harass female voters for ‘improper’ hijab at election time when they need every vote they can get, even from ‘improperly veiled’ women.

While Amnesty International has reported that around 30 protesters have been killed by regime security forces so far, Kurdish and Iranian human rights organisations report that the real number of victims exceeds 40. The Caspian region in northern Iran and the Kurdistan region tops the list of casualties, with reports indicating 18 deaths in the Caspian region – 11 in Amol, six in Babol and one in Anzali. In addition, 17 people were killed in the Kurdistan region of northwest Iran. The same sources also indicated that three protesters were killed in Tabriz, the capital of South Azerbaijan, one in North Khorasan, and another person in Karaj.

The current protests in Iran have become breaking news in international news agencies, especially in the West, as the world undoubtedly condemns the violations of Iran’s regime against the citizens. However, the treatment and type of condemnation vary according to the nature of the ruling parties in power in the United States and elsewhere in the West at a given moment; Conservative and Republican governments in Britain and the USA respectively take stricter positions towards the regime in Tehran. For example, in 2019, during the era of President Donald Trump, the United States demanded that the UN Security Council take immediate action to confront the Iranian regime. The US administration also imposed sanctions on the regime’s senior leaders on charges of committing crimes against humanity by killing protesters in Ma’shour city in the Ahwaz region and other parts of Iran.

While such restrictions are welcomed, they have very limited effectiveness in tackling the Iranian regime’s crimes against citizens; indeed, without any UN action, the regime acts largely with impunity, unleashing extreme violence to suppress any expression of dissent or peaceful protest, more especially against non-Persian minorities, with the Ahwazi Arab people being the most brutally targeted in recent years. Under Democrat administrations, Iran’s regime is even more emboldened, with the current and last Democrat presidents turning a blind eye to regime human rights abuses, being solely concerned with the completion of their ‘legacy deal’ nuclear agreement. At this point, Iranians and many others feel that human rights concerns over the regime’s murderous suppression of dissent have fallen victim to the myopic focus on the nuclear agreement by the Democrat administration in the USA and liberal governments in Europe.

While the current US administration has issued a statement condemning the Iranian regime’s suppression of protests – following days of protests over Mahsa Amini’s death – this is ineffectual verbiage and easily disregarded by the regime.

Given the regime’s increasing crackdown against protesters and dissidents, it is essential that a case to be brought against the regime leadership at the International Criminal Court in the Hague on charges of crimes against humanity committed not only against these protesters but against tens of thousands of other innocent people persecuted, imprisoned and too often killed for demanding the freedom and fundamental human rights guaranteed by the UN Declaration of Human Rights.

There is no doubt that if the United Nations Human Rights Council were to take its duties seriously and take real action against the regime, this would go some way to resolving major problems in Iran since the council has the authority to transfer the humanitarian file in Iran to the International Criminal Court to punish the criminals. Moreover, by forcing the Human Rights Council to take such action, the US government could stand for the timeless democratic values that the USA was built on upholding, rather than sacrificing human rights and human lives and losing the goodwill of millions of Iranians who put their faith in the USA for the sake of a nuclear agreement that Iran’s regime has no intention of honouring.

The main point of which Western observers must be aware is that many of the protests in Iran have begun in ethnic regions whose indigenous, culturally, and economically marginalised peoples are subject to additional forms of repression on the basis of their ethnicities, such as the Kurds, Balochis, Ahwazis and Azerbaijanis.

These ethnic minorities, which collectively make up around 70% of Iran’s population, account for the vast majority of political prisoners in the regime’s vast prison network and receive by far the largest number of death sentences due to their cultural activism and demands for a more representative and genuinely democratic decentralised political system.

These demonstrations also see a qualitative shift when women, doubly or even triply oppressed by Iran’s regime, on the basis of gender and ethnicity, as well as by its denial of civil rights, are at the forefront. These demonstrations have now reached the point of no return, with signs of an all-out revolution in Iran.

These are not simply demonstrations against the regime’s brutal oppression but the voices of people unwilling to tolerate further subjugation by a theocratic regime, demanding the end of the current totalitarian ruling system and the creation of a pluralist, decentralised, modern democratic civic state.