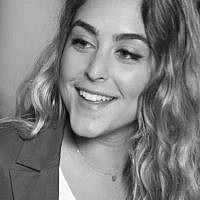 The Blogs
Noa Raman
Apply for a Blog
Please note that the posts on The Blogs are contributed by third parties. The opinions, facts and any media content in them are presented solely by the authors, and neither The Times of Israel nor its partners assume any responsibility for them. Please contact us in case of abuse. In case of abuse,
Report this post.

Recently, I was reminded of my time as a student when I ran into an old friend from college in Tel Aviv. He asked if I was still “involved with Israel and that religious stuff”. Although it has been years since I studied at my tiny liberal arts university in Portland, Oregon, hearing my friend’s comment took me back to the conversations I had on campus with students on the progressive left.

Many of these conversations were with peers that bandwagon on misconceptions regarding Israel and as soon as I mentioned an opinion outside of what was predetermined by them to be “okay”, we stopped talking about it. However, by not engaging in genuine dialogue, we perpetuate a vicious cycle of hate. While I am no longer a college student, I’m still deeply passionate about empowering student voices. Ironically, I happened to run into my old friend the evening before the start of the so-called “Israel Apartheid Week (IAW)”, a week-long global campaign of hate that dehumanizes Israelis and often seeks to intimidate Jewish students on campus.

A few years ago at Wits University in Johannesburg, South Africa, Jewish students faced Hitler salutes, graffiti stating “F**K SAUJS”, and “F**K Zionism”, and were told “I would love to kill you because Jews cause problems here” by other students. Now, a year into the pandemic, with university students learning virtually, online expressions of antisemitism have skyrocketed.

Today, I work for StandWithUs, an international non-profit organization that is dedicated to bringing Israel education to high schools, college campuses, and communities around the world. I have the privilege of overseeing StandWithUs’ South Africa chapter and working closely with the South African Union of Jewish Students (SAUJS). South African universities are often the epicenter for hatred towards Israel.

Prior to this year’s Israel Apartheid Week, SAUJS was proactive and did not wait for the hate to surface. The union is leading an incredible online campaign, focused on breaking down stereotypes of what it means to #OwnYourTruth. This is a three-week effort, dedicated to uniting students worldwide from all backgrounds towards education and owning your truth. SAUJS is taking a stand to redefine what Zionism is on campus, for students to reclaim their stories, and to expose the discriminatory Boycott, Divestment, and Sanctions (BDS) campaign against Israel. On campus, it is far too common that the anti-Israel voices get to determine what Zionism is on behalf of Jewish students without consulting them. It is the right of the Jewish students to define their own identity in the same way as every other group on campus.

Zionism is the fundamental and intrinsic right of the Jewish people to self-determine in their indigenous homeland.

Many college students in the US, South Africa and elsewhere care deeply about human rights and are conscious of the world we live in, both globally and locally. Anti-Israel groups often exploit these positive values as a way to isolate and ostracize Israel, and those who support its right to exist. As such, some students come to understand Israel through false or misleading narratives about the Jewish state. In order for us to overcome such misconceptions, we must be proactive.

In June, it will be three years since I moved to Israel.  I work professionally to educate students from around the world about Israel, including the Israeli-Palestinian conflict. Experiencing the daily reality of living in the heart of the conflict has led to more open and honest conversations. I talk to students from bomb shelters, historical sites, and security zones; which adds a tangible sense of reality to the conversation. We discuss the existential threats Israel faces and the personal stories of those who live in the region passed down from generation to generation; while in the places where history is unfolding, right in front of our eyes.

We may not be able to get through to the small, but shrill number of BDS activists, but when it comes to the rest of the population, we must listen to other people, engage in dialogue, and understand where they are coming from. We must put aside our egos, assume that the individual we are speaking to means well, and give respect. This is the only way to move forward as a people. The first step, which will is currently unfolding on campuses, is to #OwnYourTruth.

About the Author
Noa was born in San Francisco, California as a first-generation American to Israeli parents. Growing up in an immigrant family gave her a unique perspective and a strong family connection to Israel. Noa attended Lewis & Clark College in Portland, Oregon, where she studied International Affairs. She concentrated her coursework on the Middle East and received a research grant from her university to visit Israel and work on her thesis, titled: Causes of Territorial Disputes: How Uncertainty and Resources Contributed to the 1967 Six-Day War. June 2018 Noa made Aliyah by herself and joined the StandWithUs Israel team as the Director of International Delegations and Birthright Israel Collaboration Enhancement Program (BICEP). Since the pandemic Noa now is the Producer of StandWithUs.TV. Previous to moving to Israel she worked on StandWithUs' campus team for 3 years mentoring college students in the Northwest United States to advocate for Israel and combat Anti- Semitism. Today, she directs efforts to educate students about Israel’s true reality on the ground.
Related Topics
Related Posts
Comments