A line of about six extended from the register to the door of the coffeeshop, and I stood in it. He taking the money and those giving it were curtained by the face; I was naked from the neck up. The reaction I met with, however, was as though this were true of me from the neck down. “Mask, sir!” I was chided for mouth and nasal exposure in public. Not with the intent of adding personal offense to my lawful one, I could only smirk at this: Apart from those few standing in the line of which I was a part, I looked upon a room brimming with unmasked seated customers–chatting, champing, drinking, laughing, video conferencing, respirating–overall using their mouths in various and breathy ways. (Does this not sound unf-aeropress to you)? The aghast injunction was delivered anyway, as if I had lit up a cigar in synagogue on Saturday. The cashier brought up (unsmilingly — but I can only assume) from behind the counter a spare facemask and offered it me gratis. I strapped myself in. In line we stood, and on a stage stood we. Receiving my coffee but a moment after, I sat down, demasked, and drank it, without further issue or irony. I looked up. Another customer had walked in to join the line. “Mask, sir!” 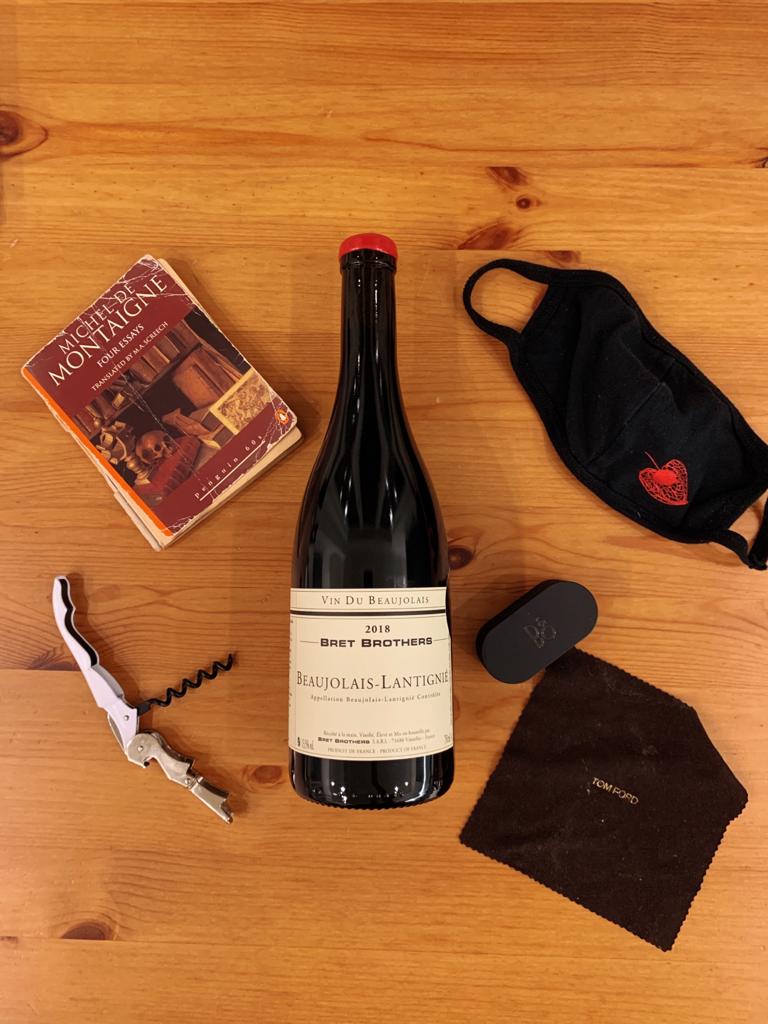 Essentials in the days of COVID. (courtesy)

I was traipsing the aisles of an Israeli organic grocery, (“Trader Josiah’s,” let’s call it), mooning, as idle shoppers do, about some such sublunary thing or other, when I was ground out of my reverie by a snappy voice: “Quick, shoter [officer]! Mask!” I nearly jumped for cover behind a box of sprouted granola (now with 30% more berries). I risked a cursory look from behind the corner of a shelf of herbal tea. A very exasperated customer was being ticketed by a very indifferent municipality officer for shopping indoors without a facemask. (Leaving the hapless hippie with two overpriced bills, which says something both of the fine and fine living. These grey days, living “green,” as it happens, requires green to begin with.) The mundane drama soon subsided and I fell back, with my fellow creatures, among the nut milks and powders and teas. Out the door I walked, feeling no rush of criminal delight at having outwitted the law.

Not long outside and I was approached by another brother from Gaia Mother, of the species h.[omeless] sapien sapien. Like those health-(higher) conscious customers inside, he was also, in his way, exercising a raw lifestyle. His haggard hand cupped for coin before him, he advanced well within the 2-meter mark delineated by the authorities. Needless bother ask him display a vaccination card. He was living the Diogenesian dream of a passportless world; the world was his home. Nonetheless, this man was homeless, though perhaps during these days of grammatical sensitivity we had better say “street-full.”  (The term is anyway not so facile; he and his kin are not just roofless, but rootless: There is all the metaphysical difference between houselessness and homelessness.)

He drew up near. I automatically reached for my mask, this time out of real concern, taking up my queue in this COVID comedy of errors.

Not infrequently have we been waylaid in this way while out of doors. Seated in the Carmel shuk, I recall being approached by a drugged-out, frigged-out, down-and-out prostitute, asking for money using a mouthful of surds and aspirants. My food had arrived the moment before, and would be sent back the moment after. I replied negatively with a left-right of the head, which evidently offended the amour-propre of my unbidden table partner. I was subsequently shouted down as a son of a whore, a sharmuta, among other inguinal-themed epithets. I was however at the time more concerned with the covering of my eyes and nose than ears.

Most beggars perch their cardboard nest at commercial thoroughfares — just outside the entrances to supermarkets, cafes, ATMs, banks, etc.— where the human gales blow past. They display for the morbid visage wide puckering gashes and lesions, spumy mouths, and ballooning limbs, like moist and decaying logs. I retain one troubling image of a man in a bizarrely contorted position perforating his skin with a razor outside an Allenby A.M.-P.M. supermarket. Allen-by-your-leave. This weird, macabre circus goes on all day, as it has been for years, at public nexuses and bystreets in the south of the city.

The catalysts and solutions of the homeless ‘problem’ are not what I wish here to dwell upon (so to speak). Given the puritanical preoccupation over oral exposure in public, it is — at the least — ironic, and — for the most part — hypocritical, that those exposing all manner of infections should be regarded so unconcernedly, or disregarded withal. If one were being proportionate then what is under regular conditions considered a homeless ‘problem’ should ipso facto be treated like a national crisis. But the question of why a bureaucrat would find the most persnickety channels by which to tax labourers, while paying scant concern to the those without an I.D., let alone a wallet, is one you can answer for yourself.

Pardon the tautology, but either we are in an emergency, for which the temporary imposition of stringent measures can at least be comprehended, or we ain’t. Either take money from those not wearing a mask for endangering the public safety, while making simultaneously the effort to help those who endanger it the more, or let all of us alone. If it is obvious that vaccinated, unmasked patrons of health food stores can be considered threatening enough for legal reply, than it is no less obvious that the federal logic demands the wretched of the paved earth be given some form of isolated communal succor– for the ‘the public’s protection’, as it goes, as well their own. But, obviously, once political consequences are considered, this becomes less obvious. And nothing is so obvious as that.

We look with anticipation to the day when we can fling off our masks like a liberated feminist casts her bra to the wind. But looking forward becomes exasperating when what we look forward to should have already been behind us to look back upon. In the meantime, we will continue to play this senseless children’s game of half-face peek-a-boo with our health inspectors.

On the theme of governmental ineptitude I submit but one more tale, this last unrelated to Corona, but to the global and hereditary pandemic of human Stupidity and Folly, for which there is no vaccine save that one which inoculates us from all life’s ills.

Briefly, then. (Extensively, upcoming in these pages.) Again at the shuk, before me was a sheaf of dates, still on their stem, and next to these, dates in a box. But affixed to the boxed version was an unsightly red sticker which showed an intimidating pictograph of a spoon heaped with sugar, made explicit with the words ‘high in sugar’ written underneath. Even one of the holy species evidently needs qualification by the omniscient and supernal bureaucratic inspector. This is not an effort toward ‘health-consciousness’ — there is nothing cognitive about it. Just one of the ironies of this was that this warning superimposed itself over the box’s print which certified by another — or perhaps the very same — bureaucratic agency, that the food within was organic, bio, and made of 100% Israeli medjul dates with “no added sugar.” No spoons, like that defacing the product, were involved. (But the picture of one adds the impression that processed sugar was added to what sugar naturally develops during the ripening of this very salubrious and very delicious Mediterranean fruit.) That old milk and honey description of the Holy Land seems to be in need of modifying too, then; but then, “The land of milk (contains lactose; high in fat) and honey (high in sugar)” looks a trifle chunky on tourist brochures.

My opinion also comes with no added sugar. When the government begins to play personal nutritionist, you can add dyspepsia to the usual headache.