Ramallah, May 10 – In an attempt to break an impasse of more than a year in Israeli-Palestinian final status talks, Palestinian Authority President and PLO Chairman Mahmoud Abbas departed from precedent and proposed his own settlement, under which the two sides would flip a coin to determine who must make concessions on a given point of contention. Under the terms, if the coin comes up heads, the Palestinian side wins, and Israel must make a concession, whereas if it comes up tails, the Israeli side loses, and the Palestinians may extract a concession from them.

Israel and the PLO remain far apart on such troublesome issues as a right of return for the descendants of Palestinian refugees from the 1948 conflict; the status of Jerusalem, especially the eastern section; the fate of existing Jewish settlements in what would eventually become the State of Palestine; borders; territorial contiguity; and the extent to which the emerging Palestinian state would have a military. 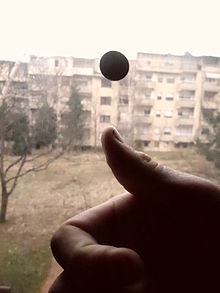 Under Abbas’s proposed negotiation framework, each of the aforementioned sticking points would be subject to a coin-toss, instead of the protracted, inconclusive, and acrimonious negotiations that have characterized Israeli-Palestinian talks for the last several years – when they have taken place at all. Negotiators for the two sides have not met in more than a year, with each blaming the other for the breakdown and continued intransigence.

The advantage of the coin-toss format, says expert Nathan Detroit, is that it offers a shortcut and a way to save face. “Once negotiators have staked out a position on something, softening or abandoning that position is basically an invitation to the opponent to make further demands, since it smacks of weakness. Abbas’s heads-we-win-tails-you-lose format has an element of genius in it, in that it allows the negotiators to blame the coin and not come off as having given away too much in an attempt to reach agreement.”

Abbas presented the terms to US Secretary of State John Kerry today, who praised the Palestinian leader’s initiative and flexibility. “President Obama has been saying for a long time that the impasse in Israeli-Palestinian talks is a key element – perhaps the only element – in the radicalization of an entire generation of Muslims in the Middle East,” he said. “We applaud President Abbas’s renewed vigor in tackling the most intractable areas of remaining disagreement.”

“Now the ball is in Netanyahu’s court,” noted US State Department spokeswoman Marie Arfe. “We expect some positive response to this initiative of Mr. Abbas, especially considering the political risk it involves for him.”