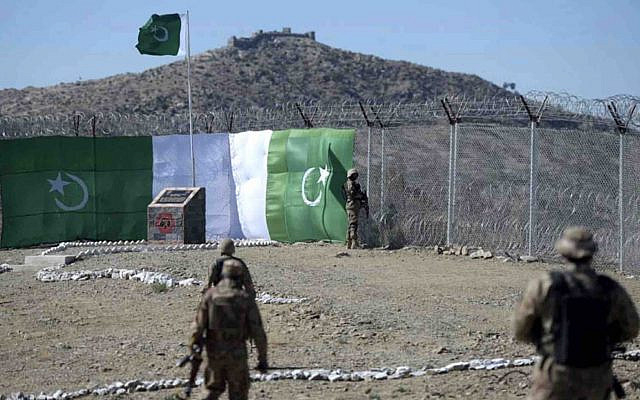 Moed Yusuf, Pakistan’s National Security Advisor, has had a few tough days on Afghanistan recently. He had to cancel his trip to Kabul scheduled for the 18th of January, which then was rescheduled for yesterday. Angered by Pakistan’s duplicitous role in appearing as a saviour of Afghanistan,  as it persists in backing the authoritarian Taliban regime, the protestors wanted to show the mirror to Yusuf. There is severe discomfort and contradiction in Pakistan now on dealing with the Afghanistan and the Taliban, despite supporting them for decades.

A key area where this is reflected is the Durand line—the 2640-km long borderline which divides Pakistan and Afghanistan, but more importantly, separates the Pashtuns, drawing a line through the fabled Pashtunistan and dividing the Pashtuns into two countries.  This has proved to be one of the most contentious issues between the two countries: while Pakistan is keen to assert the line’s formality, successive Afghan governments (including the Taliban regime in its previous avatar in the 1990s) have refused to recognise this artificial line. They have perceived this line as an attempt to quell Pashtun nationalism, the most dominant tribe in the Afghanistan-Pakistan border area. The taliban is ethnically Pashtun, so the importance of a Pashtun homeland is probably more important than the control of ethnically diverse areas of Afghanistan.

For Islamabad and Rawalpindi, this ethnicity-based Pashtun nationalism focused on loyalty to the clan is problematic because it contradicts religion-based Pakistani nationalism-a ethnic Pakistani-Punjabi narrative. More fundamentally, it also challenges the very raison d’être for the creation of Pakistan from India in 1947. This also acts as a catalyst for other bourgeoning separatist movements, including the Baloch population, thereby directly threatening Pakistan’s territorial integrity.

Driven by this logic, Pakistan has been making efforts to fence this border in recent years, with such efforts gathering pace in 2017 as part of its ‘counter-terrorism’ operations. While the then Afghan government (the Ashraf Ghani government) protested these actions, it did not actively resist them.

After a human rights movement, Pashtun Tahaffuz Movement (PTM), gathered steam in 2018, Pakistan intensified its efforts. The PTM highlighted the flagrant human rights violations committed by the Pakistani Army during its counter-terrorism operations in the Federally Administered Tribal Areas (FATA), a former semi-autonomous territory, merged later with the Khyber Pakhtunkhwa province. The Pakistani establishment was spooked by the possibility of traction PTM may give to Pashtun nationalism. Subsequently, Pakistan claimed to have completed fencing more than 90% of the line.

However, the Afghan Taliban has now decided to stand up to Pakistan’s actions, with multiple incidents being reported of Taliban soldiers clashing with Pakistani Army soldiers engaged in fencing work. In one such incident, on December 23, 2021, the Afghan defence ministry asserted that Taliban forces deployed at the Durand Line had stopped the Pakistani soldiers from carrying out the fencing work. A viral video showed Taliban soldiers across the line in the Bajaur area seizing spools of barbed wire and one senior official asking Pakistani soldiers stationed in security posts in the distance not to try to fence the border again. Both the forces then reportedly exchanged fire. Interestingly, this incident happened the day when delegates of the Organisation of Islamic Cooperation had gathered in Islamabad to discuss Afghanistan’s humanitarian crisis since the Taliban takeover in August 2021.

Pakistan has tried to downplay these incidents as ‘localised situations.’ Still, the clashes and strong rebuttals coming from the Taliban suggest that this issue will remain alive for days to come. Already, Mawllawi Sanaullah Sangin, commander of the border forces for the eastern zone, has declared that the Taliban regime will not allow fencing on the Durand Line in any form. Moreover, the Taliban is building more than 30 outposts to prevent the movement of Pakistani soldiers.

But Pakistan is determined to push with its fencing activities and has used every argument to coerce the Taliban. For example, when it could not convince some Taliban leaders with its plans, it shut down the Chaman border in September 2021—the second-largest border checkpoint for trade and people’s movement between the two countries. This border closure only worsened Afghanistan’s humanitarian crisis as millions of people went without food and other essential supplies. There are also reports that the Pakistani Army is believed to have entered into a ‘secret deal’ with ‘friendly’ groups within the Afghan Taliban ruling Afghanistan over the Durand Line fencing project.

Moeed Yusuf was scheduled to discuss the issues related to border-fencing, but clearly, the Pakistani establishment had not considered the extent of resentment within the Taliban over this issue.

The Durand Line issue is expected to be a constant irritant between the two countries in the coming days. The Pakistani Army may have bought over the top Taliban leadership over the issue, but the situation on the ground is telling a different story. Local tribes like Noorzais, Achakzais, and Shinwaris, which have inhabited the border region for centuries, will strongly resist any such agreement. Unlike the generals sitting in Rawalpindi and leaders enthroned in Kabul, these tribes have family, business, trade, and property linkages crisscrossing the Durand Line. So they have a strong interest in upholding those ties and, therefore, will push back against the Pakistani moves.

So even as Pakistan wants to fence the border to contain Pashtun nationalist sentiments, its very actions may end up acting as a catalyst for those sentiments to revive strengthening the movement for a united Pashtun homeland.