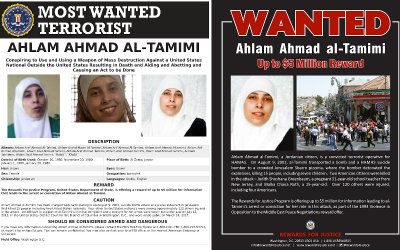 The “reward” and “wanted” posters for Ahlam Tamimi, issued by the Department of Justice and the State Department respectively

Recent blatant discrimination against our murdered Jewish child, Malki Roth, is a hard pill to swallow.

First came the preferential treatment of the Abu Akleh family which was granted a private meeting with U.S. Secretary of State Antony Blinken in Washington. The latter followed that up with a phone call to Israeli Defense Minister Benny Gantz on Saturday to pressure him to publicize the conclusions of Israel’s investigation into Shireen Abu Akleh’s killing. And to do so asap!

On the heels of those attempts to appease Palestinian supporters came the assassination of Ayman al-Zawahiri. In its wake, President Biden’s speech was replete with assurances regarding his administration’s commitment to eliminate terrorists.

But they rang hollow for us. We heard him declare:

The United States continues to demonstrate our resolve and our capacity to defend the American people against those who seek to do us harm. You know, we – we make it clear again tonight that no matter how long it takes, no matter where you hide, if you are a threat to our people, the United States will find you and take you out.

Where is that resolve vis a vis Ahlam Tamimi? Why isn’t the President determined to defend Americans from her incitement to terror and to bring her to justice for the murders she has committed?

Tamimi need not be found – because she isn’t hiding. The regime granting her refuge – the Hashemite Kingdom of Jordan – has a valid extradition treaty with the U.S. and is a revered ally.

In fact, there is a State Department reward of $5 million for Tamimi’s capture. She has been indicted by the Department of Justice and her extradition has been formally demanded. The pieces are all in place for justice to happen.

What is the obstacle?

The many excuses we have been fed by politicians and other influencers are patently just that: excuses.

From “But Jordan’s ‘King’ would be overthrown” to “the Middle East would implode” to “Israel doesn’t want her to be extradited“. The excuses are numerous, lame and disingenuous.

So what is the real reason that nobody wants to see our child’s murderer, a mass murderer, self-admitted, brought to justice?

We have our conjectures. And they don’t speak well for the values and morality of the politicians we confront on both sides of the aisle.

About the Author
A Jerusalem-based freelance writer, law graduate and commentator on the challenges facing people with special needs, Frimet Roth together with her husband Arnold co-founded The Malki Foundation (www.kerenmalki.org) in 2001. It provides concrete support for Israeli families of all faiths who care at home for a special-needs child. The Roths' daughter Malki was murdered at the age of 15 in the terrorist bombing of the Sbarro pizzeria. Her personal blog, under the title "The Good, The Bad, The Ugly", is at http://frimetgbu.blogspot.com The views expressed here are personal.
Related Topics
Related Posts