About 15 years ago, a prominent rabbi spoke in Passaic and said he had written a paper about Jewish marriage and divorce issues that he felt was rock solid but quite revolutionary. He thought it was so revolutionary that he would wait 20 years to publish it.

Rabbi Eliezer Berkovits was one of the greatest rabbinic minds of the 20th century. He first published his remarkable work Jewish Women in Time and Torah in 1990, two years before his death. As to the book, I’d humbly suggest it was 50 years ahead of its time.

Just republished by Urim Publications, Jewish Women in Time and Torah is a fascinating and, at times, uncomfortable read. People write about what bothers them, and Berkovits was troubled by what he saw as a lack of full rights for women in traditional Judaism. 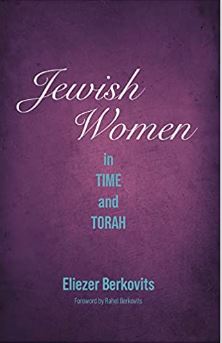 One of the most, if not most, vexing issues surrounding women and halacha today is that of the agunah. An agunah is a Jewish woman stuck in her halachic marriage with no recourse. Berkovits, once again ahead of his time, tried to find a solution to the agunah problem and wrote in 1967 Tenai b’Nissuin u’veGet (Conditionality in marriage and divorce). The approach of Tenai b’Nissuin u’veGet was rejected by most in the right-wing and even modern-modern Orthodox world, and it never took hold. Such that when you read about the work, the term controversial will inevitably follow.

There are several Talmudic observations Berkovits quotes that he feels need to be eliminated to ensure women have proper and adequate rights today. Be in the quotes that denigrate women’s intellectual capabilities or the observation in Yoma 66b that “there is no wisdom in a woman except weaving with a spindle.” He writes that a woman’s knowledge only extends to a spindle that might have applied in a society that provided women with only a limited education – but that does not hold today.

A similar law he takes umbrage with is Maimonides’s observation that a husband should prevent a wife from leaving home more than once or twice a month. He writes that he doubts a single religious family today conducts itself like that. In our times, he notes that such a rule would turn the home into a prison for the wife.

Rabbi Aharon Lichtenstein observed that halacha prefers evolution over revolution. Much of what Rabbi Berkovits suggests in this brilliant work would be viewed by many as a profound revolution.

There are Google poskim who think they can find answers to tough questions. Berkovits wouldn’t need Google as he knew it all. He writes of the early rabbis, whom he viewed as courageous, who used halacha’s power and inherent flexibility to adapt to modern times. From Zelophehad’s daughters to modifications of a woman’s kesuva and more. But for many halachic decision makers, using terms such as flexibility and emendation when referring to halacha is enough to make them apoplectic.

It’s critical to reiterate that nothing Berkovits wrote here contradicts traditional halacha. He had an absolute dedication and was utterly subservient to Jewish law. Albeit, some who read his approach may say that it smacks of Reform Judaism. But Berkovits is undoubtedly in good company in that some of the more radical approaches that the Chazon Ish took found him being accused of being too liberal.

Urim Publications certainly deserves significant credit for republishing this important and timely work. Albeit that some will find it untimely. And for those, they can wait until it is reprinted again in 2042 when observers will say how ahead of his time Rabbi Eliezer Berkovits was.