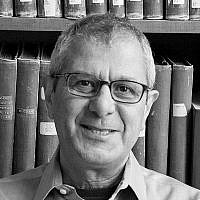 The Blogs
Yoram Meital
Apply for a Blog
Please note that the posts on The Blogs are contributed by third parties. The opinions, facts and any media content in them are presented solely by the authors, and neither The Times of Israel nor its partners assume any responsibility for them. Please contact us in case of abuse. In case of abuse,
Report this post.

Israel’s Iron Dome is a very sophisticated system, but it cannot guarantee complete interception of rocket fire from the Gaza Strip.

The effectiveness of Iron Dome decreases as the number of missiles handled by the system is greater.

In other words, if several missiles are fired, the system’s success rate is high compared with the firing of dozens of missiles at the same time.

Operational malfunctions are an integral part of activities such as those that took place in the Gaza Strip a few days ago.

The activity of special forces was not stopped following operations that failed in the past, and it is likely that this will be the case this time too.

In  a reality where there is no agreement on a ceasefire and there is no guarantee of its continuation, the situation between the rival sides will continue to be fragile.

The situation between Israel and the Palestinians, not just Hamas, is very fragile. The sides are on the edge of an abyss.

The leaderships of Israel and Hamas are not interested in reaching a war, although each side has elements that support a full-fledged military confrontation already.

Diffusing the conflict is highly complex as the two parties are not interested in the war now, but both sides are holding demands that prevent a ceasefire that can last a long time.

In other words, even if the current cycle of violence is halted by Egyptian and international mediation, the conditions that cause the conflict continue, and, unfortunately, the renewal of violence and perhaps a deterioration into a broad military confrontation may only be a matter of time.

Listen to this week’s episode of the Jewish Views podcast!