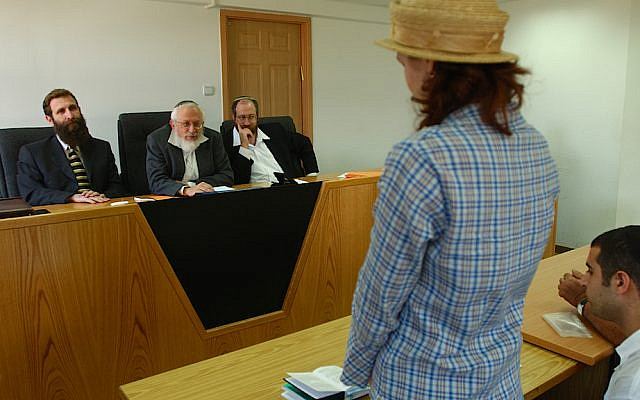 Last week, in a seminal article of critical importance, Rabbi Leonard Matanky, representing the major Centrist Orthodox organizations in North America, explained how the conversion reforms introduced by Matan Kahana, Minister of Religious Services, would substantially jeopardize Orthodox/halachic conversion standards, cause massive schism in Jewry and set back the conversion system to its chaotic state of decades ago. The article was written in a sensitive, respectful and level-headed manner, elaborating on the quite serious risks of decentralized conversion and the negative consequences for both Jews committed to Halacha as well as for the larger Jewish population. Please read the article; it articulates the issues really well.

In an attempted rebuttal that is disparaging and is truly confusing from an Orthodox perspective, Rabbi Hayim Leiter makes assertions about conversion and about Rabbi Matanky’s article that are wholly implausible and downright untrue. Let’s take a look, as readers are being seriously misled by Rabbi Leiter’s article, which is a Featured Post and has received enough clicks to now be in the Popular category.

The Shulchan Aruch/Code of Jewish Law (Yoreh Deah 268) clearly stipulates that according to Halacha, a convert must accept the Commandments as a central part of his conversion. The main concern about decentralized conversion is indeed that some conversion courts do not adequately assure that prospective converts accept the Commandments and seriously commit to halachic observance. This is a legitimate concern.

It is thus very surprising that Rabbi Leiter, writing as an Orthodox rabbi, omits this elephant in the room and insists that conversions that do not meet halachic standards should be recognized:

Matanky’s claim is that the decentralization of conversion will lead to a lack of universal standards and thus a lack of trust in the conversion process. He claims that GPS conversions done in America are standardized and therefore produce universally accepted converts, and he wants it to remain that way both in the US and in Israel. Additionally, he claims to be concerned about the problems we face in Israel, but this seems nothing more than lip service.

(W)e must follow Halacha as it has been handed down for 2,000 years. Our Sages Hazal were clear that the only thing needed to convert someone was a religious court of three men. The process was always decentralized. It is only in the modern era that these religiopolitical bodies came into being. Those advocating for centralization are actually the reformers. They are the ones bucking the established custom.

Due to the modern state of the Jewish people, it is true decentralization would make things more complicated. And there might be a greater possibility of courts performing conversions that aren’t up to Orthodox standards. But it’s time for all of the streams of Judaism to be represented in Israel. The State needs to recognize the services performed by both the liberal and traditional movements – be it conversions, weddings or britot. The power should no longer be solely in the hands of the Rabbanut.

Maybe I am missing something, but we have here an Orthodox rabbi who is arguing for the acceptance of non-halachic conversions, apparently unfazed by the consequences.

Rabbi Leiter then outrageously avers that Rabbi Matanky and the entire leadership of American Centrist Orthodoxy have nefarious, self-serving motives:

The only reason to keep these things centralized and standardized is a desire to remain in power and also to render the other movements invalid.

On the contrary, it is these rabbis’ concern for the unquestionable Jewish status of their fellow brothers and sisters and a quest to prevent schism between us all that decentralized (read unregulated and chaotic) conversion is being opposed.

Rabbi Leiter also argues that conversion standards need to be reformed in order to accommodate the close to half a million “Jew-ish” Israelis who are not halachically Jewish. Aside from the fact that introducing standards that are halachically problematic will by definition not create halachic Jews, thereby creating an even bigger problem, the truth is that the vast majority of these Israelis, who hail from the former USSR, have no interest in conversion by any standard. Many of them consider themselves Christian and attend church, and the bulk of these non-Jewish immigrants are not at all seeking to convert with lessened requirements; they are happy to remain as they are – thereby assuring that the problem of half a million non-Jewish “Jew-ish” Israelis be perpetuated.

The only solution for those committed to Halacha is halachic conversion by a standard that meets the consensus of preeminent halachic authorities. The best path for this at present is that of the Rabbanut, the Chief Rabbinate.

No favor is being done for the Jewish People nor for prospective converts by introducing standards that will bring Jewish status into question. It is extremely perplexing to read arguments of those who claim fealty to Halacha claiming the reverse.