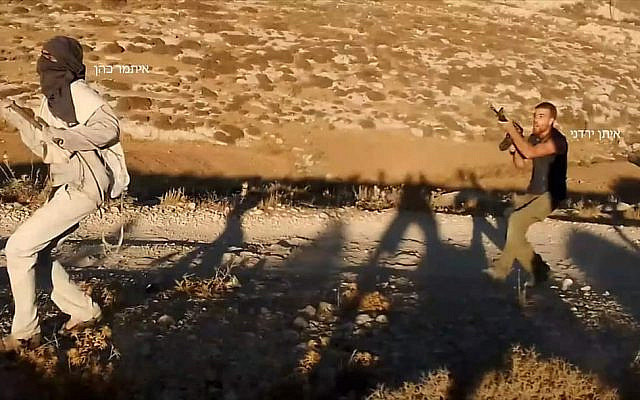 From Facebook of Yuval Avraham: Attackers From Khavat Maon on Tawaneh Land This Week (intended for public use)

While the to be condemned terror attack near the Carmel settlement last night made immediate headlines in Israel, and the settler narrative of the “Palestinian lynch” on Monday was also widely and quickly publicized without properly investigating the facts, it was only yesterday that the Israeli press covered video footage revealing a much different version of events. Two settlers, one masked and wielding an iron bar, and the second toting a gun and wearing army pants, came from the Khavat Maon outpost to where Tawaneh residents were working their lands. No mob of thirty Palestinians attacking. Portions of the 23 minute film delivered to the police have finally been covered in the press, including TOI. While I wish that the settler attacker Itamar Cohen recovers from his injuries, I also want him to be prosecuted for his actions. And, I also wish a speedy recovery to Hafez. Despite the fact that the secret truth of what happened has been at least partially revealed, he is still recovering from his injuries while imprisoned as the accused attacker.

I will write more about this week’s Torah portion in a bit, and the lists of behaviors seen as cursed. For now, let me say that the portion deals with evil that is done secretly. While only two of the list of forbidden behaviors explicitly contain a prohibition against carrying them out in secret (Setting up a forbidden image for idolatry and striking one’s fellow), Rabbi Shmuel Feilchenfeldt (Beit Shmuel Aharon – 1914) writes that all eleven cursed actions are written explicitly against those who hypocritically carry them out secretly. Ibn Ezra makes this same point, and Rabbi Shimshon Rafael Hirsch writes on this at even greater length.

Throughout the world human rights are often violated in secret, and the definition of “secret” must include a broad range of methodologies. It is not only about events or actions totally unknown.

While not new, I have noticed an increase in recent incidents in which settlers attack Palestinians, and then claim that Palestinians attacked them. All too often, Israeli security forces participate in this cover up, and all too often the press follows along, or keeps the public in the dark by determining human rights violations as “not newsworthy.” Coverups and misrepresentations and failure to report are also forms of creating and maintaining secrets. When Hafez was struck, there were plenty of witnesses. It wasn’t secret in the sense that nobody saw. However, an attempt was made to keep the truth secret.

Our Torah portion Ki Tavo opens with the first fruits ceremony that was incorporated into the Shavuot holiday and with language also incorporated into the Passover Haggadah. It is followed by the above mentioned series of actions that will curse those who carry engage in them. Among them are “Cursed be the one who removes his/her neighbor’s landmark” (Deuteronomy 27:17), “Cursed be the one who misdirects the blind on the way” ( 27:18) “Cursed be the one who subverts the rights of the stranger/non-Jew living among you, the orphan and the widow (27:19), and “Cursed be the one who strikes his fellow in secret” (27:24). The list of cursed actions is followed by a brief list of blessings that God will bestow upon us if we obey God’s commandments, and a much longer and awful list of curses that God will bring upon us if we do not heed God. In a ceremony to be carried out when we first entered the Land, half the tribes were to pronounce the blessings on Mt Gerizim, and the other half were to utter the curses on Mt. Ebal.

I will get back to secrets in a moment. However, I must mention that it is more than ironic that Mt. Gerizim is now the location of the Har Brakha settlement and Giva Ronen outpost wreaking curses on the Palestinian residents of Burin below her. This subversion of the rights of the non-Jews living among us came into the light briefly after the attack on Israelis assisting in the planting of olive trees in January, but it has been going on for years in the dark day after day. The Burin residents living directly under Har Gerizim constantly suffer from settlers descending to throw rocks on their homes, burn their fields and trees, and even entering their homes to attack. The have been desperately trying to raise funds to build a wall between them and their oppressors. The ultimate goal is dispossession. On both sides of the 1967 border, the Jewish State is secretly and openly eliminating landmarks and barriers to the takeover of the property of non-Jews. I don’t believe that God wants or permits us to be the agents bringing upon non-Jews the very curses we dread.

When our Torah portion forbids the misleading of the blind, our sages believed that the prohibition does not only refer to the physically blind. They understood this as referring to taking advantage of a person’s weaknesses and/or ignorance. Rashi comments: “This means: one who is blind (inexperienced) in a matter and one gives him/her bad advice.” We know that the public is frequently given a false or misleading narrative. Human rights defenders who expose these “dirty secrets” such as the almost daily events in the South Hebron Hills or Burin are seen as traitors. Even this week, those who were present and eventually succeeded in bringing the secrets into the light of day have been vilified by all too many.

Now, for a brief moment, a bit of light has been shined on the South Hebron Hills. But, this is not the first time there has been a bit of light. Last Simkhat Torah, a settler pogrom received publicity. However, the daily realities quickly reverted to secrets in the dark. The violence and oppression of the residents of the South Hebron Hills has been aided and abetted by the High Court decision green lighting their eviction from their homes. Soldiers and settlers subverting the rights of the residents are just moving forward what the law says can eventually happen. Even after the video was revealed, the injured Palestinian whom I have known for over 20 years, is imprisoned and accused of attempted murder, while the attackers are free. While there can always be a facet of somebody’s personality I don’t know, as well as I think I know him or her, I have known Hafez as a non-violent person. He and his family have often been the victims of violence. Almost every day this week there has been another incident. One night soldiers and civilians invaded the courtyard of a family at 1:30 am, for a “lecture” on the ancient synagogue there. Yesterday another farmer was detained for no apparent reason while working his land, and the Israeli activist who documented was detained for “insulting a public official.” His phone was temporarily confiscated. For several days the army stopped the accompaniment of school children that was initiated almost 20 years ago because the children were being attacked by settlers that came out of the forest with baseball bats….

Let me conclude with the words of Rabbi Hirsch:

“All blessing is denied to the one who outwardly plays the pious person devoted to God but in secret denies the exclusive existence of one God and God’s rule; who outwardly is respectful to his/her parents but inwardly considers him/herself vastly superior to them; who in the eyes of others preserves the reputation of an honest person, but, where unobserved, does not hesitate to injure the right of his/her neighbor to his/her own advantage; who is full of enthusiasm for the welfare of his/her fellows, in the presence of clever and intelligent people, but pushes short-sighted and blind people into misfortune; who grovels before the powerful, but denies the weak and helpless their rights; pretends to be a highly respectable member of society, to wallow in sexual licentiousness in intimate privacy; who does not dig a dagger into his/her neighbor, but under the cloak of conversation, murders his/her happiness, his/her peace and his/her honor; who enjoys the highest confidence in his community but misuses it in secret corruption; finally, also one who, even if he/he lives correctly and dutifully for him/herself, still looks with indifference on the abandonment of the duties of the Torah in his immediate and wider circles.”

If we in a way believe in the idea that we are to be a “light onto the nations,” let us start by being a light onto ourselves. Let us not merely see the cursed actions in our Torah portion as prohibitions against the secret actions of individuals, but see as one of our most important Torah duties the obligation shine light where nasty secrets, half-truths, disinformation, and the resulting injustices are thriving in the dark.