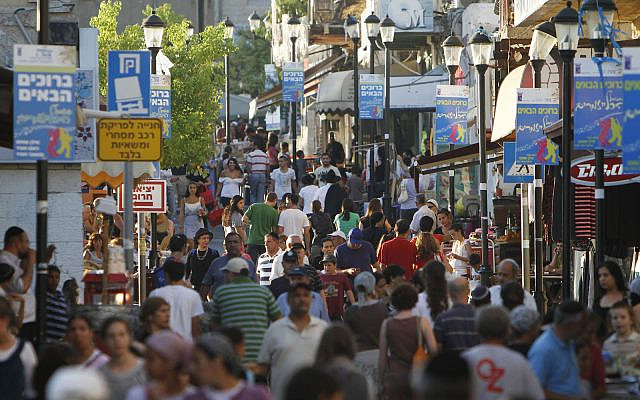 Lately, while reading progressive newspapers and serious magazine articles, a new claim has appeared: the world has to reduce its population numbers in order to survive. Israel too. Moreover, increasing numbers of interviews and personal essays in Israel have highlighted women (especially) who have decided “not to have children at all” – some for career reasons, more for “Israel is running out of room” and “I don’t want to bring children into a world of misery.”

Let it be said here from the outset that global warming and environmental damage are very serious problems for the world in general and Israel too. Indeed, climate scientists have warned that countries like Israel will suffer even more from global warming than others, given its geographical location. I have already “vented” in these pages about the lack of Israeli government planning in this regard.

In addition, Israel suffers from a problem that many other countries don’t have to the same extent: lack of living space. Indeed, if more government resources were transferred from the soon-to-be-unlivable Negev to the relatively mild Galilee in the north, that would reduce living acreage even more – not to mention overloading the only truly green region in the country. So, there is no doubt that the country is in a quandary.

Does this mean that the ZPG (Zero Population Growth) – or more extreme NPG (Negative Population Growth) – pundits are right? Not at all. First of all, from a global standpoint, Israel’s population is a drop in the bucket. Moreover, around 2050-2060 the world’s overall population numbers will start to decline! Some countries have already started on this downward slide: Russia, Japan, Portugal – and many others (China, most of Europe) are not far behind.

Second, the naysaying Cassandras (of every generation) tend to completely disregard original solutions that human ingenuity – driven by economic necessity – comes up with to resolve “existential” problems. The reason for such future myopia is clear: people tend to think in terms of “what is” and not much about “what could be.” But if modern history has taught us anything it’s that the future holds pleasant (human-created) surprises that most could not foresee. One classic example: “hundreds of millions will starve,” it was predicted in the 1950s and 1960s with Malthusian overtones, as the world’s population exploded. But then came the “Green Revolution” of hugely expanded “miracle rice” production in the East, and far greater agricultural productivity in the agribusiness West. World malnutrition has plummeted since then.

This is not the place to list all the future possible solutions to Israel’s no-place-to-put-its-population “problem,” but I will venture two. The fact that they might seem outlandish is precisely the point: they might not happen, but other no less likely solutions will surely be found. First, landfill Israel’s Mediterranean shoreline i.e., adding residential land west of Tel Aviv (or other, less populated beachfront areas). This is not a futuristic technology. Anyone who has been to lower Manhattan or to Dubai can easily see how doable (if not inexpensive) this is. Indeed, I would add (only half tongue in cheek) that it could solve the Israel-Palestine conflict by creating a huge East Bank for Israel – enabling handing “back” the West Bank. A second, far more likely solution: Israel continues building “up” (residential towers of 30 stories are very popular) while moving almost entirely to a work-from-home environment through Virtual Reality and other futuristic communication technologies. At one stroke this would significantly reduce Israel’s carbon footprint, drastically lower its huge loss of work hours on the roads, and ultimately also free more land from today’s concrete highways to become green, residential areas.

However, all of these are “technical” aspects and solutions regarding the population “crisis.” In my opinion, the biggest benefit of increasing population numbers lies elsewhere: social psychology. In short, countries whose population is growing are upbeat about the future; stagnant or declining population countries represent (and are felt by the populace to be) stagnant societies. It is no coincidence – although it is impossible to “prove” any direct causation – that Israel is one of the few western countries with a rising population, and simultaneously has one of the most vibrant economies (with close to the strongest currency in the world today!). When people subconsciously feel that they are living in the midst of a vibrant society, they will be happier (Israel is near the top of international “happiness” surveys) and more productive. Note: “more productive” also means finding real, original solutions to burning problems.

Twenty million Israelis living in the country by 2050?!? Bring it on. Yes, it will offer challenges, but it also means doubling the country’s brainpower to meet those challenges. If “two heads are better than one” then certainly 20 million tomorrow are preferable to 10 million today.