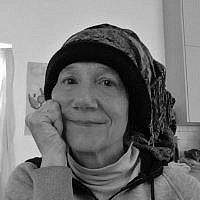 The Blogs
Yaffa Bruckner
Apply for a Blog
Advertisement
Please note that the posts on The Blogs are contributed by third parties. The opinions, facts and any media content in them are presented solely by the authors, and neither The Times of Israel nor its partners assume any responsibility for them. Please contact us in case of abuse. In case of abuse,
Report this post.

I watched the rain, looked at my soggy socks, and decided to buy a dryer. But where could I put it? Hordes of professionals tramped through my apartment to help me find space. Most came and left, and I never heard from them again. I finally found an olah chadasha from Scotland, who specializes in design for small spaces. “Knock down this wall! Take out the bathtub! Move the toilet! Replace the sink!” she advised. It sounded drastic, but I had a hamper of unwashed hosiery. I signed on the dotted line. Right before the work was scheduled to start, she called to say that she was leaving for Italy. She handed me off to a kablan named Mohammad.

I went to Talpiot to buy a sink, a toilet, faucets, and a towel rack. I wanted green tiles for the floor and walls. The vast selections overwhelmed me. I came home exhausted, and empty-handed. When Mohammad asked me about the bathroom, I told him about my trip to Talpiot. He told me not to worry. Everything I needed was in his village.

He picked me up at my apartment and we drove along the Goldman Promenade and, just before the United Nations Compound, he turned left. As we descended a steep cliff, he said that his village is named Jabel Mukaber, the Mountain of the Prophet. The narrow road had switchbacks. When the road turned west; l had a panoramic view of Jerusalem. When the road turned east, I looked down the valley to Jordan. Somewhere in the middle, I would find what I needed for my bathroom.

Towards the bottom of the cliff, Mohammed pointed to caves. He explained that workers exposed these caves while widening the road. I watched the construction workers carry coffin-sized containers out of the caves and line them up along the road. I wondered about this, but my contemplations got interrupted. We had arrived at the bathroom supply store.

The two-room showroom had a modest selection of wares in black, white, browns, shades of tan, and grey. I wanted more color. I dithered. Mohammed stepped in and patiently guided my decisions. In about 30 minutes, I had chrome faucets, a white toilet, and a vessel sink with vanity. I was thrilled when I found a floor tile with mauve. I put in my order.

After shopping, Mohammed took me to his home. His sister welcomed me and invited me to sit in their front parlor (see https://www.housebeautiful.com/design-inspiration/a36423416/arab-majlis/ ). She served me a cold drink then took me on a tour of the house. The elegant rooms had cornices, filigree ceilings, and arabesque designs. I saw the same color palette that I had just seen in the store. When I thanked her for the hospitality and the tour, she gave me a hug and invited me back. We drove back through the village. The signs were in Arabic. I felt as though I had visited another country.

I have friends, who condemn me for hiring a non-Jewish kablan. People are shocked when I tell them that I went to East Jerusalem. I understand their sentiments. People get knifed while crossing streets and blown up while waiting for buses. I had not considered the larger picture. I focused on my need for dry clothes. I did not expect the Scottish olah to go on vacation and hand me over to a kablan named Mohammed.

I think about the construction site. The stone coffins may be ossuaries and contain human bones. I consulted Google. Ossuaries were used for burials 2,000 years ago (see https://www.jewishvirtuallibrary.org/ossuaries-and-sarcophagi). Jewish burial practices had two stages. When people died, their bodies were put in coffins. After the bodies decayed, the dry bones were removed and placed in ossuaries. Google Maps tells me that the City of David (see https://cityofdavid.org.il/en/archeology/excavations/givati-parking-lot ) is a 15-minute walk from Jabel Mukaber. Did the people from the City of David bury their dead in these caves? I have no idea but someone should come and investigate.

I look at my dry socks and think about what happened. I ripped up my bathroom, reconsidered my color palette, and scaled a cliff in East Jerusalem. I saw caves at a construction site that may contain human remains dating back to the Second Temple Period. I met a kablan named Mohammed, who showed me patience, hospitality, and elegant craftsmanship. He and his sister invited me to come for another visit. I may go. After all, I have friends in the Mountain of the Prophet. 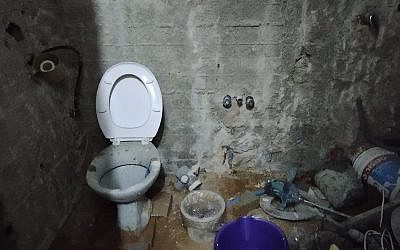 Bathroom during renovation (courtesy of author) 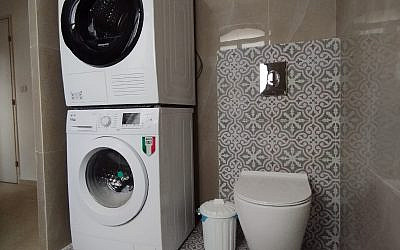 Bathroom after renovation (courtesy of author)
About the Author
BA in anthropology, Barnard College, New York City; MS in physical therapy, Boston University, Boston, MA, MA and PhD in bioanthropology, Indiana University, Bloomington, IN. Yaffa has worked with Bajans in Barbados, the Tohono O'odtham in southern Arizona, the Oji-Cree in northern Ontario, Canada, and warlords in the ghettos of Philadelphia. When she negotiated a ceasefire between two rival inner city gangs, she thought that she might be developing skills that could be useful on the streets of Jerusalem.
Related Topics
Related Posts
Yaffa Bruckner