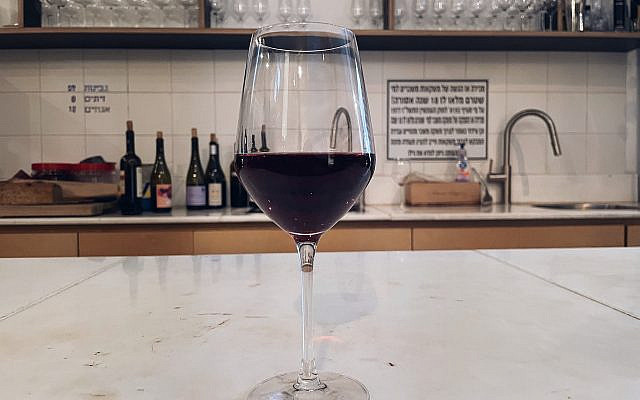 Complexity belongs in the glass, not outside it.

A valid photo I.D. must be presented before entry into this article.

Addressing in these pages not long ago the convoluted arrangements which Tel Aviv food & beverage establishments are made to adopt in order to “do” business, I took for a typical case a favourite local wine bar (“Who’s the Bosser?” https://blogs.timesofisrael.com/whos-the-bosser/). Where, as it happens, I sit now, before a bowl of wine and another of cheese, well before the fatal closing hour and with plenty of time to pair. Looking out over a glassy rim of horizon, as a Burgundy sunset drains beneath, it appears the bottle may serve the secondary use of conveying yet another crabby missive into the swelling mer of bureaucracy.

On the wall across from me hangs a sign—which is not a very uncommon place for a sign to be, nor a very uncommon thing for a sign to do. But this sign, in joyless black and white, rather saps than adds decorative life and energy to the room. And with its stuffy literariness and blocky font and promiscuous use of bold and sudden change of font size, and the add-on of an unnecessary exclamation mark to make its literal point, seems very much to want to be taken seriously. 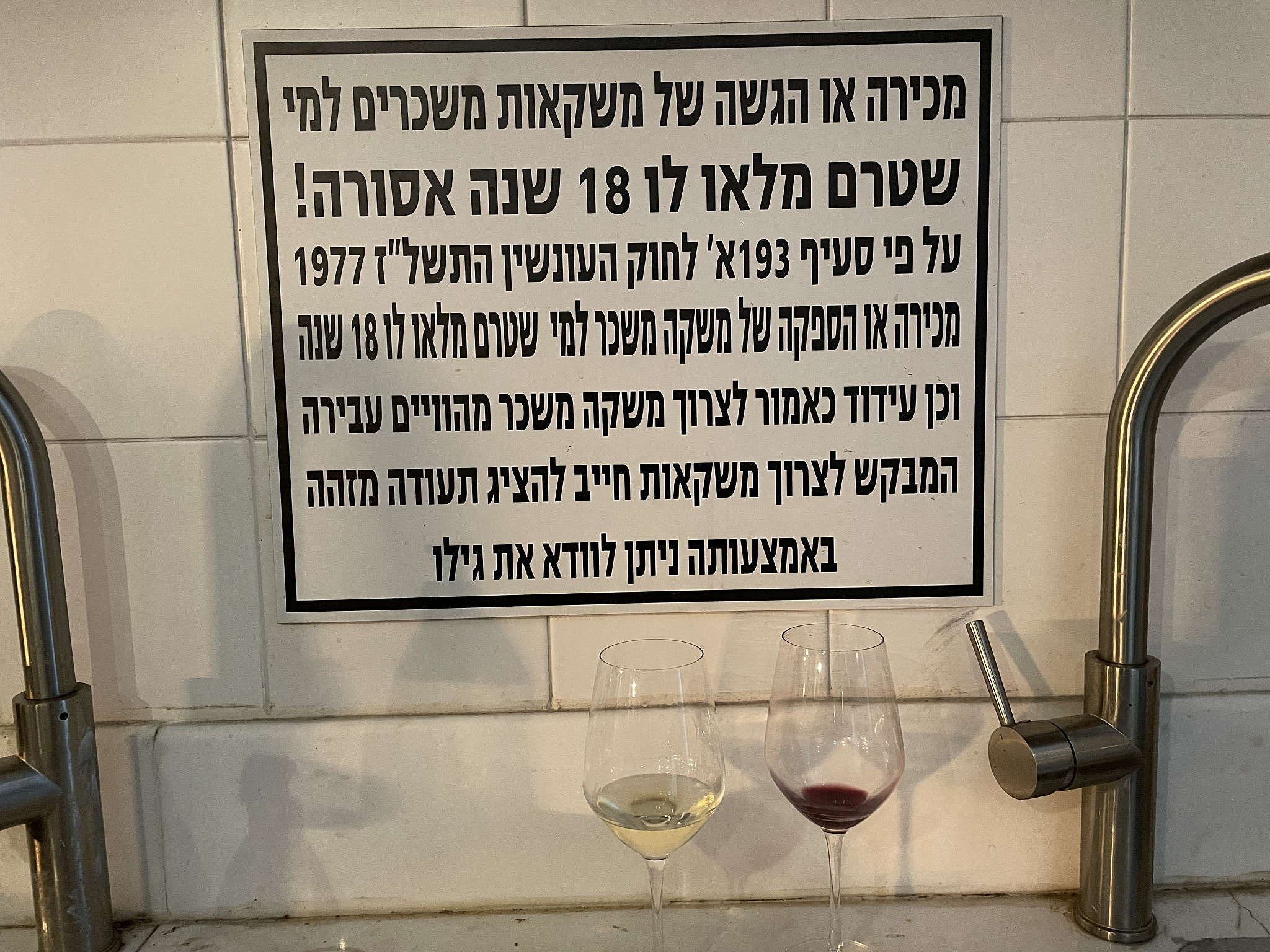 The sober banner recalls the first thing which anyone walking into a bar already knows, and the last of which anyone walking into a bar needs reminding. Namely, that in this country—the one, that is, you happen to be in–the serving of alcohol is limited–by law, that is–to those only who have attained the age of at least eighteen years—that is, no younger. As obvious, almost, and unnecessary as those labels on liquor bottles which tell the drinker that drinking alcohol makes one drunk (and goes on to tell him that this can be a very bad thing indeed, especially when the handling of machinery is involved, which it certainly advises against).

They can’t be everywhere at once, but in this the government’s stand-in for the hall monitor, we glimpse the unhealthy itchings for a monstrous omnipresence. That anyone imagines this serving up of the law serves the public by serving the purpose of preventing the serving of certain customers, thinks less rationally than the drunk teenager it apparently improves. 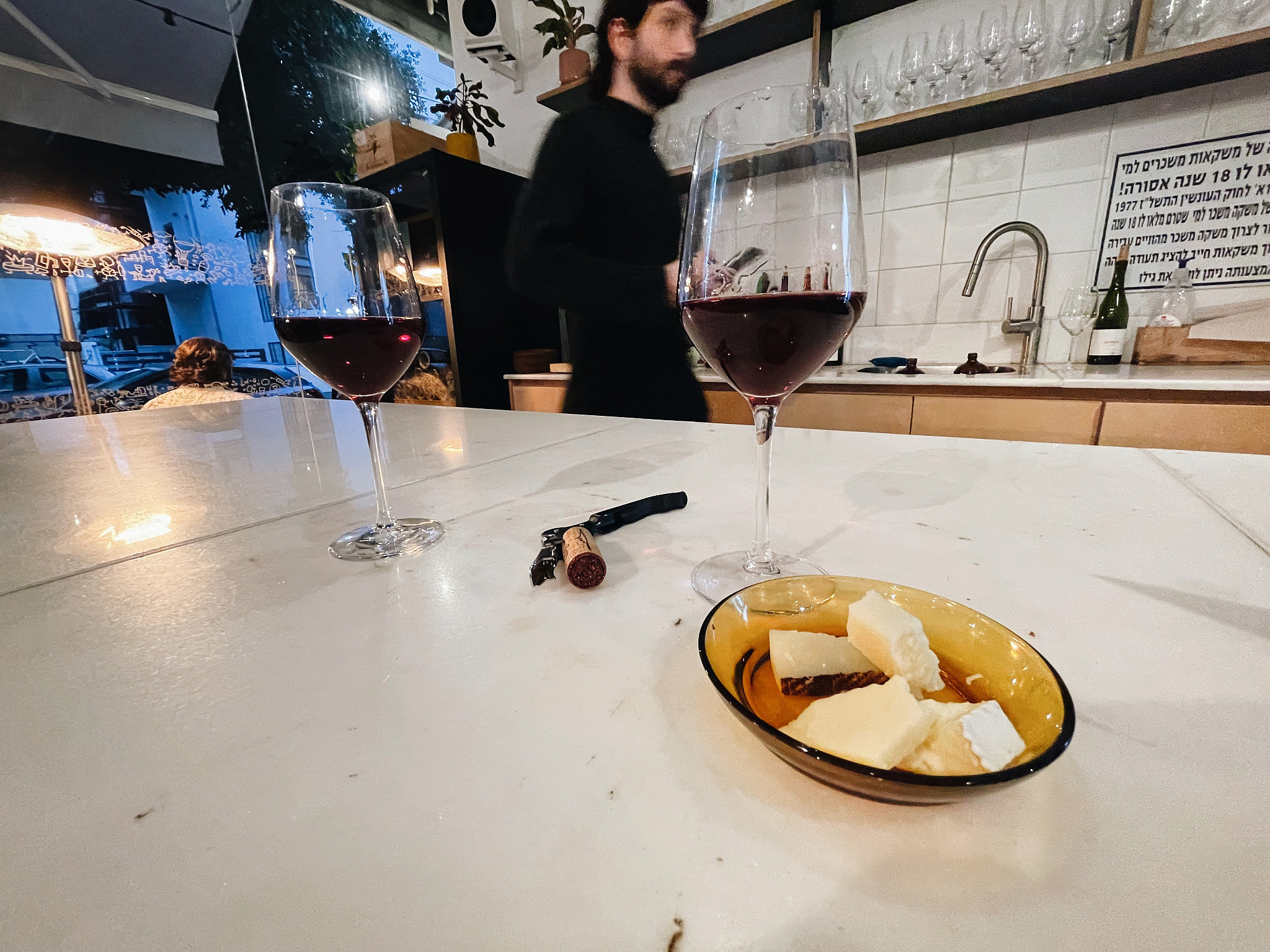 The central question is manifestly why. Why do the brilliant on-highs persist in regarding us as a lower and less intelligent evolutionary offshoot? Why do they paternalistically insist on treating us as Non Sui Juris? Why and when and just how did our politicians, from collecting monies for the purposes of upkeeping an army and a road, shift into the parental rôle, and start exhorting us in the most banal moral tones? I’m sitting on a stool at a bar, but I feel I ought to pull up a high-chair. To ask any of these questions will earn you the same unsatisfactory open-palmed answer: ipse dixit; ככה; “just because”. More of a response, really, than an answer. Sourcing the original logic behind any bureaucratic item seldom leads one to a conclusive point, but rather to an eternal chase after three of them…

…But we are nonetheless obliged to ask: What person with the intent to purchase liquor in Israel, (or any country for that matter), is not aware that in Israel, (or whatever the country in question), the purchasing of liquor is 18+ years, (or whatever it happens to be elsewhere)? Well, probably just such a person who would be incapable of, well, reading, no less of comprehending, and even less of following, just such a directive. In words more colloquial, if you are too dumb to know the drinking age of the country you live in, you are likely to be mentally deaf, too, to its messaging. And if you aren’t a resident of the country, then you likely don’t read a revivified dead Semitic language, anyhow, especially not the literary version. I imagine the gallivanting holidaymaker or freshly docked immigrant would not anyway care for the schoolmarmy legalese of Article IV Section 5.3 of Book II of Volume VII of Federal law. (Or, if we are being precise–because ‘precision which misses the point’ is a good definition of bureaucracy–Section A193 of the Penal Code 5737 /1977.) Such a mordant and pedantic piece of literature can not have much hope of winning a reader’s attention, no more so his respect and obedience. (If anything, really, it makes one crave a drink.)

Tourists, besides, typically allocating so much of their limited time to tasting as much as they can, can reasonably be expected to know the drinking age of the country they plan on doing so much of putting things into their mouths in. The underaged carouser abroad likely belongs to the very last denomination to give a whiskey-flip about committing a yea-yea misdemeanor, while the adult vacationer I suspect has little interest in purchasing bottles at the urging of underage urchins in search of Mother Gin.

And yet, these are the only people to whom such a baseless banner can be relevant. The sign, then, informs only those who already know the information it seeks to impart, and can hardly succeed in informing those who don’t, while be interesting to neither. The childish and obvious injunction presupposes both employee and -yer to be either ignorant of the most basic knowledge, or negligent of it. It further offends their civil dignity by presuming that, absent an official reminder, they would tend to criminal inclination and risk revocation of their vital and very expensive liquor license. And anyway, for all its urgent bluster, a sign read once is a sign thereafter ignored, and soon comes to blend inconspicuously with the furniture. 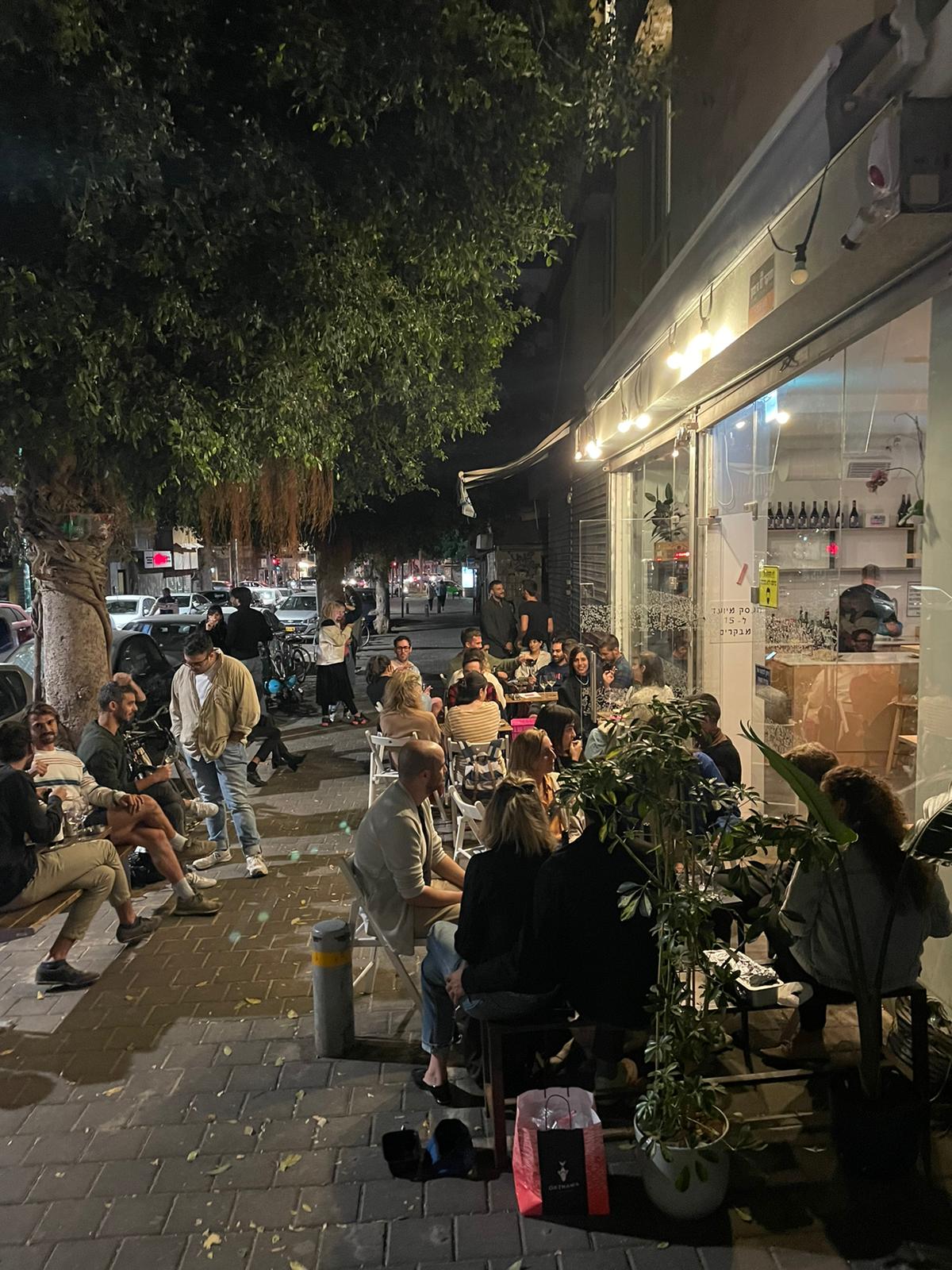 Since the bluff reminder isn’t doing much reminding, perhaps those solemn, official block letters are designed to deter, meant as a sort of prophylactic against those 17 and a halfers who would fain have a beer before attaining to the ripened age, in a few month’s time, of reason and maturity. I would however posit that a seventeen point fiver determined enough to walk through the shiny glass doors into a wine bar and nervy enough to face the bartender will not, once there, be much deterred by a flat paper poster, and is more likely to mock than take it seriously; and, for that matter, that someone <18 = someone not tramping into fine wine bars in the first instance. Getting drunk, as swiftly and cheaply as time and circumstance will allow, is foremost in the spongy adolescent mind. The teenager doesn’t come to twinkle his sharp nose in the ambrosial exhalations which waft out of a Burgundy glass, or showcase his keen palate, attended by knowledgeable commentary, between each exquisite slurp from the tastevin (and he is not the delinquent the law addresses if he does). Your average intemperate teenager does not come to put on a pleasant ‘buzz’, as a happy spiritual perquisite to the palatal enjoyment of a Barolo. He comes not to get tipsy, but to get wasted, hammered, plastered, and all other manner of construction-site adjectives. (I myself prefer the upgraded ‘shwasted’, which takes your average ‘wasted’ to an elevated level of debauch.) 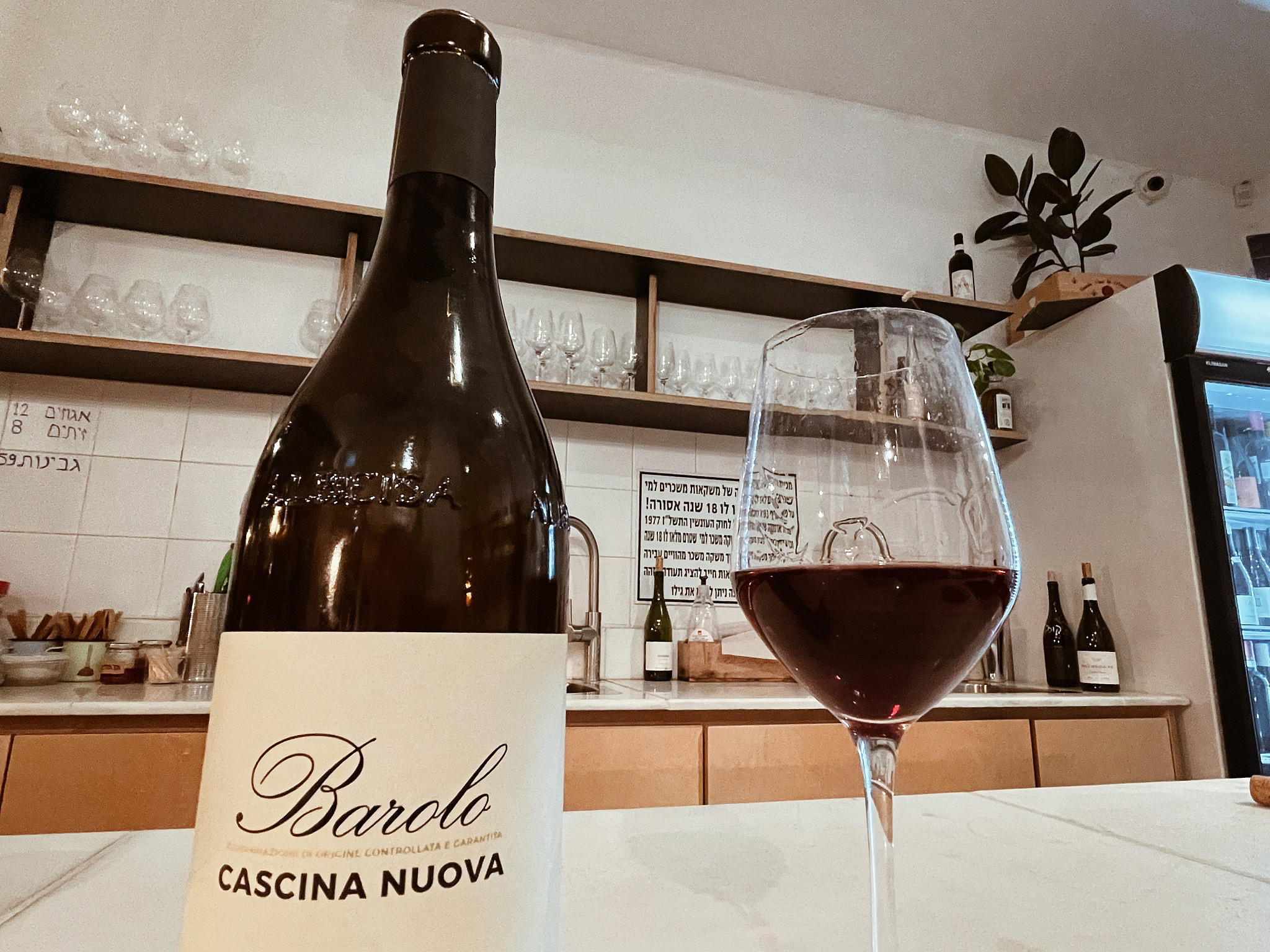 Complexity in one’s glass is a positive feature, navigating it one of wine’s pleasures. To navigate the subtle and noir rules governing one’s bottle, however, is to be given a headache without the pleasure inducing it.

Does anyone in view of this cheerless broadside bring to it anything other than a tedious indifference? Has anyone who has stood before its megrim-making legalese actually took the occasion to read each dull and leaden word? Or do people, taking notice at all, fixate for a flash on the “!” character and the numeral “18”, quickly get the point, as quickly forget the point, and as quickly as possible move on to the point of their being there in the first place, namely the consumption, without fuss, of an adult beverage? Nor will the lawful boozer be much deferred from his liver-led endevours.

I should like to have it explained to me the “real life” impact this priggish and parental advisory notice has, and what, really, would be the difference in the “real world” of that “real life” if it were taken down. Let a representative try explain the official position. My own opinion, the common sense of which I believe to be as common and sensical as can be, says that statistics will stay static, and drinking society remain as it is, becoming no more or less Gatsbian than it currently stands (however wobbly that stance may be.) I little suspect the public weal, the public welfare, the public health, or the public morality will be much enriched or impoverished either way. (The public exchequer, however, may suffer some, at the rate of a hundred or so shekels per sign; As a stinging post-script to the letter and spirit (as it were) of this law, the business itself is charged with the purchase and task of instillation.)

Thus, here is a sign with no signal; a notice which goes unnoticed. It says too much of nothing at all. It reminds of something that doesn’t need reminding, and as a deterrence against crime it is a pallid prophylactic. A waste of money and, even if money didn’t speak, words. 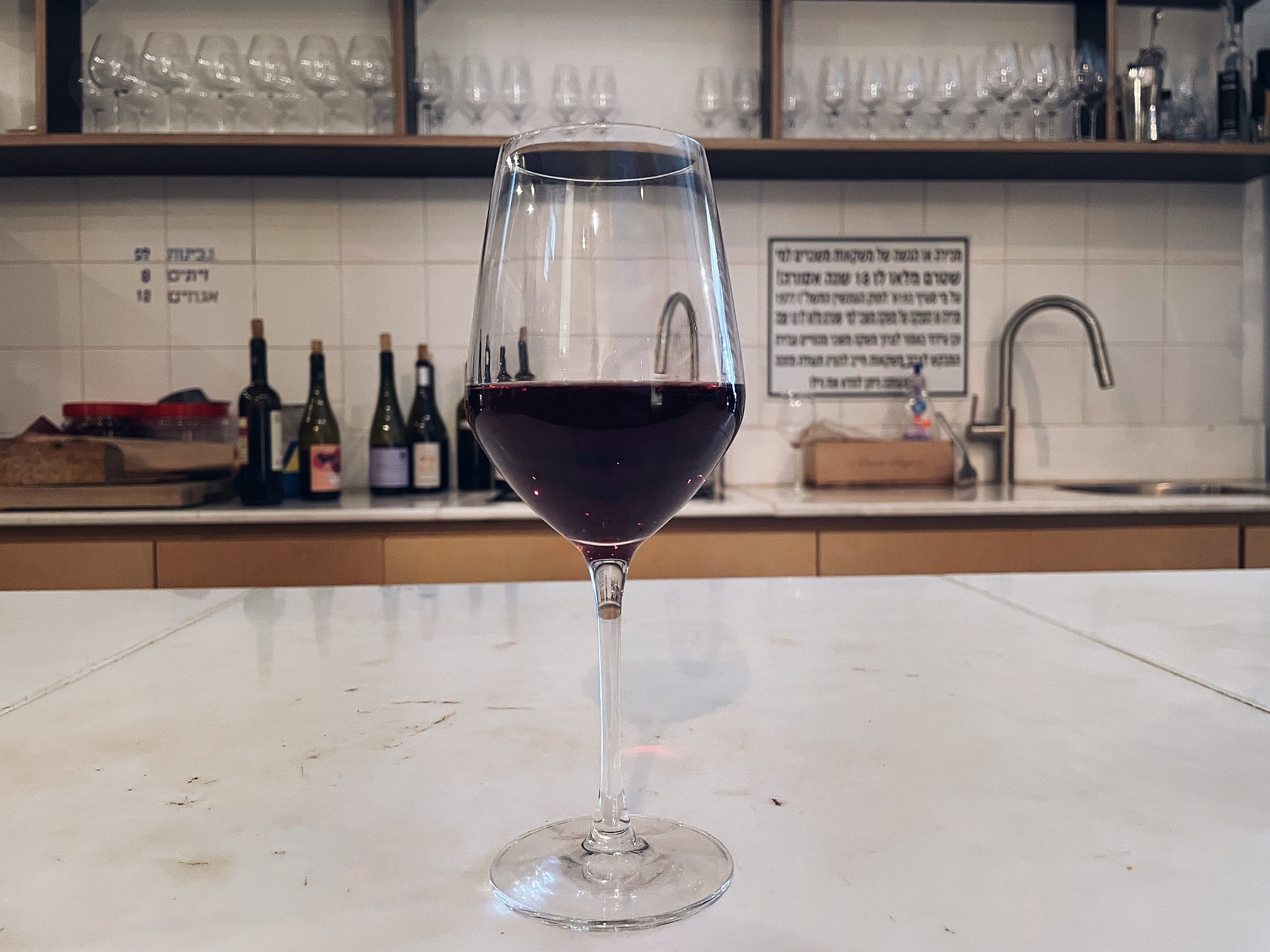 From “Grape to Glass” omits a whole vineyard of arid and spindly bureaucratic ground between.

The requirement is, however, just one example of a constellation of captious regulation which Israeli business is expected to navigate. How many customers you may admit inside, how many chairs you may have outside, just where to the millimetre those chairs may be laid, how large the sing giving your business’s name may be. And to mention the mystic rules guiding the open flame in the kitchen requires a shamanic knowledge and experience and the patience of generations I don’t possess nor wish to acquire.

In order to “do” business, businesses are loaded with a lot of dont’s. These remarkably petty and so often utterly superfluous rules set enterprising business on a vertiginous path, at once longer and more winding than it need be, rendering enterprising business at once less enterprising, while doing less business. This is particularly the case if it is your business to handle anything ‘live’ or fermented or potentially toxic in sizable quantities or addicting. Bacteria, healthy? No-Kam-bucha. Got qat? I think not. Fermented coffee? Kofi An-none. Unpasteurized cheese? Utterly impossible. Vino? Emphasize that last syllable.

From “farm to table” doesn’t mention the crowding chairs, “Grape to Glass” omits a whole vineyard of arid and spindly bureaucratic ground between. Complexity should be found in the glass, not outside it. 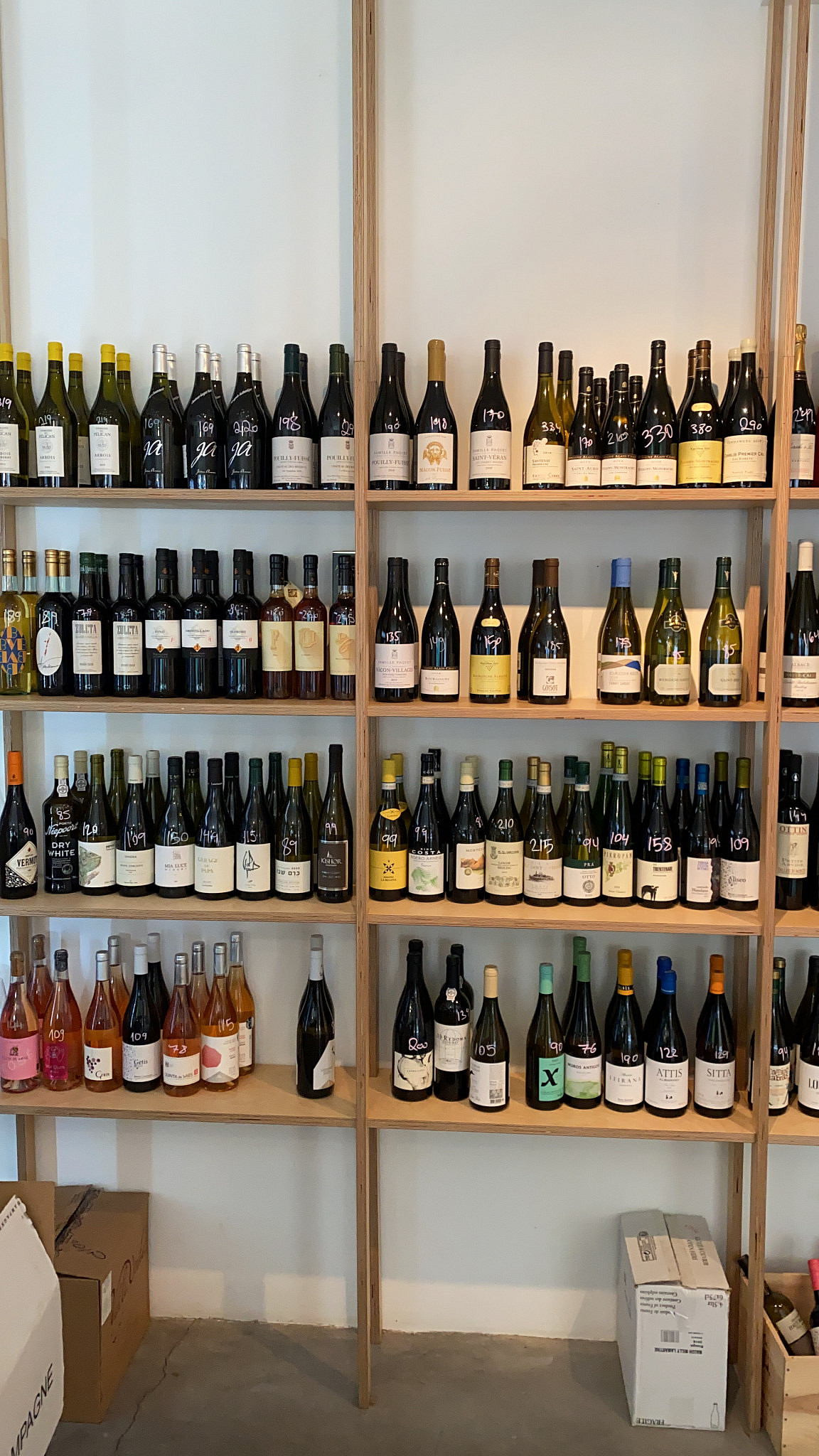 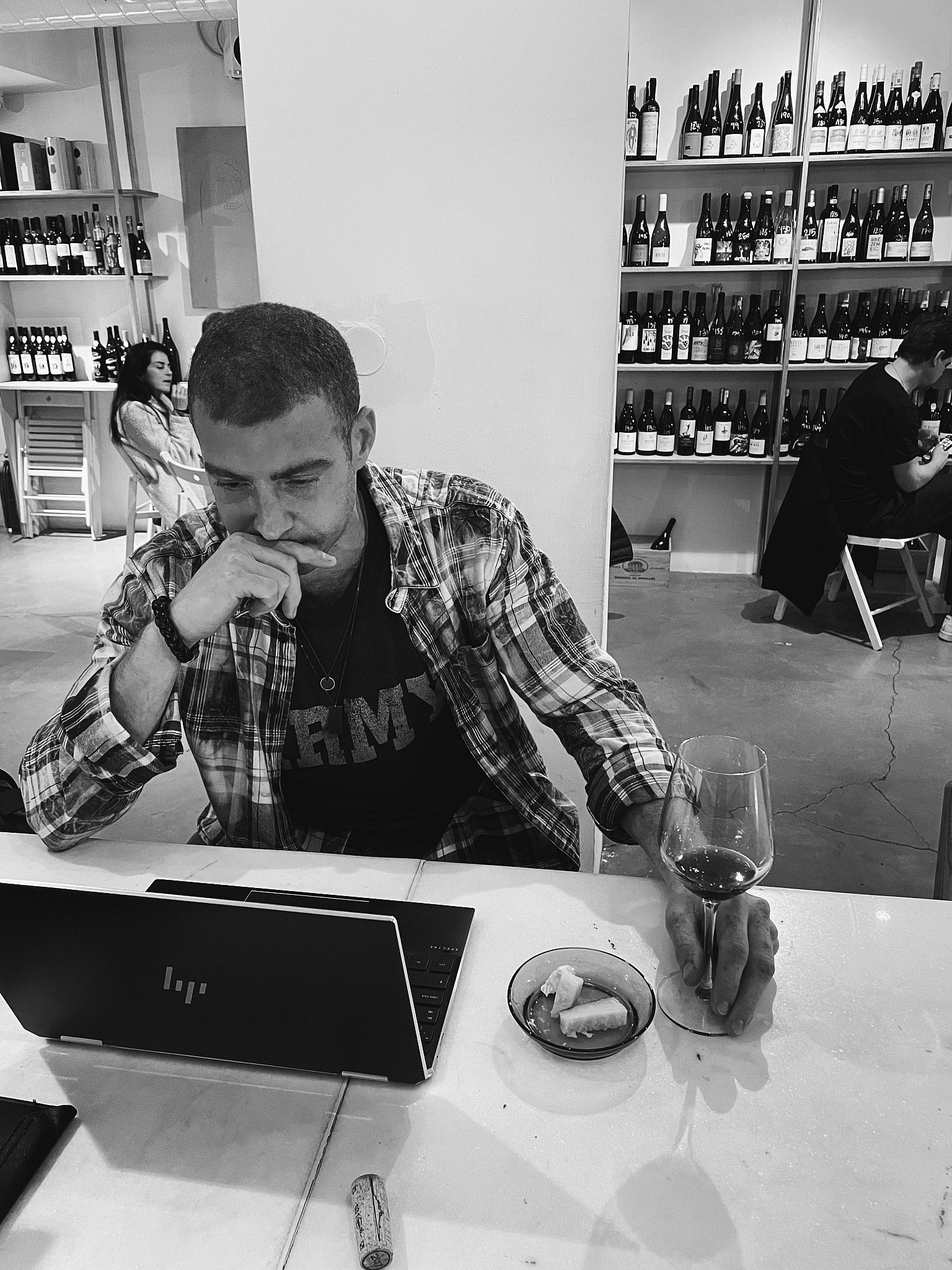 A concentration as deep as the fathomless bottle.
About the Author
American by birth; Israeli by birthright. TLVivian by residence. By the year, enough of them. Haim, namely.
Related Topics
Related Posts
Comments