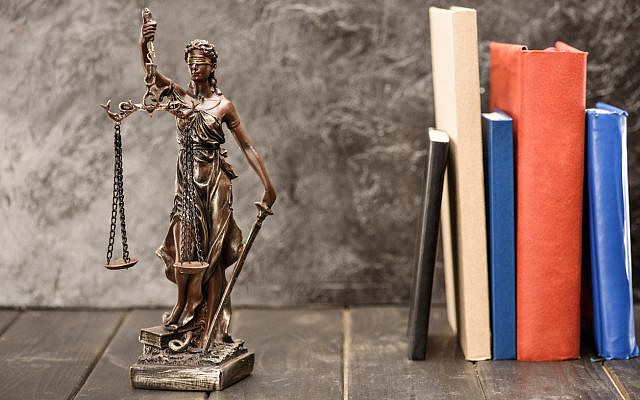 Illustrative. Lady Justice and the books of law. (iStock)

One of many classic West Wing episodes, “Take the Sabbath Day” (season 1, episode 14), portrayed its characters’ struggles with the notion and implementation of capital punishment – including how to juggle personal beliefs with fulfilling their various roles in the American government.

After a difficult conversation with his rabbi, Toby Ziegler has another with his boss, President Bartlet, who is facing the difficult decision of whether to commute a death sentence.

TOBY: I had a strange experience this weekend. One of the P.D.s on the Cruz case, I guess trying the things you do when you’re desperate, he went and spoke to my rabbi.

TOBY: I know. But the fact is that, even 2,000 years ago, the rabbis of the Talmud couldn’t… [tries to find the right word] …stomach it. I mean, they weren’t about to rewrite the Torah, but they came up with another way. They came up with legal restrictions, which make our criminal justice system look… They made it impossible for the state… to punish someone by killing them.

BARTLET: We make it very hard to kill anybody in this country, Toby.

TOBY: It should be impossible.

BARTLET: But it’s not.

TOBY: But it should be.

Toby had earlier made the same point to his rabbi that the president made to him, arguing that “the Torah doesn’t prohibit capital punishment.… It says, ‘An eye for an eye.’”

Indeed it does, in both Exodus 21:24 and Leviticus 24:20 — and yet, Jewish scholars have always maintained that, unlike capital punishment, “an eye for an eye” is not meant to be carried out literally; instead, the courts assess a proportionate monetary fine. (Capital punishment is also actually not technically impossible in rabbinic law as Toby might have it, just very improbable.) Rambam points out that this is one of those details of Torah law no one disputes – though the Rabbis did find something to argue about:

“…they are received through tradition and there is no dispute about them… When you see in the Talmud that they give and take and argue… it is not because the matter is uncertain to them… they simply investigated the teaching contained in Scripture for this accepted explanation.”  (Introduction to Rambam’s Commentary on the Mishna)

As it turns out, the Gemara spends several pages disputing this one, trying to figure out not whether “an   eye for an eye” should be understood as mandating monetary compensation, but why it means that. In the Gemara’s phrasing, “Why? The Torah says, “an eye for an eye”; say it’s an actual eye!” (Bava Kama 83b)

There are a lot of different ways to answer that question without resorting to an emotional abhorrence such as Toby credited with near-abolishment of the death penalty. (Note also that, as Dr. J.H. Hertz points out, “an eye for an eye” at that time was a limitation from typical ancient world behavior: one could seek no more than one eye as punishment, and everyone’s eye was considered equal.) The following pages of the Gemara are replete with them — a stream of different types of arguments offered to support the non-literal interpretation. Further permutations of these approaches appear in later texts too, as scholars attempted to justify overturning an apparently straightforward law.

If we examine those different types of argument, however, we might find that they are more similar, and simultaneously even more embracing of variety, than they at first appear.

One type of argument is based on the sort of midrashic connections and inferences that depend heavily on tradition. For example, the word “strike” appears both in the context of harming a person and in the context of harming an animal, and a beraita infers that “just as one who strikes an animal [is obligated in] monetary compensation, so too one who strikes a person [is obligated in] monetary compensation.”

This sort of analysis is tricky: absent a solid consensus that a particular law has traditionally been derived from a particular pair of texts, how do we really know which instances of the same word to pair up, or which sheds light on the other, or which element of halacha the pairing addresses? Indeed, the Gemara points out that the beraita’s proof is complicated by the fact that the word ”strike” appears multiple times, and questions which occurrences might legitimately serve as prooftexts for the claim that “an eye for an eye” should not be taken literally. Perhaps because of those difficulties, the beraita itself offers an alternative basis, working with a different pair of texts – but the alternative, of course, is not without its own difficulties as an absolute proof.

This sort of analysis inherently depends on tradition, or it has no force. Anyone can come up with a fancy word game, but we need more than parlor tricks to cancel the literal meaning of a straightforward Torah command – just as we cannot change Torah law in accordance with what we can or cannot “stomach.”

As the debate continues, as well as over the centuries since, other types of arguments are introduced: more peshat-based textual proofs, as well as logical arguments that point to the impossibility of carrying out “an eye for an eye” in its literal sense.

Leaving the Gemara for now, let’s explore some later examples. Ibn Ezra recorded a polemic between Rav Saadia Gaon and a Karaite by the name of Ben Zuta. Saadia’s argument is a careful appeal to logic: He begins with the claim that “we are unable” to explain the verse literally, because “how is it possible” to diminish a person’s sight to the precise degree that he diminished someone else’s, or to inflict precisely the same wound? “The mind doesn’t bear it.”

In response to this logical argument, Ben Zuta turns to text: But that’s what it says! The verse in Leviticus continues, “The injury he inflicted on another shall be inflicted in him”; the preceding verse similarly states “as he has done so shall it be done to him.” What could be clearer?

Here Rav Saadia turns to parallel texts — not the way the Talmudic midrash does, but for idiomatic precedents that support reading the words his way and not Ben Zuta’s. He argues that the bet prefix does not have to mean “in,” with the connotation of inflicting something in another person’s body; it can mean “upon,” and thus the verse means “shall be imposed upon him,” in the sense of a monetary fine. As far as “so shall it be done,” he points to a parallel phrase in the story of Samson (Judges 15); the retribution there was not precisely in kind, and neither is “an eye for an eye,” though both are described as if they were.

When it comes down to it, though, the Gaon’s perspective is not a celebration of objective rational reading of text as a means of determining law; it is a polemic against Karaism — against understanding the biblical text literally. And so, after further debate, Ibn Ezra asserts that “we are unable to explain fully, on the path of the Torah’s command, if we do not rely on the words of the Sages, of blessed memory.”

Perhaps he is suggesting that the pursuit of an objective reading, totally without recourse to tradition, will simply lead us in circles: one reader sees it this way, and another one sees it that way. The Gemara, generations earlier, includes suggestions like Saadia’s, and found them just as liable to have holes poked in them as are the midrashic inferences.

We might ask, then: What is gained from the litany of “proofs,” if none can be said to be the objective proofs that will settle the stomachs of anyone worried the Torah might mean “an eye for an eye” literally?

On one hand, the list conveys a sense of fundamental unanimity. At one point in the talmudic discussion, one sage is actually quoted as saying what sounds like the literal interpretation, and the response comes swiftly: “Does he not agree with all these Tannaim?!” The implication being that of course he does – everyone knows it is not literal! – and so the Gemara goes on to reinterpret his statement in keeping with the non-literal reading. Because as Rambam points out, they might disagree when it comes to sourcing the interpretation but everyone agrees it is the right interpretation. Because ultimately, it all comes down to tradition: we do not take it literally because our teachers did not take it literally, and their teachers before them, all the way back. That is the nature of Oral Law, and that is its force; the “proofs” are just icing.

In fact, we might suggest that one point of mentioning all those proofs is precisely to reject them. The structure of a talmudic debate, like this one that takes the law as a given and only argues about how we know it is the law, ultimately showcases the law as an absolute, independent of any proofs. The Gemara pokes holes in each to tell us we do not need any; the law stands pure and proud on its own.

At the same time — it is not that these arguments are stupid, just that not everyone finds them convincing. After all, each was suggested by one of our esteemed sages! And so, at the very moment that the Gemara is telling us we cannot rely on the suggested proofs, it also teaches them to us and teaches that they have value.

Perhaps the Gemara wants to offer this array of arguments to honor the multiple ways we might each connect with tradition and text. Lest we find it difficult to stomach a non-literal reading of the verse (“But that’s what it says!”), there is a plethora of options available to us. As Rambam notes, “though they are received through tradition and there is no dispute about them, behold, from the precision of the scriptural text that was given to us, it is possible to derive these explanations…” We know the law without them — they are not really sources or proofs — but we have them, and so each of us can study and come to terms with the law in our own way. The list as a whole might be more compelling than any of its parts — and each of its parts might satisfy one of us like it apparently satisfied the sage who suggested it.

Halacha strives to be objective, but we individuals are subjective. Our individual understandings of the objective laws also make up an invaluable piece of tradition.

About the Author
Sarah Rudolph is a Jewish educator and freelance writer. She has been sharing her passion for Jewish texts of all kinds for over 15 years, with students of all ages. Sarah's essays have been published in a variety of internet and print media, including Times of Israel, Kveller, Jewish Action, OU Life, Lehrhaus, and more, and she serves as Editor-At-Large, Deracheha: womenandmitzvot.org. Sarah lives in Ohio with her husband and four children, but is privileged to learn online with students all over the world through Webyeshiva.org.
Related Topics
Related Posts
Comments