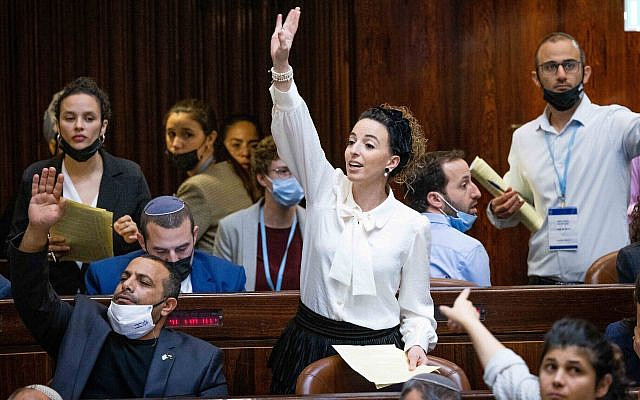 MK Idit Silman, center, MK Abir Kara, left, and others vote on the state budget at the assembly hall of the Israeli parliament, in Jerusalem on November 4, 2021. (Yonatan Sindel/Flash90)

So, on the morning of a terrible day, of three funerals, one after the other this afternoon, 3:30, 4:30, 5:30, of three young men, two, 27 years old, the third, a 35-year-old father of three — yes, the toll went up, sadly; three young men just out in Tel Aviv at a cafe/bar last Thursday; one of them, recently engaged, planning his wedding, out with his buddy, both killed; the third, hung on, doctors fighting valiantly, and losing that fight, to save his life–

Does anyone have a Hebrew translation of John F. Kennedy’s book, Profiles in Courage?

Because Idit Silman, really, really, really, ought to read it. She’s the one who, in her unfathomable judgment, thought that this moment, now, now! — when the murderers are out with automatic weapons hunting civilians and gunning them down in Beersheba, Hadera, Bnei Brak, Tel Aviv — that now is an excellent time to leave the coalition and threaten the ability of the government to function. Threaten us with the prospect of another ruinous election that will end with the same, inconclusive results as the previous four. Except for the certain, horrific waste of public funds and the renewed evisceration of fragile social bonds, all in the name of electoral results that will, in any case, not be forthcoming.

Silman is Orthodox/Zionist and, we are hearing, was getting bullied in her synagogue, her children getting bullied in their schools, because she was in Bennett’s party and he has pulled to the center and is not fulfilling the right-wing agenda, etc., etc. And she’s a true rightist, and has to prove it. And, somehow she imagines that a restored Netanyahu would give her the time of day if he got back in. She might speak with Moshe Kahlon and Nir Barakat and Orli Levi-Abecassis (who?) and Benny Gantz (!) about what Netanyahu’s promises, even signed and sealed agreements are worth.

Someone ought to remind Silman and her backers and tormentors that there is no consensus for the right-wing agenda or there would be a right-wing government. You know, after four elections in two+ years, they could not get that. And the rest of us could not get something else. Which is why we have this coalition of eight parties which, despite vast differences, has managed to actually govern here, pass a budget, address long, long neglected critical domestic needs, including a serious fence to block murderers from PA-land coming into Israel; to plan transportation, health care, educational and economic reforms, environmental protection. To govern. Be in government not in order to sabotage legal proceedings against themselves, in particular, against their thrice-indicted PM, but to, you know, govern. A concept lost and plowed under during Netanyahu’s years.

As commentator Anshel Pfeffer has noted, instead of joining those using mafia tactics against her, Silman might have told them where to get off. Might have set an example for her children, if nothing else, but also for all of us. She could even have made a speech about how this is difficult for her but, now of all times, despite the ideological discomfort and the tactics to which she and her family are being subjected, she will stay the course– and continue to work for implementation of her right-wing principles– while keeping the good of the whole country uppermost. Including the good of so many families and friends reeling from the losses of the last two weeks.

But no. Instead, she jumps ship.

If only her monumental lack of judgment did not affect the rest of us.

The families of today’s horror have said: No politicians are to come to the funerals. They are to be spared that, at least.

But, seriously, does anyone have a Hebrew translation of Profiles in Courage? You know, about politicians acting against personal interest and ideological purity on behalf of the good of the rest of us? Not sure Silman and her ilk would understand it, even in Hebrew, but it would be worth a try.